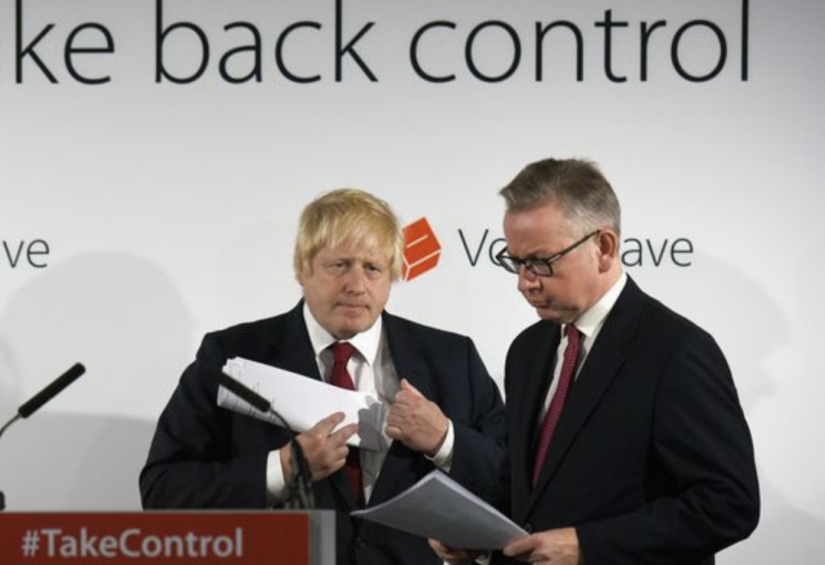 By James Cusick: Evidence that could lead to criminal charges against the pro-Brexit campaign led by Boris Johnson and his key adviser, Dominic Cummings, has now been passed by police to the criminal prosecution authorities, openDemocracy has learned.

Last year, the Electoral Commission found that Vote Leave broke electoral law by overspending during the 2016 European Union referendum, after the campaign funnelled £675,000 through another pro-Brexit group to avoid spending limits.

After nearly 16 months of investigating Vote Leave, the Metropolitan Police Service (MPS) handed a file of evidence to the Crown Prosecution Service last month. The initial formal referral by the police means they are now seeking legal advice from the Crown Prosecution Service on how to further build their case against Vote Leave, and where they need further evidence to advance the prospect of charges being brought. Vote Leave have always denied any wrongdoing.

The timing of the submitted file by the Met for what is termed “Early Investigative Advice” from the CPS could not be worse for the prime minister.

“I’m pleased that the Metropolitan Police have finally taken action on this, after sitting on the papers for 16 months. Vote Leave was the campaign fronted by the man who is now our prime minister, Boris Johnson, and his chief advisor, Dominic Cummings. It’s hard to imagine a more serious matter for our democracy. The CPS needs to reach a decision on this quickly so that trust in the electoral process is not further undermined.”

On the eve Conservatives’ general election campaign launch – a campaign widely regarded as designed and controlled by Cummings – there is now fresh controversy surrounding the 2016 Leave campaign, also masterminded by Cummings and fronted by Johnson.

With Brexit still unresolved despite years of parliamentary wrangling, and the general election widely regarded as a vote on whether or not to rubber-stamp the 2016 referendum result, the prospect of Johnson and Cummings being linked to potential criminal charges will be an extremely unwelcome development for the Conservative campaign.

Although the Met have made no public announcement, a Scotland Yard spokesman, responding to a question on the state of the Vote Leave investigation, stated: “On Thursday, 17 Oct 2019 the MPS submitted a file to the CPS for Early Investigative Advice in relation to the second investigation, which followed a referral by the Electoral Commission on 19 July 2018 and concerns Vote Leave and Be Leave.”

The Metropolitan Police had also investigated the pro-Brexit campaign group Leave.EU, headed by Arron Banks and Nigel Farage. However, in September Scotland Yard announced it would be halting its criminal inquiries. The Met said that “technical breaches” of electoral law had been committed by Leave.EU, but decided there was “insufficient evidence” to justify any further criminal investigation.

In this context, the Met’s decision to make a formal referral to the CPS on its Vote Leave inquiries is potentially highly damaging for those associated with its governance.

In this context, the Met’s decision to make a formal referral to the CPS on its Vote Leave inquiries is potentially highly damaging for those associated with its governance.

Alongside the leading roles of Johnson and Cummings, others involved in Vote Leave included the former Lord Chancellor and Justice Secretary, Michael Gove; the leader of the European Research group of MPs, Steve Baker; Nigel Dodds, the DUP MP for Belfast North; the Home Secretary, Priti Patel; the Foreign Secretary, Dominic Raab; and the Environment Secretary, Theresa Villiers.

A full file of evidence

A Home Office source told openDemocracy: “This EIA (early investigative advice) is effectively the Met asking the CPS what it needs to bring charges. It would not be doing this if it was not planning to deliver a full file of evidence on Vote Leave. It will of course be the CPS’s decision on whether charges are brought.”

In the three years following the Brexit referendum, multiple alleged breaches of electoral law, false declarations and covert campaign over-spending were investigated by the Electoral Commission.

Last year, the Commission found that Vote Leave exceeded its £7 million spending limit after failing to include in its spending return £675,000 that it donated to BeLeave, a pro-Brexit youth campaign headed by Darren Grimes. The money was spent on targeted Facebook ads in the final days of the campaign.

Vote Leave was fined a total of £61,000 and referred to the Metropolitan police. Grimes was initially fined £20,000 but this ruling was later quashed on appeal. The judge ruled that the Electoral Commission had set too high a threshold for determining whether Grimes’s campaign group was correctly registered – and further ruled that even if Grimes had committed an offence, the fine imposed was too high.

In October last year, after holding the Electoral Commission’s files for four months, openDemocracy discovered that the Met’s investigation had effectively stalled. A Met spokesman told openDemocracy that “political sensitivities” had to be taken into account – an admission which was widely condemned, with questions asked in the House of Commons. Labour’s deputy leader, Tom Watson, said that breaking the law during “one of the most critical moments in the UK’s history” made it of “urgent national interest that the police investigate what happened, how it happened and who was responsible.”

Although such demands are now closer to being met, sources inside the Met told openDemocracy that it is “almost impossible” to imagine anything further on this being released during a general election campaign.

Sarah Clarke from Unlock Democracy, a group which campaigns for political accountability through a written UK constitution, told openDemocracy today: “It’s the eve of what looks set to be one of the dirtiest general election campaigns in memory. Boris Johnson and one of his closest advisors are fighting a Brexit election based on a campaign won through potentially criminal activity. It has taken significant effort on the part of campaigners and journalists to even get to this point. Whatever the outcome of the Met’s investigation, damage has already been done to the integrity of our elections.”

She added: “There’s no chance of election law violations being dealt with seriously when the Electoral Commission doesn’t have real investigatory or fining powers. Even with action now being taken by the Met, money is coursing through the veins of elections and referendums in the UK. The insubstantial penalties for wrongdoing serve as an advertisement to those with deep pockets that breaking the law is a price worth paying.”