Skripal, Sturgess and Novichok – The mystery of the boy, the ducks and the wrong park 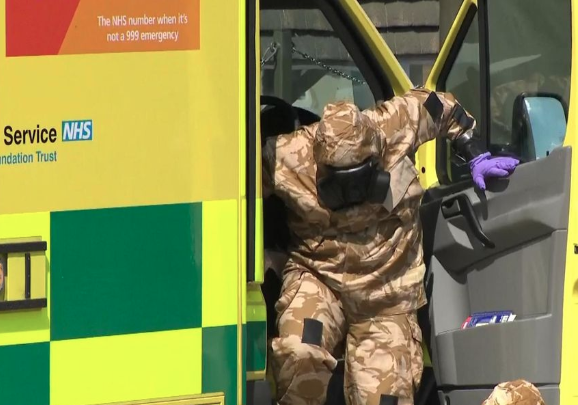 By TruePublica Editor: Back in March this year when the Skripal story broke, a cursory glance at the evidence showed that the government line in this incident was clearly suspicious. At the time we wrote: The pieces of this entire story are slowly coming together. The picture that is emerging is erroneous and spurious at best, at worst, it shows a desperate government at work to save itself from a chaotic implosion. Over the next four months we picked apart this story and wrote about the involvement of MI6, what the civil servants involved were saying and we posted the D-notices and censorship documents to the press.

The government has since continued with its implosion. Nine resignations in just twelve months, infighting, backstabbing and talk of leadership skirmishes, with the big beasts warming up for the big battle – hardly the stuff of “strong and stable.”

Then Skripal 2.0 arose with the poisonings of two more individuals, one of whom has sadly since died. This incident adds another dimension to the original story and if anything adds weight to the argument that highly trained professional Russian state-sponsored assassins were not at work as suggested by both the British and American authorities.

Here is an excellent piece by Rob Slane who happens to live close to the Salisbury incidents.  What Slane’s piece does is bring more information to the foreground highlighting many inaccuracies and unreliable evidence. This article is entitled:

It’s the Wrong Park! How the Ducks Raise Some Serious Questions in the Salisbury Poisonings

According to the Metropolitan Police investigation into the poisoning of Sergei and Yulia Skripal, here is a timeline of events on 4th March:

13:40: Sergei and Yulia arrived at the Sainsbury’s upper level car park in The Maltings. The pair go to The Mill pub.

Approximately 14.20: They eat at Zizzi restaurant on Castle Street

16:15: Emergency services are called by a member of the public to the bench where Sergei and Yulia are slumped on a bench

So: car park, pub, restaurant, bench. Simples? Not so, as we shall see.

On 28th March, an article appeared in the Sun, which talked about a 12-year-old boy from Salisbury, Aiden Cooper, who was apparently in a park with his parents, when he saw the Skripals and went over to them to feed the ducks:

“A schoolboy told yesterday how he was caught up in the poison spy drama after assassination target Sergei Skripal gave him bread to feed ducks. Aiden Cooper, 12, was playing in a park with pals when they saw Skripal and daughter Yulia beside a stream. They were handed bread and are among the last people to have had contact with the retired ­Russian military intellig­ence colonel, now fighting for his life.“

Of course, I would always want to have a large bucket of salt on standby when reading anything in The Sun, but in this case I see no reason why they, or the people quoted in the article, would make this up. In any case, the story was repeated in a number of other outlets (The Mirror, The Mail and Metro for instance), and it mentions that the parents only found out about the identity of the breadman when they were contacted by police.

For those of you not familiar with Salisbury, let me shed some light. The Avon Playground mentioned by The Mirror and The Mail is next to the Avon River, and it is also about 50 yards or so from the bench where the Skripals were found (as an aside, this is not the same Avon as in Stratford-upon-Avon. Avon is a Celtic word meaning river). As for Riverside Park mentioned by Metro, this may be a figment of their imagination, as no such named park exists in Salisbury. But the important point is that from the details given in these articles, nobody would think anything other than that the duck-feeding incident took place in the same park as the bench on which the Skripals were found.

Yet all three of these media outlets are wrong, and in a way that may well be very significant. Turning back to the report in The Sun, we find that it is by far the most detailed of all the reports on the duck incident. In fact, it appeared three days after the others appeared, with The Sun sending a reporter to interview the boy and his parents. Here is a snippet:

“Aiden and his pals are thought to be the youngest of 130 exposed to the nerve agent Novichok, said to have been unleashed in Salisbury by President Vladimir Putin…

Aiden’s family were alerted after cops traced him from CCTV pics.

Aiden’s civil engineer dad Luke, 33, said: ‘Obviously we had seen the incident on the news but didn’t think we were involved at all. Aiden was playing in the park with his friends when they spotted the Russian gentleman and his daughter. Kids being kids they went over and he gave them some bread and they fed the ducks. We didn’t think anything of it until two weeks later when then the police knocked on our door.’

It was terrifying. We took Aiden to hospital for a load of tests and then the police told us they had to burn everything Aiden was wearing that day.’”

So presumably, Aiden and his friends were seen on camera, as was Sergei Skripal and possibly Yulia, and this was on 4th March. We aren’t told when in the day this was, but given that the police traced the family, and Aiden then had to go to hospital, it clearly must have been after the police claim Mr Skripal came into contact with nerve agent on his door handle.

But here’s the significant fact (I am indebted to a lady who contacted me to point it out, and I must say I kicked myself for not having realised it before). Unlike the media outlets mentioned above, The Sun doesn’t mention the name of the park, but the piece is accompanied by four photographs of Aiden with his parents in the park where they saw the Skripals, and indeed one of them has the caption “Aiden with his parents by the pond where he spoke to Skripal”. Here is one of the pictures: 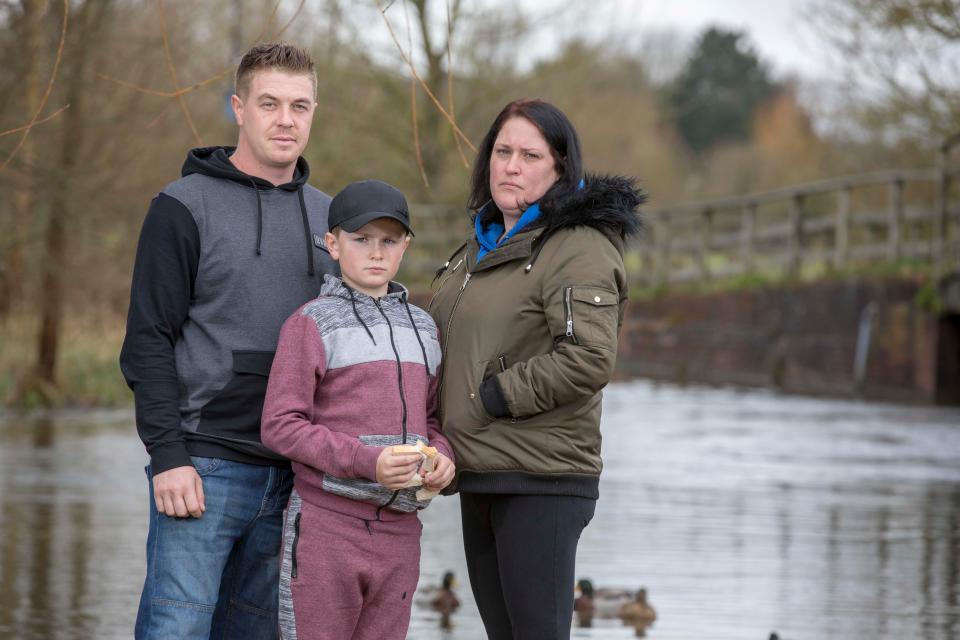 But do you know something? This isn’t the Avon Playground. It isn’t even the non-existent Riverside Park. Do you want to know where it is? It happens to be Queen Elizabeth Gardens.

Why is this important? As you are probably aware, Queen Elizabeth Gardens is now a focal point of Skripal 2.0, as it is alleged to be the place where Dawn Sturgess, who has now sadly passed away, picked up a syringe or a container with the toxic substance in. And whilst I’m not entirely sure whether the location of the duck incident being in Queen Elizabeth Gardens, rather than the Avon Playground, has any bearing in terms of the cases themselves, it does raise three huge questions:

Firstly, according to the Metropolitan Police timeline at the top of this piece, there is no mention of Mr Skripal and Yulia going to Queen Elizabeth Gardens. Why is this, since according to the parents of Aiden Cooper, the police knew that they had been there, having seen footage of them feeding the ducks with their son and his friends?

Secondly, if the police knew that Mr Skripal and Yulia had been in Queen Elizabeth Gardens, and that this was after they were poisoned (as they claim), why was Queen Elizabeth Gardens not closed off immediately and subject to a clean-up operation, as were other places in the City where the Skripals were known to have visited?

Thirdly, assuming the latest official narrative, did the failure to close off and clean up Queen Elizabeth Gardens back in March, when it was known the Skripals had been there, make it more or less likely that someone would come into contact with the alleged nerve agent container at some point?

These are serious questions. I think you’ll agree that they deserve serious answers.

One or two comments suggest that a map would be helpful. Again, I am indebted to the lady who pointed the Queen Elizabeth Gardens connection out to me, who has helpfully created a map with the main areas of interest (see below).

Can I just caution about one thing though. The point of my post was not to try and work out whether Queen Elizabeth Gardens is important as regards the original case. I think we could go down endless rabbit holes trying to work out where the Skripals went, when they went there, and what this might mean. Unfortunately, we simply do not know this, as there is too much information that we are not party to.

What I am trying to do at the moment is exploit holes in the official story (of which there are more than a few). The police have not included QEG in their timeline, and yet they apparently know that the Skripals were there that day. Why have they not included it? Why did they not close the Gardens down? And had they done so, could this have prevented others from coming into contact with the substance?

I am not saying that I necessarily think there was a substance there. There may or may not have been. However, the point is that the authorities are saying this and yet those same authorities apparently know that the Skripals were there on 4th March, but have hushed this up. Therefore, we need to turn up the volume on it and they need to explain themselves. 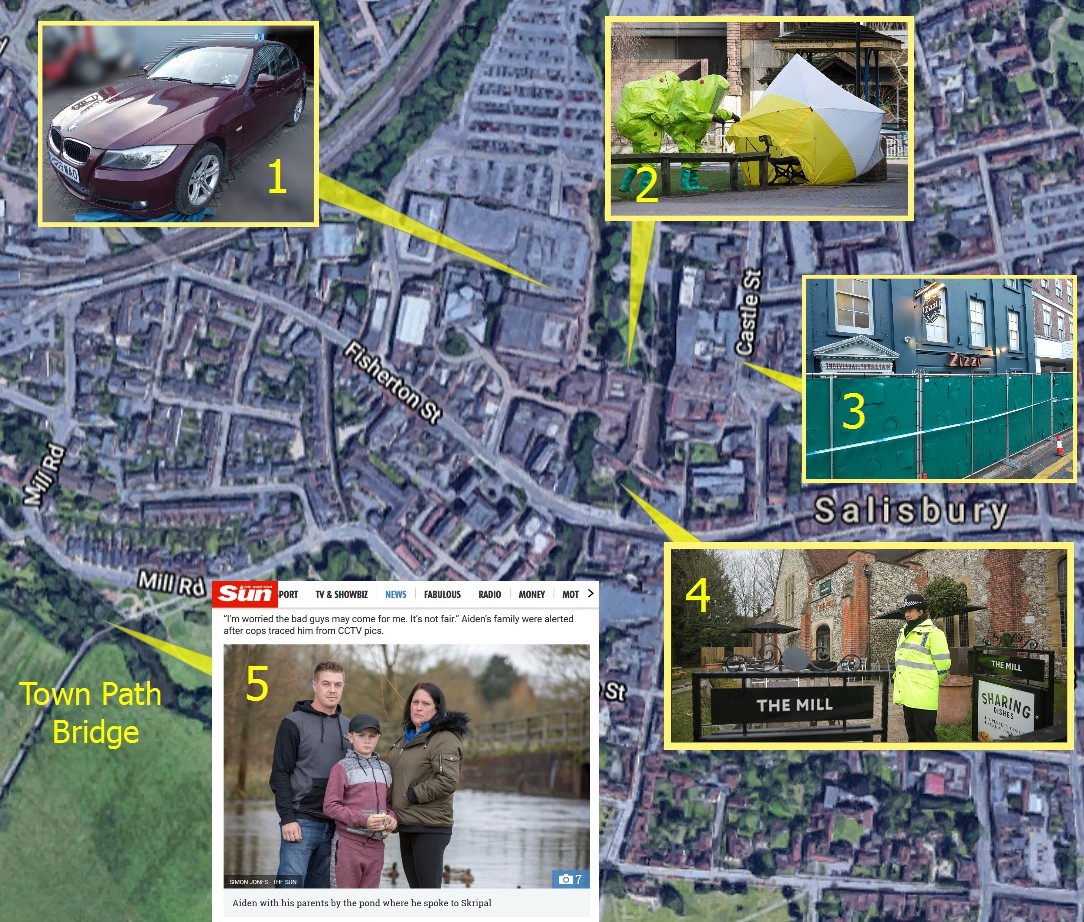