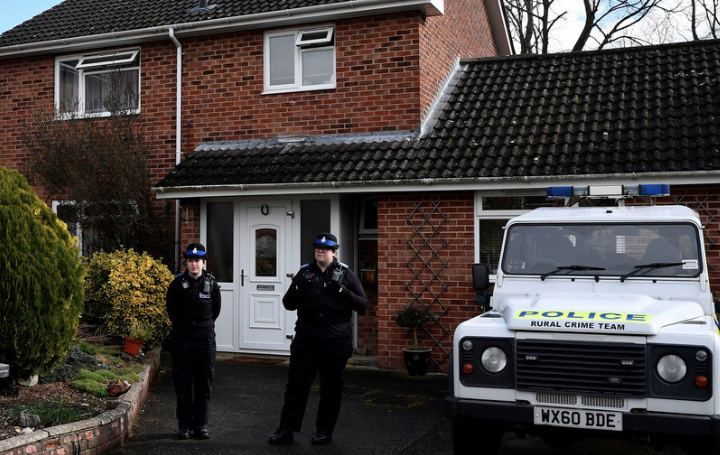 By TruePublica: In another twist from one of the most bizarre stories of recent times comes the news that the already beleaguered British taxpayer will now be footing the bill for buying Sergei Skripal’s house.

According to officials cited by The Sunday Times, taxpayers will be footing the bill for Skripal’s home, which is expected to be bought by the UK government for around £350,000. The Sunday Times also reported, that the taxpayer will pay for the home of Detective Sergeant Nick Bailey, who fell ill after coming into contact with the so-called nerve agent Novichok. That house is expected to cost taxpayers around £430,000. All in all, the purchase of both homes, cars, and other possessions, will amount to a hefty £1 million.

Asked why the state is buying both these properties and belongings, the Department for Environment, Food and Rural Affairs said it would be inappropriate to comment on the personal matters of anyone involved in the attack.

“Mr Skripal’s home is still the scene of an ongoing police investigation and has not yet been released for clean-up work,” a spokesman added.

Wiltshire Police told the Sunday Times it was a “personal matter”.

So, it’s all hush-hush then.

Earlier this month it was revealed the force’s overall cost, prior to house buying, will be in the order of £7.5million and the area’s police and crime commissioner Angus Macpherson has asked the Home Office to cover the bill.

In another report by the DailyStar – “A source said Sergei was in an MI5 safehouse and will be “under armed guard 24-hours a day for the foreseeable future”.

And yet The Times reported on April 8th that:

One wonders why the state is buying these two properties. One assumes they must be completely cleaned and safe by now even if they had been contaminated. And why not just board them up and leave them? There are plenty of empty homes across the UK. If not, how can the state declare that Salisbury itself is safe and ask members of the Royal family to visit the town if the authorities cannot contain a very confined space such as a house?

There are many confusing aspects to this story that continues to this day and the buying of Skripal’s house with no explanation or valid reason only adds to it.

As OffGuardian put it with regard to the event as it was unravelling back in March: “Even the numbers of casualties still can’t be agreed upon. The claim of “nearly 40” needing treatment that were made by Neil Basu, the national head of counterterrorism, and repeated in the Times and other outlets, were subsequently debunked by a senior physician at Salisbury hospital, who, in a letter to the Times, said unambiguously that only three people (presumably the two Skripals and Bailey) had ever needed treatment. A correction the Times itself published the same day.”

By April 20th, senior civil servants were distancing themselves from this story. Craig Murray, with connections in the Foreign and Commonwealth Office said: “FCO sources tell me it remains the case that senior civil servants in both the FCO and Home Office remain very sceptical of Russian guilt in the Skripal case.” Nothing actually really changed from that position even though mainstream media were having a festival of propaganda that was then to be subsequently silenced by the government as the story got more muddled and confusing and suspicions rose.

On April 22nd TruePublica was the only news outlet in Britain to report that a Novichok delivery system had been patented in the USA in April 2013. Why would anyone need to protect a patent design to deliver a deadly nerve agent that was supposedly illegal in the country that patented it – or any other country for that matter?

By April 30th the connection had been made about Pablo Millar. He was a colleague in both MI6 and then Orbis Intelligence with Christopher Steele, author of the fabrications of the Trump/Russia golden shower dossier, paid for by the Democrats in an attempt to tarnish Trump with a revelation that involved the Russians and prostitutes. In this case, British spooks were found to be making it up and the story was debunked within weeks.

As this news was about to become public the government sent out D-Notices banning all media mention of Pablo Miller making it more than probable that the government had something to hide and that the whole incident related to the Trump dossier puts Skripal in the frame for working on it.

By May 10th TruePublica reported that “a D-notice (Defence and Security Media Advisory Notice) used by the British state to censor the publication of potentially damaging news stories had been formally issued to the mainstream media to withhold publication of the British ex-spy deeply involved in the Skripal/Novichok affair.”

TruePublica then published the D-Notice.

The involvement of Skripal, a double agent himself, with MI5 and MI6 officers, who had in fact, been suspected more recently of being a triple-agent, with the connection of major political parties in the USA along with the hundreds of Russian agents exposed (many of whom were reported as being captured and murdered) by Skripal’s disclosures to foreign government’s for cash – made him a target of many actors. Skripal could well have a been a victim of an assassination attempt by an aggrieved Russian family but the story of the Russian state itself being involved simply does not stack up. This is especially so given that if the Russian state was involved – it would have succeeded in its mission and not bungled it quite so badly as it turned out.

We will probably never learn of the truth in this case. Skripal has gone. No-one can speak to him, his daughter or their families.

The entire affair is an embarrassing mess for the government, which stinks of collusion and cover-up, most of the damage being done by Boris Johnson’s ridiculous lies.