The Lessons of Sgt. Pepper’s 50 Years Later: Stop Fighting One Another and Focus on the Real 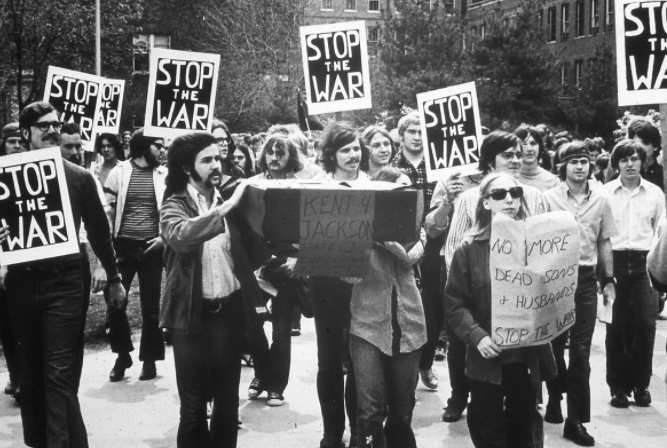 “Count me out if it’s for violence. Don’t expect me at barricades unless it is with flowers…. What’s the point of bombing Wall Street? If you want to change the system, it’s no good shooting people.”—John Lennon

The more things change, the more they stay the same.

In retrospect, perhaps the Sixties Generation and “1960s rock didn’t save the world—maybe didn’t even change the world enough,” but it was still a transformative time for those coming of age and trying to find their place in the world, and the Beatles played a large part in shaping that conversation.

Indeed, when Rolling Stone announced its top 500 pop music albums of all time several years ago, perched at the top of the heap was Sgt. Pepper, which Rolling Stone heralded as “the most important rock & roll album ever made, an unsurpassed adventure in concept, sound, sanguinity, cover art and studio technology by the greatest rock & roll group of all time.”

More than mere music, however, Sgt. Pepper’s “formally ushered in an unforgettable season of hope, upheaval and achievement: the late 1960s and, in particular, 1967’s Summer of Love.”

The events leading up to 1967 laid the groundwork for a social revolution powered by young people. With the young ripe for rebellion, drugs invading the country and altering people’s consciousness, and the drums of war providing a constant backbeat, it was only a matter of time before flower power and peace became the mantra of the Sixties’ generation.

University students and academics began believing that the Vietnam War was a direct result of the greed and lies of old men in suits and uniforms. The government—the “Establishment” that John Lennon would later refer to as “the monster”—had withheld the real story in order to do its dirty work. “I think we’re being run by maniacs for maniacal ends,” Lennon recognized.

All of these cultural streams converged in Sgt. Pepper’s Lonely Hearts Club Band, which was hailed as a major cultural event upon its release, simultaneously mirroring the angst of its age while offering a solution to the social and political upheavals of the day. The solution offered by the Beatles was a return to spirituality and love for our fellow human beings.

Sgt. Pepper’s was a declaration of change, both culturally and personally for a generation coming of age and for the Beatles, in particular.

Retreating into Abbey Road studios, the Beatles focused their efforts on creating a concept album that would showcase their artistry and vision, while allowing them to embark on a virtual tour with the album as the medium. Seven hundred recording hours later, Sgt. Pepper’s was born in all its psychedelic glory, the Beatles’ most audacious and inspired leap into the avant-garde: their self-presentation as fictional characters.

Sgt. Pepper transformed rock music from a musical diversion into an art form. At heart, Sgt. Pepper was a spiritual experience for an increasingly materialistic world. George Harrison’s “Within You, Without You,” the centerpiece of the album, is a warning not to get lost in materialism or we will lose our souls. The album’s final song, John Lennon’s “A Day in the Life,” points to the horrors of existence if humanity does not abstain from its destructive tendencies.

The Summer of Love followed in the wake of Sgt. Pepper’s release. Optimism filled the air, the almost tangible hope that peace would eventually prevail and the destructiveness of humanity would end. Armed with “flower power,” young people took to the streets and demonstrated en masse against the Vietnam War.

By 1968, however, the radiance of that golden age had already started to fade. Student rebels around the world adopted more militant tactics. Flower power was replaced by raised fists. Cultural heroes such as Martin Luther King Jr. and Bobby Kennedy were brutally assassinated. The Beatles too were disbanding.

By the end of 1968, it was clear that the Beatles were not going to save the world.

Yet the music of the Beatles remains with us as a poignant reminder that we all have a part to play in bringing about a world dedicated to peace and love. And the greater lesson of their music—that evil does not have to triumph and that good can prevail if only we can step beyond our self-interest—is one that we each must learn in our own time and in our own way.

First, as John Lennon cautioned, we have to stop playing the government’s games.

As I point out in my book Battlefield America: The War on the American People, all of the many complaints we have about government today—surveillance, militarism, corruption, harassment, SWAT team raids, political persecution, spying, overcriminalization, etc.—were present in Lennon’s day and formed the basis of his call for social justice, peace and a populist revolution.

The answer to oppression, injustice and tyranny is the same today as it was 50 years ago: if you want freedom, you have to begin by freeing your mind. That will mean rejecting violence, politics and anything that divides.

“You gotta remember, establishment, it’s just a name for evil. The monster doesn’t care whether it kills all the students or whether there’s a revolution. It’s not thinking logically, it’s out of control,” warned John Lennon. “When it gets down to having to use violence, then you are playing the system’s game. The establishment will irritate you – pull your beard, flick your face – to make you fight. Because once they’ve got you violent, then they know how to handle you. The only thing they don’t know how to handle is non-violence and humor.”