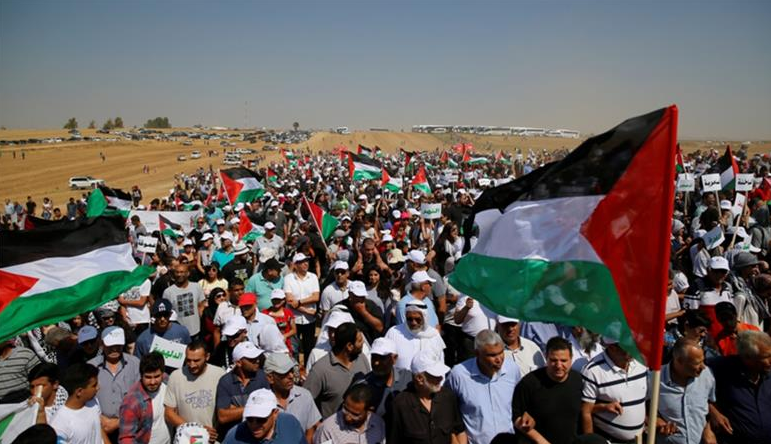 The March of Return is held each year to commemorate the 1948 Nakba. The annual “March of Return” by Palestinians in Israel, commemorating the Nakba – the expulsion of hundreds of thousands of Palestinians from their homes in 1948 – has been blocked by the Israeli police for the first time in its history.

The police have denied the organisers a permit, saying there is a shortage of officers to oversee the march.

But Palestinian leaders in Israel accuse the far-right government of Benjamin Netanyahu of being behind the decision, in what they believe is the latest move to silence their commemoration of the events of 69 years ago.

The Nakba – Arabic for “catastrophe” – refers to Israel’s creation on the ruins of the Palestinians’ homeland in 1948. Some 750,000 Palestinians were expelled outside the new state of Israel’s borders, and more than 500 villages razed to prevent the refugees from returning.

The march has rapidly grown in size over the past few years, in defiance of increasingly repressive measures from the Israeli authorities.

It is now the largest commemorative event staged by Israel’s 1.7 million Palestinian citizens, one in five of the Israeli population. They are the descendants of the small number of Palestinians who managed to avoid expulsion, although many were internally displaced by the Nakba.

Organisers had expected some 25,000 people to attend this year’s rally at a destroyed village in the Galilee.

Adalah, a legal centre for Palestinians in Israel, has written to Israel’s chief law officer, threatening to appeal against the decision to the Supreme Court unless it is reversed.

If no permit is forthcoming, it will be the first time the March of Return has not taken place since the event was established nearly 20 years ago.

“This is clearly a political decision. The government is trying to push a new generation of Palestinian youth in Israel into the corner, to intimidate and silence them,” Yousef Jabareen, a Palestinian member of the Israeli parliament, told Al Jazeera.

“The [Israeli] government expects young Palestinians to forget their identity, their history and their connection to the lands their grandparents were expelled from. But the fact that the march grows from year to year shows that they have not forgotten. And that is what really angers the right wing in Israel.”

Refusal to be ‘good Arab’

The March of Return, noted Jabareen, had gained great symbolic weight for other Palestinians as a result. It offers a chance for elderly refugees to return to their villages, often bringing with them iron keys to homes that no longer exist.

In previous years, marchers held aloft signs calling for the right of millions of refugees dispersed across the region to return. The event’s main slogan is: “Israel’s Independence Day is our Nakba”.

Ilan Pappe, an Israeli historian and expert on the Nakba, told Al Jazeera: “Palestinians have mobilised in large numbers for the march in part because of the growing use of the internet and social media.”

He added: “At the march, they can carry the Palestinian flag and express their collective identity as a national minority. The government sees that as a refusal to succumb to the model of the ‘good Arab’.”

This year the march was due to be held near the ruins of Kabri, a destroyed village northeast of the coastal city of Acre in the Galilee. Kabri was destroyed days after Israel declared statehood on May 15, 1948, and almost all of the villagers expelled to Lebanon.

Organisers had hoped to bring an 86-year-old survivor of the expulsion who now lives in Acre.

Mohammed Bassem, an Adalah lawyer, told Al Jazeera that the organisers had promised to provide 300 stewards to oversee the march, leaving the Israeli police only to manage traffic on access roads. “In these circumstances, it is difficult to see how the event will put a strain on police resources,” he said.

However, several Jewish communities, located on the village’s lands, have publicly opposed the march. They say it would be an insult to the memory of several dozen Jews killed in the area during the 1948 war.

Yoram Yisraeli, head of the local regional council, issued a statement to the Israeli media, saying of the march: “It will not happen … I will not give my hand to the rally. Let the organisers pick a suitable [different] place to mark the Nakba”.

Pappe said the police had begun imposing increasingly severe restrictions on the march last year and would have found a pretext to deny a permit this year, whatever location had been chosen.

“The march has always been peaceful. But the police and Israel’s political elite read any commemoration of the Nakba as equivalent to an act of terror. Any demonstration is seen as a threat, as the start of the next Intifada,” he said in reference to two major uprisings by Palestinians in the occupied territories.

The police decision follows years of mounting opposition from the Netanyahu government towards any commemoration of the Nakba. In 2011, it passed the so-called Nakba Law, which allows officials to financially penalise any public institution, including schools and civil society organisations, that mark the events of 1948.

The culture minister, Miri Regev, has regularly threatened to withdraw funding from any cultural venues, including theatres and cinemas, that host Nakba-related events.

Jabareen noted that Regev is preparing to introduce a “Cultural Loyalty” bill in the next few weeks to strengthen her powers to defund such institutions.

Israeli universities have denied permits to Nakba commemorations on campus and suspended students who hold such events.

And the Israeli state archive has recently buried away large numbers of documents from 1948 that had been previously made available to researchers.

“There is a clear trend towards greater restrictions since the Nakba Law,” said Pappe.

Although Palestinians commemorate Nakba Day on May 15, the day in 1948 that Israel declared statehood, the March of Return is held on the anniversary according to the Hebrew calendar. This year it takes place on May 2.

Police have told the organisers that they cannot cope with this year’s march because they will be too busy with Independence Day celebrations held by Israel Jews.

Micky Rosenfeld, a police spokesman, told Al Jazeera: “We have a lot of requests for gatherings and marches on Independence Day and we have to weigh how we can best use our limited resources.”

According to Adalah, the police have proposed that the march take place on a different date. Mohammed Kayal, a board member of the Association for the Defence of the Rights of the Internally Displaced (ADRID), which organises the March of Return, said the police were not acting in good faith.

“We have held the march for 20 years and nothing is different this year,” he told Al Jazeera.

He noted that Independence Day is a national holiday in Israel, giving most Palestinian citizens an opportunity to participate. “Any other day won’t work,” he said.

He added that there were other reasons it was important to stage the event on Israel’s Independence Day. “We have a duty to remind the Israeli public that what they consider to be their independence came at a terrible price,” he said. “Millions of Palestinians continue to suffer because of those events and are denied the right to return to their lands.”

According to estimates by ADRID, as many as one in five Palestinian citizens of Israel are descended from those forced out of their villages in 1948 by the Israeli army and internally displaced. Millions more Palestinian refugees and their descendants languish outside Israel’s borders, in camps across the region.

Israel permanently stripped all refugees, including its Palestinian citizens, of the right to reclaim their property under the 1950 Absentee Property Law, said Suhad Bishara, another Adalah lawyer.

Kayal rejected additional claims that the march might lead to clashes between Palestinian participants and Jews celebrating Independence Day.

“The march has passed off peacefully for many years, and there is no reason it won’t do so this year, too,” he said. “Our selected route is not close to the Jewish population and it should not cause friction.”