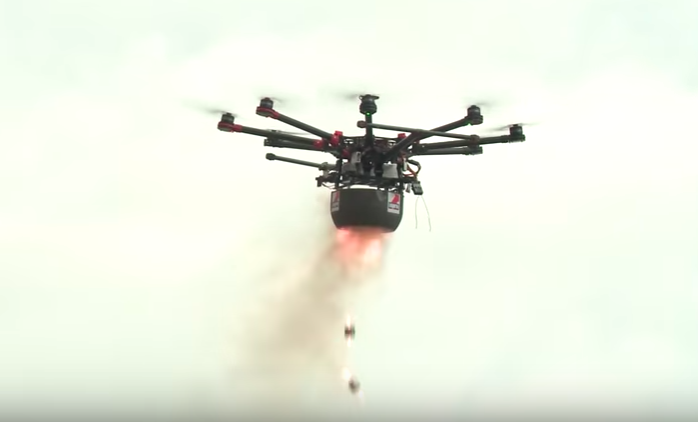 Via ZeroHedge: For the first time, Lebanon-based Al-Mayadeen TV released new dramatic footage showing Israeli forces using a weaponized unmanned aerial vehicle (UAV) against a Hamas rally in the Gaza Strip, according to the Times of Israel.

The UAV is seen flying through the skies above hundreds of protestors, while operators of the aircraft drop chemical weapons into the crowd.

The Times of Israel states that the UAV released tear gas, formally known as a lachrymator agent, which causes severe eye and respiratory pain, skin inflammation, bleeding, and even blindness.

“Beyond the fact that this equipment neutralizes any danger to the troops, it enables reaching places that until now we could not get to,” Shabtai told Hadashot TV news.

The weaponized unmanned aerial vehicle (UAV) “can carry up to six canisters at a time, and drop them individually, as clusters, or all at the same time,” said the Times of Israel.

The Israeli-based online newspaper did not provide the manufacture’s name of the UAV, but it is rumored that ISPRA Ltd in Herzelya, Israel, is the developer of the drone, dubbed Cyclone Riot Control Drone System.

ISPRA’s Anti Riot Drone provides law enforcement units with an extremely large range mode of work, enabling them to react against rioters and demonstrators at an early stage of the event, at a distance while avoiding direct confrontation with rioters. This unique and innovative solution, developed by Ispra, allows law enforcement units to react when a barrier or obstacle is separating between the parties. With several drones, a continuous presence over the rioters can be maintained, dispersing non-lethal ammunition and providing commanders with real-time video image of the situation on the ground.

Developers of ISPRA present a short informational video of how the chemical weapon drone works.

The Times of Israel adds that Israeli officials are preparing for months of border protests, which will lead to a large demonstration on May 15. According to an Israeli TV report, Hamas, a Palestinian Sunni-Islamic fundamentalist organization, has budgeted $10 million to fund the upcoming protests.

“We want to frighten the Israelis with the images of massive crowds of people who peaceably gather and sit close to the border,” Hamas spokesman Ahmed Abu Retaima recently told Bloomberg.

Retaima added, “We are working to bring out more than 100,000 people for the march.”

Meanwhile, Sputnik news agency states that Israel did not sign the Chemical Weapons Convention of 1993, which enables the Israel Defense Forces (IDF) to legally deploy chemical weapons such as tear gas against civilians.