Postcards from the Economic Edge – Postcard 6 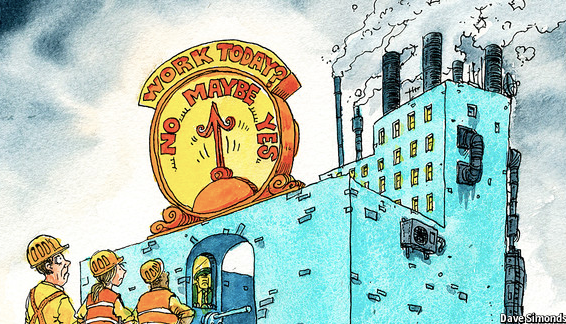 Who Pays in a Financialised World?

Worst week yet. Hours have been cut again as orders have not picked up. An experienced colleague informs me that orders for Wednesday were fifty-five percent down on the same day last year. Each day brings more of the same with an unmotivated, resentful workforce which feels its sacrifices (exploitation) are merely being used to protect the management from the results of their lack of vision.

With Christmas only four weeks away, people are worried about how they will manage over this very expensive holiday period. Two weeks ago, the head of the Europe Division in charge of sales resigned ostensibly to ‘spend more time with the family’ much like a politician caught having an affair, totally missing the point that s/he was having an affair to avoid having to spend more time with the family.

This is the last postcard as most of the salient points relating to the conditions millions of our fellow citizens live and work under have been made.

However, one final area which is generally ignored when dealing with ‘Serfer’ or gig economy needs a look – the physical and mental health price being paid by the three-and-half-million ‘outsourced’ workers (the corporate scam to pay one set of workers worse or no holiday, sick pay and pension rights than their colleagues employed directly by the same company) and ask who ultimately pays the price of it.

Let’s talk about ‘Mick’ (not his real name) who has been one of my colleagues over the last six weeks. Mick is an ex-squaddie who has seen it all in Iraq and Afghanistan and now sees it all in the country he fought for. He deals with it all with a mixture of resignation and black humour which he needs because he has a young son with cancer. In the six weeks he has been off work for two weeks without pay for health reasons. Although he is a quiet man, I have got to know him reasonably well and it is quite clear that he is buckling under the pressures of work, lack of money and family. Last week, I found him asleep for a few minutes holding onto the boxes we put out for support. We both laughed when he woke to see me and winked our shared mockery of our employers.

So, who will pay for what is happening to Mick?

Not the company or the agency.

It is all those like Mick put under the immense pressure of working in these environments who initially pay the price in terms of ill-health, family breakdown, emotional trauma and financial hardship. They are the first payers. *

Besides Mick, who again picks up the tab?

Not the company or the agency or the politicians who support these policies but the greater society which is the second payer. Ill-health and emotional trauma imposes additional pressures on the NHS, family breakdown on the welfare state, and financial hardship on society.

That is enough, is it not?

There is a third payer who has no voice, and therefore, never seems to be part of this equation because it cannot speak for itself; our ecosystem.

Everyone pays except those most culpable for this state-of-affairs.

What it all tells us is that our current economic, social, political and environmental model is unsustainable. Either we change it for the better or it will collapse in a heap of ashes – of peoples lives, society and our planet.

The choice – that appears to have been taken away from Mick and us all – is ours.

* More than a third of the UK workforce is experiencing anxiety, depression, or stress, according to a survey of employees in junior and senior roles published by management consultancy firm PwC (2017). Of 2,000 workers who responded, 34 per cent said they had a health and wellbeing problem.