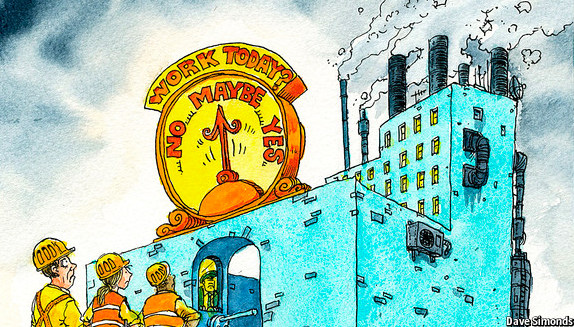 Not a good week. Customer orders are down and not running at projected pre-Xmas levels. We were sent home (without pay) one hour early on three days. We were lucky. Some of our female colleagues working at a different job in the same section lost somewhere between eight to twelve hours, thus ensuring their wage would be under £150 for the week. * One female colleague has a young family and is worried about the loss of money, but she will be subsidised by the government and her second part-time job. Was the social welfare net (ever shrinking) designed to help the disadvantaged in our society or act as a subsidy for companies not paying a decent wage?

We decide we are a new type of serf – the Serfer – people who work for basic pay and conditions but, unlike serfs in the Middle Ages, in 21stC Britain we move at a time and place of the agency’s choosing.

An economist who is glitterati of the Twitterati recently pointed out that many businesses today, who he described as “zombie” companies, would in normal circumstances have gone under but now manage to carry on. He wanted to know ‘why?’ We, at CAP, pointed out to him that in the corporatized, neoliberal age the illusion that everything is bright, shiny and always successful must be maintained regardless of reality or the whole rotten edifice would collapse.

The company I am ‘serfing’ at provides a good example of this. And shows ‘how’ they do it.

First the bottom line. Its sales today in terms of revenue are virtually the same as fifteen years ago. That suggests that they have maintained their market share. Wrong. Just taking inflation into account, their revenue is down 30% over this period, a figure mirrored exactly in sales this year alone. Is there any mention of this in their annual reports? No. The AR is full of positive words of success.

Reality on the factory floor is very different.

The history of the company goes back many decades. When it began in the USA, its innovative range of products, pricing, quality and unique sales methods made it a byword for success. That success was further enhanced by a corporate culture that viewed its employees as partners and they were paid and treated in that manner.

As these aspects of its business have gone and sales have declined, it has maintained its illusion of success by gouging its workers’ wages (an agency worker earns c40%+ less than an employee while additionally the company has no responsibility for NI and pension and agency workers now represent over 80% of new workers), lack of capital expenditure (the factory is working on a system and machinery that was originally employed over forty years ago), taking advantage of tax avoidance schemes (setting up a Polish offshoot which orders products from India is just one example), cheap money from banks and mitigating quality to bolster its bottom line.

Yet the real bottom line is inarguable. A company struggling with an out-of-date business model, a management lacking vision and courage to apply drastic surgery, a need to get back its ethos, promote affordable quality as its core value while transferring towards a business model that builds on its existing structures and supply chains but moves them into 21stC and the age of Amazon, eBay and the internet.

Will this happen? Unlikely.

Middle and lower management lack any semblance of skills when we very occasionally see them (in fact some appear unable to read out a simple company memo without difficulty and use corporate speak to say nothing) and are content to trundle on knowing that they will receive a good pension on retirement. Senior management based on the evidence of last fifteen years alone lack vision and are locked in a ‘conspiracy of success’, that is, everyone senior toes the line that the company’s business model is working.

So, the daily losers of this slowly dying company are the workers and not the management. The workers are literally paying for the company’s presented success. It is business but not as we used to know it. **

It is an apt symbol of where we are today in the UK. A country where wages have declined by over 10% since 2010 while a political system in the pocket of the rich and corporates congratulates itself for running the economy competently.

Failure is the new success. And the price is being paid by those least able to afford it. Ordinary people and civic society.

* We are texted our hours for the coming week on Friday, but these can change at the discretion of the company / agency daily.

** While there is widespread criticism of the company amongst all its workers, the greatest loathing is reserved for the agency as a parasite that creates nothing, adds nothing to the economy, while feasting on the labour of others.