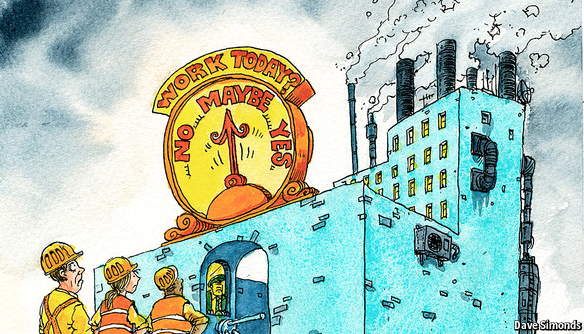 “Wages are lower now in real terms than they were in 2007, after the slowest decade of wage growth in Britain in over two hundred years.” Ian Blackford, SNP Westminster Leader (Fact-checked HERE)

“The UK has suffered the biggest drop in average real wages of any OECD country except depression-wracked Greece, according to analysis published by the London School of Economics.” (Report)

As the UK’s Office Of National Statistics announced over 1 million workers in the UK who were working to zero hours contracts, the New Zealand government banned their use after political parties across the board supported the ban last year.

According to the chief economist of the Bank of England, Andy Haldane, the emergence of the so-called gig economy, now looks quite a lot more like pre-Industrial Britain than the tech paradise glorified by the likes of Amazon, Uber and what is now an underlying feature of some of the world’s largest corporations as worker exploitation goes into overdrive.

Frank Field MP’s recent report demanded ‘emergency government intervention’ to protect self-employed workers from exploitation, which will undoubtedly fall upon deaf ears. With the modern gig-economy came an entirely new classification of terms to represent economically overburdened workers such as; “JAM’s” (Just About Managing), “poverty pay” and ‘in-work poverty.” As if further proof were needed new research finds that a record 60% of British people in poverty live in a household where someone is in work.

A founding member of the rapidly emerging Civic Alliance Party decided to personally the test veracity of the statements made above and create a blog post of experiences as seen through the eyes of an average worker in Britain’s expanding exploitation economy or ‘gig-economy’.

Postcards from the Economic Edge – 2:

I am left in a small office to read more notes about Health and Safety.

The workers are reasonably friendly and the fellow Brits welcoming and warm and the non-Brits more reserved.

The on-job training lasts five days but has no structure and it’s only training in the sense someone is overseeing so you are working from the first minute. Management is most conspicuous by its absence.

I am lucky. I have been given regular hours. I work eight or nine-hour shifts, Monday to Friday. I have even worked a Saturday. Others who signed up with agency work, when they can, often do twelve-hour shifts, sometimes at different factories in the same week. Problem is that they really do not know how much work they will have week-to-week.

After a few days, I try to find out what the worker breakdown is between British and ‘Foreign’ workers. It appears, although managers are cagey about it, that as many as 80% of agency staff are ‘foreigners’ namely from the Baltic States, Poland, Romania, Czech Republic, Albania etc. The ‘Brits’ make up the rest.

Roughly, the reverse applies to full-time company staff who make up a smaller number of the overall workforce. Around 80% are Brits and 20% are East Europeans. Many of these workers have been at the company for fifteen years or longer.  Demographics show that most British company workers are middle-aged. Most agency workers are young (under 30).

It doesn’t take long to find out the economic effect this has had on our fellow citizens.

For the first time, I hear a phrase that I will hear repeated many times by long-serving staff who split the company into ‘Old’ and ‘New.’ The ‘Old’ company disappeared fifteen years ago with the influx of workers from the Baltic States and the ‘New’ company way of working began. And their relationship with the company changed for ever.

A fellow Brit who has been working for the company for twenty years tells me that he now gets £1370 per month after tax for the same job. Twenty years ago, he was earning £1500 per month. Taking inflation into account, Bank of England calculates the figure, if it had kept up, should be £2,505.31.  So, his wage has not just seen a decline in inflationary terms but in the actual amount since 1997. I ask him why he stays. He looks at me as if I am alien from Mars. ‘Mate, this is better than most of the shit out there. At least I’ve got a job. I don’t know how you’re doing this agency shit. You get f**k all.’*

The sad thing, because it is true, is that he is right.

So, who wins from this neoliberal economic equation?

Who is our government responsible for if it’s not our people?

Which British family can live on that kind of wage even if it’s outside London?

Next – What Workers Really Think

* Agency workers get around £880 pm for a five-day, 8-9-hour shift. You are not paid for your breaks – 40 minutes per day. Many East Europeans do overtime (Brits rarely do) and not because they work harder or better but because they have another agenda. They look to clear c£1000pm. In Romania, they would earn £300 pm for same work, in Albania something a little lower, £350 in Poland and c£500 in the Baltic States.

Hourly wage for non-permanent staff 15 years ago was £6, today it is £7.71. Taking inflation into account, Bank of England calculates the figure (if it had kept up) should be £8.96.