The UK Pensions Crisis – From Prophesy To Reality 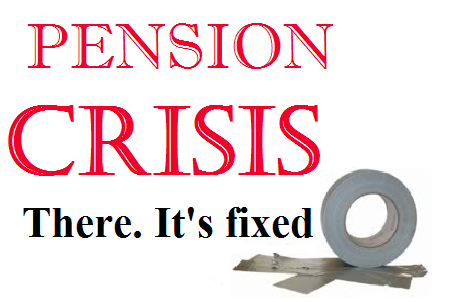 By Graham Vanbergen: Can you guess who recently said this? – “Oh, by the way, we’re also going to tax you even more because this Ponzi scheme that we’ve had in play for pensions and for healthcare and for social care for the past 30 years is about to collapse. So therefore we want you to work really, really hard, but when you get to 65, it’s not going to be there. Hands up who thinks that’s a really compelling narrative?”

It was Conservative Justice Minister Dr Phillip Lee who became yet another top Tory to have a go his own party as the annual Conservative conference descended into chaos this year. Lee was speaking at a meeting chaired by the Social Market Foundation, a pro-market think tank!

Lee is not wrong, when it comes to pensions. Since the financial collapse, caused by the banking industry, the pension deficit in the UK has now reached the point, for the first time in history, where it has become the biggest liability to the overall economy.

The decision to cut interest rates last August to their lowest ever is only an admission by the Bank of England that the country is still on a full artificial life support system.

HSBC’s head of European credit strategy Jamie Stuttard warned a year ago that Governor Mark Carney’s monetary policy move means: “The pension issue is essentially kicked down the road for somebody else to sort out.”

If you have a pension and you’re still quite a few years from claiming it, you should be really worried. It is not an exaggeration to suggest that there is a very real threat to collecting that pension in any meaningful way. What then? The pension deficit is so serious that it has literally mutated from being nothing one year prior to the financial crisis to Britain’s biggest liability just a decade later.

The pension deficit has sprinted way passed the £430 billion mark, increasing at the rate of at least £40 billion a year and according to the Financial Times (paywall) “more than 85% of UK pension schemes are now in deficit.” In less than ten years, that deficit will climb to the point of implosion.

Taxpayers attending to banks with a decade of emergency CPR. The red box in this image, is from the treasury which was on the hook for over £1 trillion in 2008, but taxpayers continue to administer more life support into the ‘financial services’ industry with a mere £450 billion to date to assist them with their ‘challenge’ – ironically, just about enough to have solved the entire pensions crisis and millions facing destitution at retirement.

What happened was easy to understand. The banks blew up the system, the country is actually in recession, even though they say it isn’t, which is why it needs almost zero percent interest rates and hundreds of billions of funding in order to get the banks to lend, so they can make money and strengthen their destroyed balance sheets.

In the meantime, pension providers are unable to get returns on the money invested in them, who in reality need at least 5 or 6 percent just to tread water. The only way to get that type of return is to turn up the risk strategy. UK government gilts are providing no return as many have lost faith in the banks, which in turn drives down the rate of return, making matters even worse for the pension providers.

According to a wikipedia entry on the pensions crisis – “Thousands of private funds have already been wound up (in the UK)”.

Add all the investing problems along with a decade of low interest rates to the fact that the pensioners themselves refuse to die at a financially convenient date for the pension providers – and there’s the catch 22 – and you’re in it. But the Bank of England chief Mark Carney is digging UK pensions deeper into a hole.  With loose monetary policy, Carney is currently acting in the hope of staving off an economic crash in the short term. In reality, all he is doing – as mentioned, is effectively kicking the can down the road for others to collect. All the while, the pensions crisis is getting worse every day and when that deficit is declared un-payable, which it technically is already, the ‘haircuts’ everyone will be taking will cause one almighty recession in its own right. By then, he’ll be back in Canada, shielded from the economic firestorm.

The only options with a crisis like is A) all affected pension schemes offer big reductions to rebalance their liabilities, B) the government borrows massive sums of money to shore up those liabilities, hugely increasing the national debt C) the pension companies offer a one-time payoff or buyout to scheme members that cuts their long term liabilities, or D) they collapse.

The most likely option you’ll be facing is option A or C as the government simply won’t have the money to bail out pensions after bailing out the banks, which they are still doing and D would cause mass protests or possibly worse.

Of course, the entire country could take the pain, allow artificially low interest rates to increase, which will save the pension companies. Then the scale of ‘zombie’ companies who go bust will become apparent, the stock market will fall, investor dividends will dry up, unemployment will rise causing a risky rise in ‘non-performing’ bank debt. It’s a tightrope as you can see.

Eoin Murray, head of investment at Hermes Investment Management agrees. “QE and ultra-low rates have insulated many companies, and unwary investors, from the dangers that normally lurk; they are now treading a dangerous path. As interest rates begin to meaningfully rise, companies that have been able to borrow cheaply and roll over debt will be exposed. These are the zombie firms that in a normal rate cycle would no longer exist.” Murray went further with a dark warning for investors: “That would mean inefficient companies going bust, but investors also stand to share the pain. Back in 2009 only 2pc of loans issued were “cov-lite”, those which placed few restrictions on a company’s debts and so offered little protection for the investors buying those bonds. By 2013 that was 59pc and last year it hit 75pc, this means the debt markets could be a “powder keg”.

The cost of living and low wage performance has also stopped millions from contributing to pensions, which again, only makes matters worse. This is because ordinary people are already suffering today, let alone being able to invest in their future. One in four households (not individuals, entire households) have less than £95 saved. The savings gap between the wealthy and poor has widened by a huge 25 percent in just the last year. The IMF says this is because average household income is now falling faster than at any time in the last 40 years and according to the ONS is a record since records began back in the 1963.

The result of all this is that one in five have made no pension provision and many millions are facing big future cuts in pension payments or a total wipeout. The other alternative would be to bring in lots of young foreign labour but we have Brexit, and anyway, the new robotics revolution in our factories will only decrease the number of working age people able to contribute.

This problem will have very real consequences for the country and its people quite soon and the Bank of England is fanning the flames of an economic problem set to explode in our faces. Cowardly politicians unable to start the debate on what to do for fear of losing power in the resultant social scandal that should have been dealt with years ago do not help of course.