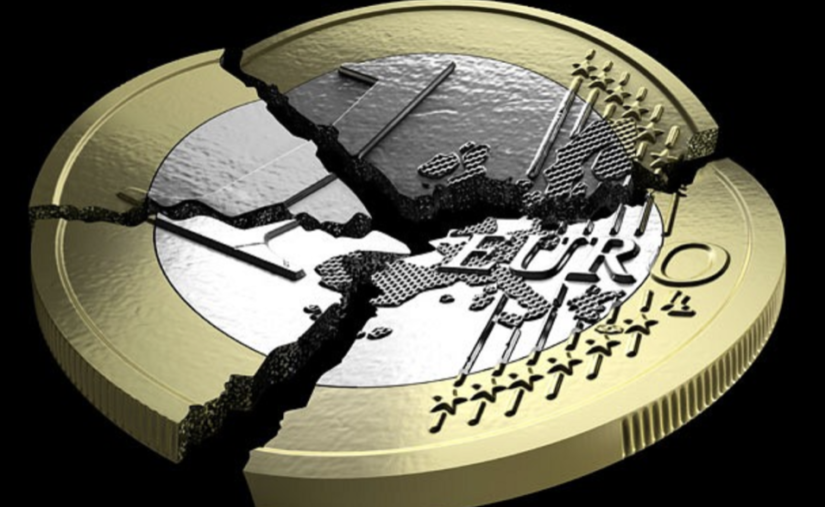 By TruePublica: There is much speculation across the EU at the moment that the euro currency is in very serious trouble. It isn’t the first time, but the COVID-19 crisis has put an entirely new threat into the system that makes its future look less certain. We have always speculated at TruePublica that because of the euro, there was a good chance of the region fracturing into two or possibly even three regions.

The euro-region economy is set to shrink 7.7% this year, sending unemployment and public debt levels surging, after governments put in place drastic measures to limit the spread of the coronavirus, the European Commission said Wednesday (6th May).

Officials warned that the crisis risks widening the gulf between northern and southern euro nations and pushing the bloc to breaking point because of differing exposures to the tourism industry and governments’ capacity to support businesses and households.

Overall output in Greece, Italy and Spain, where debt levels were already higher than average before the crisis hit is projected to fall by more than 9% this year. It will be less than 7% in countries including Germany and the Netherlands. Without some form of common rescue plan, distortions could put the very stability of the region at risk, the EU said.

“Such divergence poses a threat to the single market and the euro area, yet it can be mitigated through decisive, joint European action,” Economy and Financial Affairs Commissioner Paolo Gentiloni said in a statement.

The forecast underscores how drastically officials had to revise the outlook following crippling shutdowns to limit the spread of the coronavirus. Just three months ago, the commission predicted euro-area growth of 1.2% this year, though it singled out the illness as a “key downside risk” at the time.

The latest projection, which is broadly in line with recent IMF numbers is still subject to a high level of uncertainty and the risk of an even deeper slump is “very real,” according to Maarten Verwey, the commission’s chief economist.

Another surge of infections could reduce output by another 3 percentage points, he said. The European Central Bank previously said that the euro-area economy could shrink by as much as 12% year, depending on how the outbreak develops.

EU governments have deployed trillions of euros in stimulus to keep businesses afloat and contain a rise in unemployment. The response has however been uneven across the bloc and talks about a joint approach are mired in conflict over the extent to which states should share the burden.

On the 8th April, fractures in EU negotiators outcome was evident. Emergency all-night EU talks broke up without a deal amid splits over conditions on financial aid – and that reality still stands today.

Bloomberg reports that – “Leaders have asked the commission to present a recovery plan that builds on the bloc’s common budget as a way of funding an economic recovery. Countries are split on whether aid should take the form of grants or loans, with Italy and Spain arguing for European solidarity. Germany and the Netherlands have led opposition to joint debt.

The danger of relying largely on the ECB for a common response was put on display on Tuesday, when Germany’s constitutional court issued a surprisingly critical decision on one of the institution’s older asset-purchase programs.

Economists expect the institution to top up emergency asset purchases in the coming months amid the gloomy economic prospects. Inflation in the 19-nation bloc will slow to just 0.2% this year, the EU predicts.

Having been on a declining trend since its peak in 2014, the euro area’s debt as a share of economic output is projected to reverse this year and widen to more than 100%. Greece, the euro area country worst hit by the previous crisis, will see its debt-to-GDP ratio spike to 196.4% this year, the highest across the bloc, while Italy’s is seen at close to 160%.”

The other problem is that individual countries within the EU have different plans for the lockdown and exiting it – meaning some would be more affected than others.

There appears to be too much optimism as the EU forecast sees the euro area rebounding by 6.3 per cent next year from its low point due sometime this year as a result of the virus. Even if growth rises by 5 per cent (IMF forecast 4.7 per cent), the Eurozone area will have flatlined or remain in recession.