Evidence That The European Union Is Falling Apart Right Now 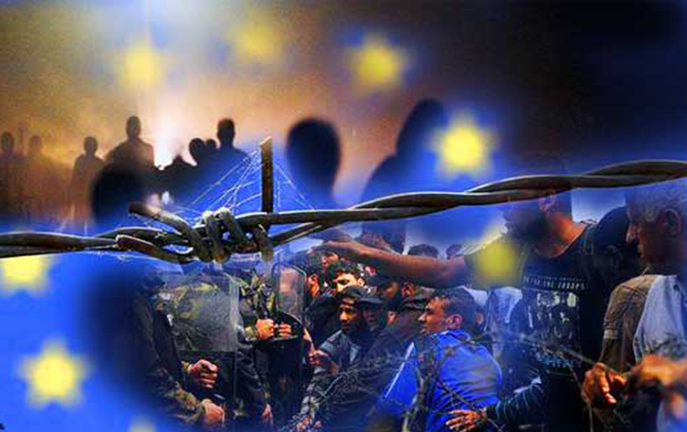 By Graham Vanbergen: France’s far-right leader Marine LePen who recently lost to corporate stooge Emmanuelle Macron called the United Kingdom’s vote to leave the European Union “the biggest political event in Europe since the fall of the Berlin Wall.” Could she be right? Was Brexit the first of the foundational stones to start the structural damage that eventually causes the entire building to fall down?

With Britain’s upcoming June 8th election, Theresa May will, by all accounts be emboldened by an increased majority in Parliament and go for a hard Brexit. By voting for the Conservatives the British people are implicitly voting to exit the single market.

In recent weeks though, the EU’s newest members turn out to be the fiercest opponents of the EU’s single market. And let’s be fair, the single market is THE definition of the European Union – that is to say, the free movement of people, goods, services and capital.

Hungary and Poland are transitioning toward some form of authoritarianism without as much as a whimper from the media. In both countries, elected parliamentary majorities have almost universally colonised the entire public sector.

The reason – they want to take back control. They have a grievance with the power elite within the EU. And as with so many of the really big confrontations in Brussels, it centres on farmers and food. But it’s not just Hungary and Poland.

From Politico.eu: “Central Europeans say big Western European landowners and multinational supermarkets are wiping out their farmers and shopkeepers. Protecting smallholders from powerful investors like banks has leapt to the top of the political agenda. Eastern European governments have rolled out a complex web of new laws to stop foreigners buying out swaths of ultra-cheap farmland.”

The EU Commission thinks it knows best and will not tolerate member states threatening the central column of EU policy. Some EU members and are now striking back.

Bulgaria, for instance, legislated that investors should be resident for more than five years before they can buy farmland. The EU response was to issue an infringement notice. In Romania, Brussels objected this year to rules that supermarkets should source 51 percent of fresh produce from local suppliers. There has been no decision on either case but you can see what these countries are saying; they do not want foreign billionaires and hedge funds owning land and killing off local farming, shops, businesses and their communities.

Politico captures sentiment in the Eastern European region by saying: “It is in Poland, the regional heavyweight, that the battle over respect for the single market is fought the hardest. Brussels already ordered the authorities to halt a tax on the retail sector on the grounds it grants a selective advantage to small, local shops with a low turnover over big foreign-owned supermarkets. All eyes are now focusing on how the European Commission will react to a growing chorus of complaints in Poland over the rights of foreigners to buy farmland.”

But it doesn’t stop there. Bulgaria, Latvia, Lithuania and Slovakia have all taken similar action and the EU Commission has responded in much the same way by delivering more infringement notices. Eastern European leaders are banding together to forge an alliance against what they see is a European Union with too much power over domestic politics.

Strategic Forecasting predicts that the European Union will not so much collapse but splinter into four distinct groups; Western Europe, Eastern Europe, Scandinavia, and the British islands as relations break down and they become increasingly estranged from each other. And you can see from the fractious and confrontational handling of these problems by the EU how this is already coming true.

Heading south we see in Greece that violence has arrived yet again to the streets of Athens. Protestors tried to storm parliament hurling Molotov cocktails. Police responded with tear gas as yet more taxes are increased and pension entitlements are cut amidst an overall unemployment rate that is on the approach to one quarter of the entire adult population. The Greek debt crisis has seen a tragic spike in suicide rates, infant death and mental illness.

The Italian banking crisis that started right at the beginning of 2017, will unfold over the year and have a range of consequences, not least, because it will force a confrontation between Italy, Germany, and the European Union. Germany, which sees itself as de facto leader of the EU, is the main force behind the ECB’s opposition to bailouts and Italy is going to need a lot of bailing out one way or the other. But big Italy is not tiny Greece, the consequences of one foot wrong here will be catastrophic for the EU.

In the meantime, France effectively kicked out the EU obedient establishment two-party system and voted in a banker with no political experience. France has seen a complete highjacking of its political system thanks to corporate interests, who has just handed all sovereignty to Brussels to further advance the federalisation of Europe. Evidence for this is that Macron’s entire economic plan put to the French electorate has already been rejected by both Berlin and Brussels despite what the French electorate voted for. France has seen its economy decline steadily since it joined the EU with no prospect of a reversal and Macron will, in the end, do worse than Hollande and that may arise sooner than most think – what then? In addition, the risk premium on French bonds has returned to their 2012 crisis levels signalling more economic trouble down the road.

Heading north, Germany has its own elections in 2017 and is also facing a crisis that is slowly but surely approaching due to falling export demand. Politically the people of Germany are becoming more and more frustrated with propping up the Eurozone – and economically it would be suicide for politicians to do so.

Berlin is already seriously unhappy that the ECB now holds 40 percent of all public debt for its 350 million citizens. This is itself turning into a crisis and likely only to get worse due to the Eurozone’s more than just anaemic economic performance over the last decade, threatened even more so with a global economy that looks increasingly like it might slow even further. Don’t forget that any central bank ‘stimulus package’ is an act of desperation. Also don’t forget that new rules came into being in 2013 on bail-outs, they are called bail-ins. Wait until the queue’s outside banks turn into riots, which they will when citizens find what’s left of their money has been used to prop up casino banking operations where the bets went wrong.

From a political point of view – it doesn’t help that the massive intake of refugees in Germany has seen all sorts of negative consequences but not least the confiscation of private property in Hamburg to house them. This is a brewing political scandal that will not go down well with middle class German voters.

An election in Austria will give the far-right Freedom party (FPO) a good chance of entering national government less than a year after its candidate lost a close-fought presidential runoff battle in what we have just witnessed as the crushing of Austria’s conservative establishment.

The Presidium of the Austrian People’s Party (ÖVP) elected 30-year-old Sebastian Kurz as the new party leader, granting him dictatorial powers. Kurz has a free hand in the selection of leading personnel, the content of the party programme, the details of electoral slates, conducting coalition negotiations and the selection of ministers. Editorials speak of a “one-man party.”

Kurz presented the party with a seven-point ultimatum, to secure himself unlimited power over the party and even went as far as to rename it – “The Kurz/New Peoples Party.”

The OVP has effectively been in government since the end of the Second World War and this new action amply demonstrates how the erosion of democratic principles within the ruling power elite is coming to an end. Brexit and Macron is further evidence.

Relations between America and the EU are in freefall. Washington has already warned Brussels that any further advancement of the creation of an EU army will mean pulling support from NATO. Neither powers will back down on this one.

Sweden has had riots in its capital between police and immigrants. The Dutch row with Turkey over migrant and refugees turned ugly both on the ground and diplomatically. Throughout 2016 there were incidents in the Czech Republic. Not least police say unknown attackers set fire to refugee centre’s. The same happened in Croatia. Even in the most peaceful country in the world on the world peace index – Finland has riots, fights and skirmishes between local residents and migrants.

Over the last two years there have been multiple riot events across Europe. Belgian police fire TEAR GAS at their own soldiers as they protested against politicians. It’s the same from Italy and Cyprus, to Bulgaria and Slovenia.

Mark Blyth, a professor of political economy, a Brown University lecturer was one of only a few academics who correctly guessed three of the biggest political shocks of recent. Speaking on BBC Newsnight, he called Brexit, Trump and the Italian NO result in its recent referendum. Blyth also predicts that Britain’s triggering of Article 50 will not come to much as the EU will not survive long enough to see the negotiations reach a conclusion in the first place.

Forbes says “However, with German Chancellor Angela Merkel the only member of the old guard left standing, 2017 could be the year the EU collapses under its own weight.”

Influential geopolitical forecaster and strategist George Friedman says: “The EU is merely a treaty between nations, not a federation. As such, there is nothing holding it together except the promise of prosperity. When that prosperity is no longer forthcoming, people will leave.”

Experts, economists and forecasters are now lining up (HERE, HERE, HERE) to say the same.  Talk is of the currency collapse first. As history has proven many times, governments prefer a soft default over hard ones. A re-denomination back into national currencies is practically the only choice left available. This will destroy savings overnight, estimated to be approximately 60 percent – and with it the 28 nation bloc will completely break down into those four regions previously mentioned and the union will be no more.

Fostered by an unpopular centralised ideology, the European Union is now firefighting every corner of its empire. The greatest immediate tests are emerging from the transition of a disintegrating political system that fostered a massively increased trade and cultural exchange system that is now uncontrollably driving increased tensions. It appears that the political class within the EU is already on the verge of losing control completely.