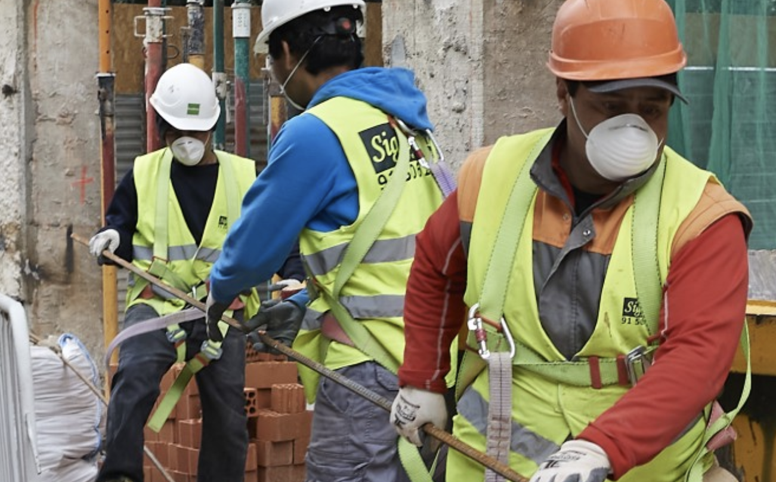 By Alejandro López: Working-class anger is rising against the Socialist Party (PSOE)-Podemos government, which forced millions of nonessential workers back to work on Monday as thousands continue to fall ill each day from the raging COVID-19 pandemic.

The measure, enforced by the unions, threatens to lead to hundreds of thousands of more infections and tens of thousands of deaths. With 169,496 cases and 17,489 deaths, Spain has among the highest COVID-19 death rates on the planet.

Yesterday millions of construction workers, metalworkers, builders, cleaners, factory and shipyard workers, sanitation and security employees and autoworkers returned to work, after factories and construction sites had closed for a two-week shelter-at-home period.

The ruthlessness, greed and indifference to workers’ lives were reflected in the complete disorganization on the first day back to work. The distribution of around 10 million masks by the authorities, handed out in buses and subways in urban areas, was chaotic.

Madrid’s transport chief Angel Garrido tweeted: “Neither the Madrid region nor any other local transport authority has any information about the distribution of masks announced by the Health Minister.”

The police and Red Cross were told to distribute millions of masks on the evening before the return to work. In some areas, there was no distribution, and in most the supply of masks ran out within hours. As of this writing, it is still unknown if more masks will be provided in coming weeks; those distributed on Monday are recommended for single use.

The Spanish government also published a nonsensical guide for workers and businesses. Workers are advised to avoid crowding in public transport, even though hundreds of thousands depend on mass transit to go to work. They are also told to clean their mobiles phones, clothes and shoes when they come back home, showing that the government knows these workers will be contaminated.

Anger at the so-called “progressive” government’s policy is rising among workers. A locksmith at a construction site told eldiario.org: “I have no other choice. It doesn’t seem normal to have to return to work, but we have no other option.” He added, “I have to continue covering expenses. With the subsidies that the government promises we can’t do anything.”

Sandra told La Vanguardia the masks were just single-use: “They distribute masks for one day, as if we don’t have to work from Monday to Friday.” Another worker told the same daily that she woke up early to go to get masks because her company does not provide her any, nor other protection. She complained that the masks are “not distributed at all stations.”

They are not giving me anything, and there are colleagues who work with nothing

A Madrid bricklayer told El País, “I don’t know why the hell we have to go back if there is no way of keeping distance from each other … I only hope that my colleagues also work with a mask. If not, we’re screwed.”

Another construction worker, Sergio, complained, “I keep coming with my gloves and with my mask. They are not giving me anything, and there are colleagues who work with nothing.”

Sergio also said he was forced back to work even though a holiday was scheduled. His company wants to start clawing back hours lost during the eight working days lost during the lockdown. The policy was designed by the PSOE-Podemos government and supported by the unions, which means big business plans to regain all the hours lost by lengthening the working day or eliminating vacation days.

At another site, another worker said, “This must stop once and fall all.” Fearing to infect his teenage children, he said his company “is asking us to maintain social distance and wear masks and gloves. But we have to bring them. We are on our own.”

The policy has been fully endorsed by the social-democratic General Union of Labor (UGT), who designed the policy last Friday with Podemos’ minister of labour, Yolanda Díaz. They were well aware that most companies “are not in a position to guarantee these health and safety conditions.” Nonetheless, Podemos and other unions all worked together to force workers back to work in unsafe conditions.

Yesterday the secretary of the UGT’s Federation of Industry, Construction and Agriculture (FICA), Pedro Hojas, admitted: “it is true that there is a shortage of PPE” (personal protective equipment, such as masks, gloves, etc).

The minority General Confederation of Labour (CGT) union made toothless complaints about the back-to-work order while providing the government with advice on how to implement it. One of the more ghoulish proposals was to urge that if a worker in these nonessential industries dies of COVID-19 in this period, it should be ruled a work-related death.

This is creating the conditions for an explosive confrontation between the working class and the PSOE-Podemos government. In a reactionary attempt to paper over these class contradictions with rhetoric about national unity, this government is now seeking talks on social and economic policy with all the parliamentary parties. It wants an agreement “open to everyone,” that is, including the fascistic Vox party. This offer, made as they force millions of workers to risk their lives needlessly going to work, is a warning that Podemos and the PSOE is trying to complete the transition to an authoritarian regime.