Will The EU Be Able To Return To A Normal Trading Union Once The Eurozone Collapses? 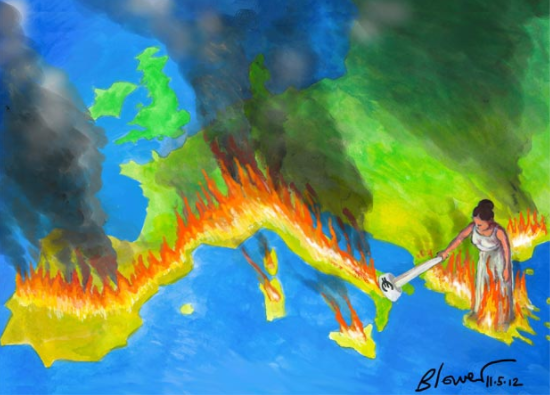 By Graham Vanbergen – Make no mistake, the currency of the Eurozone will not make it in medium term, let alone the long-term. That is, according to the experts.

Peter Navarro, the head of President Trump’s National Trade Council, said in a recent interview in the Financial Times that the euro is “like an implicit Deutsche Mark” that gives Germany an advantage when it comes to exports over other members. Whilst he fails to understand that Germany has always had an export led economy, there is a lot of truth in what he says when it comes to other European economies trapped inside a frigid and inflexible currency system.

Due to flat economic performance that has required trillions in CPR in a vain attempt to resurrect the Euro’s dying moments the political elite continued with an ideologically driven austerity programme and did little about mass unemployment during a time of huge immigration. Many commentator’s in recent years have said this is the eurozone’s ‘lost decade’ but, in reality, they have now turned even more fatalistic and come to the conclusion that it is really the Eurozone’s last decade.

Joseph E. Stiglitz, professor at Columbia University, recipient of the Nobel Memorial Prize in Economics surmised in his article to Fortune just three months ago that this well-intentioned experiment has failed and done so at great cost to the citizens of Europe and interestingly he says the same of their democracies. He also predicts 2017 as the likely sell by date for the Euro.

The ECB’s first chief economist and a towering figure in the construction of the single currency, Omar Issing said just a few months back of the eurozone: “One day, the house of cards will collapse.” He went on to say that “the euro has been betrayed by politics”, lamenting that the experiment went wrong from the beginning and has since degenerated into a “fiscal free-for-all that masks festering pathologies.”

Senior European Central Bank official from 2006 to 2012, Jürgen Stark, also said that the ‘destruction’ of the Eurozone may be necessary if countries are to thrive again.

It seems that the most qualified to understand and predict the future remain truly pessimistic about Europe’s future, especially those caged in the currency trap.

Although many economists, bankers, brokers and financial pundits are now lining up predicting the imminent demise of the Euro, few are predicting the actual outcome.

The way citizens all across Europe see it is that they have been repeatedly abused by what now appears to be an entitled minority who, with impunity have advanced their selfish agendas whilst remorselessly destroying the lives of others. This transgression through globalisation on the one hand and federalisation ambitions on the other is violating national boundaries and turning individual nations against each other, causing the decline of democratic values and the rise of authoritarian tendencies in its wake.

The Greeks are increasingly antagonistic towards Germany for the looting and pillage of their country when democracy was dismantled after the vote to resist the Troika.  Swastika and Nazi induced graffiti adorn walls across Athens that remains unremoved, confirmation of a rising bitterness. The Spanish, Italians and Portuguese have a growing resentment that the media have suppressed as have the French towards Berlin. Tens of thousands of protests across these countries remain unreported. Type “austerity protests in Europe” and not a single page emerges on Google throughout 2016, yet many took place.

For all of the fanfare and great win in the Netherlands election recently, where ‘populism’ was supposedly defeated, the loser in Geert Wilders’ Party for Freedom gained four seats in the lower house, his opponent, the winner in the VVD party lost 10 of 41 seats – hardly the stunning victory the headlines will have everyone believe. With only 150 seats being contested these are big moves. Here, the loser is the winner and the winner is the loser. In the Netherlands, just as in Britain where the Tories now have an astonishing 18 point lead, Labour have all but been abandoned. The same in the USA with Trump’s rise to the Whitehouse. France, with Marine LePen threatens the entire European project as it too moves politically from left to right.

The political class in Europe still don’t get it. They marched on in the headwinds of huge protests across the continent with TTIP and CETA trade deals irrespective of the emerging consequences.  Corporate malfeasance and crime remains unchallenged as austerity relentlessly crushes living standards and the middle classes. Attempts to force a single government into power with a largely unaccountable European Commission funded by unrestrained lobbying and an unchallenging parliament have done nothing but to fan the flames of acrimony, rekindling many grudge wounds from previous world wars and the generations it affected.

Thousands (but not millions), work in Brussels hoping for a federalised Europe. Their livelihoods and pensions depend on it. In addition, over 40,000 parasitical lobbyists feast on a corporate gravy train spending hundreds of millions on crooked politicians in Brussels whose raison d’être is simply to usurp public interest legislation purely for profit. People have had enough.

The result – popular movements in France, Spain, Italy, Sweden, Belgium, Germany, Hungary and Poland for a U.K.-style referendum is providing another serious headache for the powers that be in their publicly funded ivory towers. Greece is consistently toying with economic collapse and may be the first to leave the euro prompting a Eurozone failure. But there are other threats all culminating in the view that the Euro currency is as good as dead in the water.

A failed euro would certainly compromise the so-called “Schengen Area,” named after the 1995 Schengen Agreement. Under this agreement, 26 separate European countries that agreed to allow the free movement of people, goods, services and capital within the borders of the eurozone would end. Physical borders would instantly appear. Free movement of people and capital would grind to a halt and a combination of immigration, currency and quite possibly even trade conflicts would likely start.

International trade and economic growth would falter, political consequences could be serious. Switching back to national currencies will bring its own complications – mainly because never in history have so many countries done so all at the same time. For instance, Greece could re-denominate its currency in a weakened position, only to fuel inflation thereby reducing its debt burden to creditors who would substantially lose out.

The eurozone was originally constructed around the concept of creating a European counterpart to the U.S. Federal Reserve – itself a failing relic of private enterprise in the ‘land of the free’. The demise of the euro would decentralise monetary authority back to the member nations and revalue assets in different countries creating instant winners and losers.

Human nature is such that old grudges would emerge, energised by nationalism in the name of security.

More extreme political parties would gain considerable power very quickly in this environment because the one common denominator of recent elections has been the rise of leaders willing to forgo the protection of democracy, civil liberty and civil rights in exchange for unprecedented powers. This has been misinterpreted by citizens all over the West who believe that a ‘strong leader’ will lead them to refuge and bring back a former glory – they won’t.

America and Britain are leading the way in legislating their way towards authoritarianism. This is no better demonstrated than the (now disclosed) mass surveillance apparatus, restrictive social laws and journalistic restraints to name just a few. Ironically, the East Germans are now more free than Britons or Americans are when it comes to state surveillance.

Perhaps 2017 will be the year that European leaders will wake up, sensing a real existential threat and in the urgency of the time, reform the entire structure of what exists in the Eurozone. It is more likely that they will simply keep legislating with their heads buried deep in the sand until the sound of the implosion becomes too great to ignore.