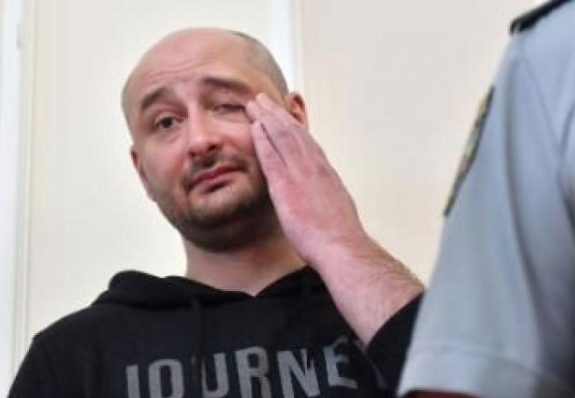 By Joseph Fitsanakis – IntelNews: Western audiences were treated to a small taste of the bizarreness of Eastern European politics this week, when a Russian journalist who had reportedly been assassinated by the Kremlin, made an appearance at a live press conference held in Kiev. On Tuesday, Ukrainian media reported that Arkady Babchenko, a Russian war correspondent based in Ukraine, had been shot dead outside his apartment in the Ukrainian capital.

A day later, after Babchenko’s murder had prompted global headlines pointing to Russia as the most likely culprit, Babchenko suddenly appeared alive and well during a press conference held by the Security Service of Ukraine (SBU). The SBU then said that Babchenko’s killing had been staged in an attempt to derail a Russian-sponsored plan to kill him. The bizarre incident concluded with Babchenko meeting on live television with Ukrainian President Petro Poroshenko, who praised him as a hero. Later that night, the Russian journalist wrote on his Facebook page that he planned to die after “dancing on [Russian President Vladimir] Putin’s grave”.

Welcome to Ukraine, a strange, corrupt and ultra-paranoid state that is on the front lines of what some describe as a new Cold War between the West and Russia. Like the Cold War of the last century, the present confrontation is fought largely through information.

The Russian government, which appears to be far more skillful than its Western adversaries in utilizing information for political purposes, immediately sought to capitalize on the Babchenko case. In fact, this baffling and inexplicable fiasco may be said to constitute one of the greatest propaganda victories for the Kremlin in years.

Ever since accusations began to surface in the Western media about Moscow’s alleged involvement in the 2016 presidential elections in the United States, Russia has dismissed these claims as “fake news” and anti-Russian disinformation. When Sergei and Yulia Skripal were poisoned in England in March, the Kremlin called it a false-flag operation. This is a technical term that describes a military or intelligence activity that seeks to conceal the role of the sponsoring party, while at the same time placing blame on another, unsuspecting, party. Most Western observes reject Russia’s dismissals, and see the Kremlin as the most likely culprit behind the attempt to kill the Skripals.

As one would expect, Russia stuck to its guns on Tuesday, when the world’s media announced the death of Arkady Babchenko in the Ukraine.

Moreover, Babchenko’s staged killing could not possibly have come at a worse time for Ukraine and its Western allies. In the current environment, global public opinion is extremely sensitive to the phenomenon of ‘fake news’ and disinformation. Within this broader context, the Ukrainian state and its intelligence institutions have placed themselves at the center of an global disinformation maelstrom that will take a long time to subside. In doing so, the government of Ukraine has irreparably harmed its reputation among the general public and in the eyes of its Western allies. The Kremlin could not possibly have asked for a better gift from its Ukrainian adversaries.

The amateurishness and recklessness of some Eastern European countries that the West sees as allies in its confrontation with Russia, such as Ukraine, Poland, Hungary, and others, would be humorous if it were not so dangerous.

It is one thing for the West to be critical of the Kremlin and its policies —both domestic and foreign. It is quite another for it to place its trust on governments and intelligence services as those of Ukraine, which are clearly unreliable, unprofessional, and appear to lack basic understanding of the role of information in international affairs.

The updated ministerial code – and the war against reality