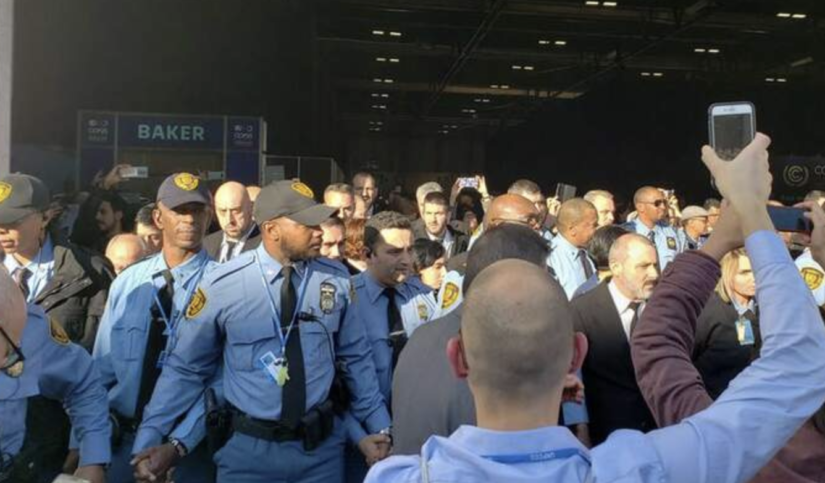 The halls of the UN climate negotiations in Madrid are unusually quiet this evening, as non-governmental organisations were ejected from the venue following a protest.

Hundreds of people staged an action within the conference centre, which protesters had been planning since the weekend in response to sluggish progress at the talks. But the protest was not authorised to take place by the UN’s climate body.

The moment protesters unfurled their banners, UN security “descended on us”, Brandon Wu of ActionAid USA told DeSmog. “The police linked arms and marched us out the door. It was literally chaos.” The Spanish police took over from UN security, he said, and held protesters in small groups outside the venue, before allowing them to disperse.

Protesters are now unable to return to the building. Many still have belongings in their offices, including computers and coats, and it is uncertain whether they will be permitted to attend the final two days of the negotiations.

Amalen Sathananthar, a Malaysian activist with the Artivist Network who coordinated the protest, said he was left physically and emotionally drained by the protest and the response of the UN security, after he was left outside without a coat, after being told that he would be allowed to return to collect his belongings.

He told DeSmog that the heavy-handed response of the UN was symbolic of narrowing space for civil society participation at the talks.

“This shows you that the UNFCCC cares more about the governments rather than the civil societies, even though they say they have a lot of support for civil society. It looks like something they’re saying, but not meaning,” he said.

The ban extends beyond those who were involved in the protest, and even beyond those who are campaigning for climate action. University researchers, business organisations and even climate science deniers are likely to fall foul of the blanket ban on the “yellow badge” that indicates that an individual is a member of a non-governmental organisation.

The halls of the COP are now notably quiet, with participants made up of mainly country delegations, journalists, and UN staff.

Campaigners were quick to condemn their eviction from the negotiations. The protest was led by youth, women, indigenous peoples, workers and climate justice movements, and was intended to drive progress, said campaigners in a joint statement, noting that their motto was “step up, pay up.”

“Instead of listening to our voices, they attempted to silence us. We were pushed, bullied, and touched without our consent. We were driven out of the negotiating halls, told that we can take our action outside as they raised an enormous metal door and herded us out,” said the civil society groups, which include 350, Amnesty International, and the Indigenous Environment Network.

“We stood out in the cold, many without our jackets and coats as we later watched the enormous metal door lock us out in the cold. An Indigenous woman was not allowed to go back inside to feed her baby. This has never happened before in 25 years of negotiations,” the groups’ statement said.

The decision to protest was the result of frustration about lack of finance for countries suffering the impacts of climate change (known as “loss and damage”), the role of carbon markets in the negotiations, and backwards steps on the role of gender.

Harjeet Singh, of ActionAid India, who spoke to DeSmog while standing outside the venue said:

Many activists also expressed frustration that the demands of society outside the talks, including the huge wave of activism that has accompanied the rise of Greta Thunberg, is not being reflected in the negotiations.

“From Santiago to Madrid, the world is waking up to the climate crisis. We have listened to the frontline communities, the science and the suffering of our people. We say enough!” said Angela Valenzuela, from Fridays for Future, in a statement.

“We no longer will support the systems that drive the climate crisis. We will continue to raise against governments that don’t represent us, and that prioritize profit over the wellbeing of its people and climate.”