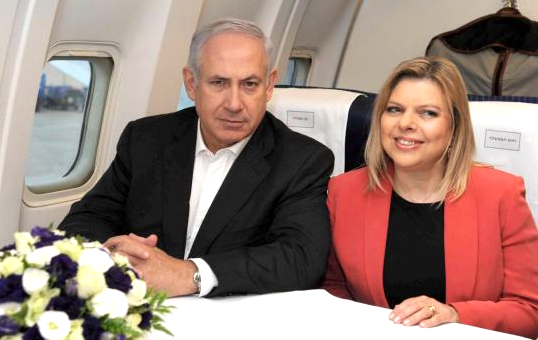 By Jonathan Cook: Benjamin Netanyahu and his wife are both facing potential charges, raising questions about the prime minister’s future.

The threat of criminal indictment that has hung for months over Benjamin Netanyahu, Israel’s prime minister, loomed much larger this weekend as it was announced that his wife, Sara, faced potential criminal charges.

Israel’s attorney general, Avichai Mandelblit, said on Friday that he intended to indict Sara Netanyahu with fraudulently diverting some $100,000 from public funds. The charges carry a maximum sentence of five years in jail.

The case, one of a number of corruption investigations the couple face either jointly or separately, concerns allegations that the prime minister’s wife billed the state for excessive sums in running his official residence.

Mandelblit has taken the unusual step of allowing Sara Netanyahu a hearing to present her side of events before indictment – a concession normally reserved for public officials. Many observers assume she will ultimately get a plea deal to avoid jail time.

Benjamin Netanyahu quickly took to Facebook to call the draft indictment “absurd” and “baseless”, adding that his wife was “a brave and honest woman and has never done anything wrong … She spends a lot of time helping children with cancer, Holocaust survivors and lone soldiers.”

The charges are likely to strengthen suspicions against the Israeli prime minister as he tries to stave off four other corruption investigations.

Michel Warschawski, an Israeli political analyst, said that Sara Netanyahu’s indictment would seal the prime minister’s fate. “This will serve as an aperitif before the main meal,” he told Al Jazeera. “Far too much evidence has mounted up against Netanyahu. The police and justice system can only drag their feet for so long.”

According to reports in Israeli media, police sources believe the way the Netanyahus ran their official residence reflected a pattern of behaviour.

In one of the other corruption scandals, the pair are suspected of receiving gifts from wealthy businessmen worth hundreds of thousands of dollars, including jewellery, pink champagne and luxury cigars.

Police reportedly believe they can show that the gifts were accepted as bribes – in return for the Israeli prime minister peddling influence on the tycoons’ behalf.

Last week, unnamed law enforcement officials told Israeli media that they would recommend Netanyahu’s indictment before the year’s end in this and another investigation, regarding backroom deals to influence media coverage.

The ultimate decision to charge the prime minister, however, rests with the attorney general, who was appointed by Netanyahu. He has been widely accused of drawing out the investigations.

The inquiry into Sara Netanyahu began two years ago, following a report by Joseph Shapira, an official watchdog known as the state comptroller, into management of the prime minister’s official residence in Jerusalem.

Shapira discovered massively inflated spending. He accused the Netanyahus of using public money to furnish and improve their private home in Caesarea and to pay for the care of Sara’s elderly father. Sara was also suspected of pocketing thousands of dollars in refunds from bottle returns, and exaggerating dinner party numbers to justify hiring private chefs.

The report contributed to an image of Sara Netanyahu as “Israel’s Marie Antoinette”.

Mandelblit, however, failed to include most of these allegations in his draft indictment. The charges relate only to excessive spending on catering. Amir Oren, a senior columnist with Haaretz, accused the attorney general on Saturday of doing only “half the job”.

The Netanyahus have blamed their former chief caretaker, Meni Naftali, for running up the huge bills.

Naftali won damages against Sara Netanyahu last year for abusing him and other members of the household staff. He has accused her of temper tantrums and drinking up to three bottles of champagne a day.

Netanyahu himself was not investigated in what is being called the “meals-ordering affair”, after the couple claimed he took no part in managing the official residence.

Given the number of unresolved scandals engulfing the Netanyahus, the response from fellow politicians has so far remained muted, noted Warschawski.

Tzipi Livni, a former justice minister, limited her criticism to the prime minister’s Facebook posts. “What hasn’t been heard is an appropriate response from a decent prime minister,” she said on Twitter.

That may in part be explained, said Warschawski, by the fact that the investigations are having “little impact” on many of Netanyahu’s traditional core supporters. Instead, the prime minister has presented himself as a victim of persecution by the police, justice system and media.

By contrast, opposition demonstrators have accused the attorney general of procrastinating. Naftali, the Netanyahus’ former caretaker, is among the leaders of a large weekly protest rally outside Mandelblit’s home.

Yossi Alpher, who once served as an aide to former Prime Minister Ehud Barak, said Netanyahu would be more worried about the scandals’ cumulative effect on the right’s wider base of support.

“The impression is gaining ground that the Netanyahu family interpreted the premiership as a licence to live like kings,” he told Al Jazeera.

“One cannot ignore the politics of this, either. The allegations will eventually encourage rivals of the Netanyahus on the right to rear their heads and challenge him.”

Police sources have told the Israeli media that they are making strong headway in the investigations.

“Netanyahu is in big trouble,” said Warschawski. “Many members of his inner circle are either under arrest or about to be. They are turning state witness. The trail of suspicion will keep leading to him.”

Gag order to be lifted

A significant development is expected on September 17, when a gag order is due to be lifted on the testimony of Netanyahu’s former chief of staff, Ari Harow, who turned state witness last month. His statements are reported to provide damaging information in the two main corruption investigations faced by the prime minister.

In the first – dubbed Case 1000 – the Netanyahus have admitted to receiving lavish gifts worth hundreds of thousands of dollars from a wide range of businessmen.

According to law enforcement sources, new testimony from one, Arnon Milchan, a Hollywood mogul and former Mossad agent, has served to strengthen suspicions that Netanyahu accepted the gifts as bribes.

Milchan, who was questioned last week for the first time as a criminal suspect, reportedly said he had approached Netanyahu both for help in lobbying US authorities for a 10-year visa and for assistance with selling shares in Israel’s troubled Channel 10 TV station.

A second investigation – Case 2000 – is also advanced. Taped conversations between Netanyahu and Arnon Mozes, a media publishing magnate, suggest the prime minister tried to cut a secret deal with Mozes for more positive coverage from his titles.

Netanyahu indicated to Mozes that, in return for his Yedioth Ahronoth group’s support, he would pass a law imposing a cover charge on Israel Hayom, a free newspaper known for cheerleading the prime minister. The move would have weakened the circulation of Yedioth Ahronoth’s main rival.

Phone logs released last week embarrassed Netanyahu by appearing to contradict his claims that he had no influence over Israel Hayom’s coverage. They show that he was in regular contact with the paper’s editor.

Israel Hayom is owned by US casino magnate Sheldon Adelson, a strong Netanyahu supporter and a major donor to the US Republican party.

In the background are two additional corruption scandals that risk engulfing Netanyahu.

Case 3000, the most serious of all the investigations, involves allegations of bribery and corruption among Netanyahu’s inner circle over a $2bn deal to buy German-made missile boats and submarines. The case has yet to implicate Netanyahu directly, but investigators have homed in on officials close to the prime minister.

David Sharan, a former key adviser to Netanyahu, was arrested this month on suspicion of accepting bribes in the affair, as was Eliezer Sandberg, a former government minister and ally of Netanyahu’s. Other figures close to the prime minister under investigation include Harow; David Shimron, Netanyahu’s lawyer and cousin; and Avriel Bar-Yosef, appointed by Netanyahu to the National Security Council.

Germany has threatened to cancel delivery if corruption is confirmed. The three Dolphin subs are due to join an existing fleet capable of carrying nuclear warheads.

Netanyahu’s former defence minister, Moshe Yaalon, told CNN in July that he was “absolutely” sure Netanyahu would be indicted over the submarine affair. He accused the prime minister of interfering to advance the purchase of the submarines against the advice of defence officials.

Netanyahu, however, has claimed he knew nothing about the contract, even though Shimron, his lawyer, was also representing ThyssenKrupp, the German shipbuilder responsible for the submarines’ manufacture.

But, as Israeli analyst Ben Caspit has observed, Netanyahu’s denials may not wash with the public. If he really did not know of Shimron’s involvement in the submarine deal, “it could cause a lot of people to wonder if such a person is sufficiently competent to lead the country”.

The subs are seen as a vital national security issue and one that Netanyahu should have been closely supervising.

A fourth investigation, Case 4000, was opened in July after the state comptroller reported on dealings between the communications ministry, until recently a portfolio held by Netanyahu, and Bezeq, Israel’s telecoms giant.

Netanyahu fired Avi Berger as director of the ministry, ending the latter’s efforts to advance broadband reforms that would have harmed Bezeq. Netanyahu replaced Berger with Shlomo Filber, a former aide, who is alleged to have provided Bezeq with confidential documents.

Another Haaretz analyst, Amos Harel, wondered last week what it said about Netanyahu that he had managed to “surround himself with so many people suspected of crimes or disciplinary violations”.

Warschawski warned that a cornered Netanyahu could prove dangerous. “He desperately needs distractions from these scandals,” he said. “A ready-made target is always Gaza. The danger is that he tries to heat up things there and starts a war.”