The Dual Between Big Tech And Big Government 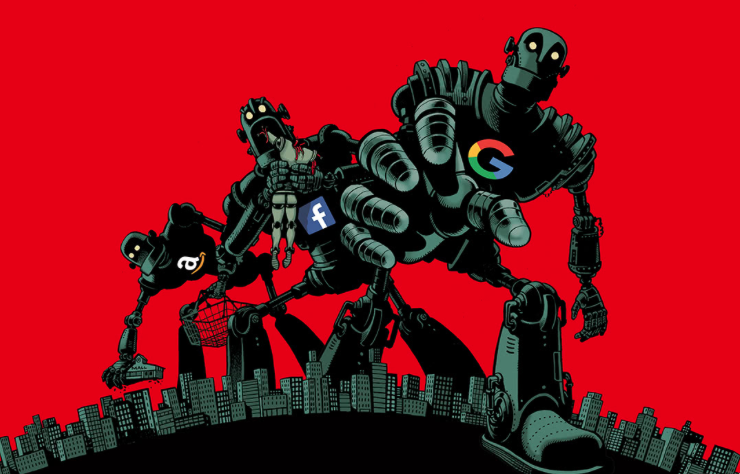 By Graham Vanbergen: Just five years ago you had no notion that ‘big data’ would overtake oil as the number one traded commodity in the world, never heard of Bitcoin, that social media would play a significant role in reshaping global politics, that artificial intelligence and automation would threaten our way of life. The power politics duel between big tech and government is on. At this pace of change, what do you think the next few years will bring?

It is difficult to believe that in such a short time frame, global politics, led by a chaotic American administration would only arrive because technology pushed the boundaries of propaganda and social influence and with it a new and dangerous era of isolationism and protectionism. Threats to the world order that has dominated for the last seven decades are now commonplace.

It’s actually quite a scary moment in time.

Tech firms have captured an amazing 42 percent of all the rises in the value of America’s stock market since 2014. (1)

Last year, Ford fired is boss Mark Fields for his complacency about technology despite near record profits in a challenging year, whilst Ford’s competitor General Motors goes all out in developing a range of autonomous electric cars.

Gene editing, a new form of personalised health care is about to arrive and trigger a total transformation of the expectations of health care and human longevity. The insurance industry is about to radically change with it as personalised data drives both product and pricing.

We are, right now, on the threshold of a new era, just as industrialisation was in the mid eighteen century. Then, it was a period of huge social and economic change that transformed human life from an agrarian society to an industrial one. It involved the extensive re-organisation of both the economy and the world we lived in. Centralised factories powered by coal and steam changed life radically and with it the institutions that supported society literally collapsed over a period of 70 years as society went through profound change. Politics was forced into dramatic change too.

Industrialisation and globalisation as we understand it are already becoming the old days and the time that civil society has to prepare for such fundamental and unstoppable adjustment is considerably shorter than that of the last industrial revolution.

Within just a few years driverless technology will see taxi drivers, bus drivers and America’s biggest workforce – the truck driver, moved towards obsolescence. Multilingual artificial intelligent systems will replace another massive workforce – customer service workers. Then factory jobs will decline as reliance on human labour is replaced by more cost-effective manufacturing. Algorithms will be managing just about everything in daily life for ordinary citizens. For those whose jobs will be replaced by automation this time around, it’s the speed of the change that will cause huge political dissention.

Technology has already proved that it will propel a few people into ultra-wealth and political influence and the decisions of less people you can count on one hand will determine what half of humanity can see and read each and every day. The high profile owners of Amazon, Google and Facebook have amply demonstrated this already.

Already we can see the effects of these technologies on the economies of the western world. Conventional economics, such as it is, dictates that low unemployment drives wages up but at 4.1 and 4.2 percent unemployment in the US and UK, average earnings have, in real terms, fallen. This is in the backdrop of swiftly rising corporate profits, inequality and rapidly accelerating poverty – a deliberate result of the current political neoliberal ideology. (2)

From a political standpoint we have evidence of what is likely to happen next. The new technologies of the last industrial revolution were harnessed in such a way, as to manifest itself as a creeping authoritarianism that, for instance, gave rise to the crushing of trade union movements and any notion of societal income distribution.

Today, Britain’s recent Trade Union Act, Public Space Protection Orders, the ‘Snoopers Charter’ along with the approaching abolition of the Human Rights Act are all dire warning signs. The alarming reduction in press freedom and censorship of social media and independent news outlets is another.

U.S. constitutional attorney John Whitehead, counsel in the Paula Jones’ sexual harassment lawsuit against President Clinton describes what is emerging in America: “We are inching ever closer to a constitutional crisis the likes of which we have never seen before, and “we the people” are woefully unprepared and ill-equipped to deal with a government that is corrupt, unjust, immoral, unaccountable, non-transparent, fascist and as illegitimate as they come.”

Whitehead is describing the failure of the state in rapidly changing times.

This is evidenced by a truly Orwellian system built by Palantir, a data-mining company constructed by President Trump’s tech advisor Peter Thiel, who contributed to Trump’s ascendency to the Whitehouse in the social media coup over democracy. The Intercept describes this new technology as “deploying a new intelligence system, that will assist in President Trump’s efforts to deport millions of immigrants from the United States.” (3)

It is a “system providing its users access to intelligence platforms maintained by the Drug Enforcement Administration, the Bureau of Alcohol, Tobacco, Firearms and Explosives, the FBI, and an array of other federal and private law enforcement entities. It provides agents access to information on a subject’s schooling, family relationships, employment information, phone records, immigration history, foreign exchange program status, personal connections, biometric traits, criminal records, and home and work addresses.”

What this shows is that would be tyrants, now armed with new and ever more powerful tools will be able to attack and punish their perceived enemies whilst controlling ordinary citizens with frightening technologies. Social credit scoring systems are due for nationwide implementation in just two years time in China. Behave in a way that the government does not approve of and you will be penalised.

Many researchers say machine-learning algorithms are being given far too much power already. They are invisibly influencing decisions on all manner of important issues to society. The corporations who build them create the image that they are unbiased and objective. Edward Snowden’s 2013 revelations of government surveillance tools demonstrated you cannot trust government with technology or the corporations that build them.

There is a certain inevitability about these new technologies, just as it was in the 1850’s. A ‘crisis of governing’ atmosphere already exists in the democratic west where politicians are now no longer beholden to constituents or their communities but to online supporters. They are no longer looking to persuade people with ideas; they are merely identifying those most likely to vote for them and will exclude everyone else. This is how communities will fall apart in the near future.

The likely scenario further down the line is that working age adults could well be facing chronic unemployment and plummeting living standards as a result of the fourth industrial revolution. Reactionary and revolutionary forces may gain a foothold to defend economically crushed communities, as politicians simply no longer respond to their needs.

Contempt for politicians will rise even further, not only among citizens but from the tech industry, which often assumes that a short-term governing party is little more than an obstacle to be overcome anyway.

Things will probably get worse before they have any chance to get better. For instance, after years of dismal reports and data, climate change has simply not got politically scary enough. Does it have to get violent before they listen?

At the beginning of the information technology revolution in the 1990s there was widespread hope that it spelt doom for authoritarians on the grounds that they would not be able to control it. The opposite has happened. The Internet has not democratised anywhere near as much as we have been led to believe.

In the meantime, excuses for government’s are quickly running out. First it was the inflationary period, then unemployment, then public debt, then financial deregulation so that citizens could borrow money to buy the type of things they wanted but could no longer afford. Everyone is tired of this failed economic experiment.

As demonstrated with Trump, the duel is already on as tech firms attempt to gain control of politics as they now understand they have the capability to dictate who gets into power.

The pace of change is quick. The transfer of power will be to an ever more authoritarian government or a tech regime. Either way, feasible democratic options are likely to evaporate in years to come.