Gaza’s Economy Collapses, So Does Any Hope Of Peace 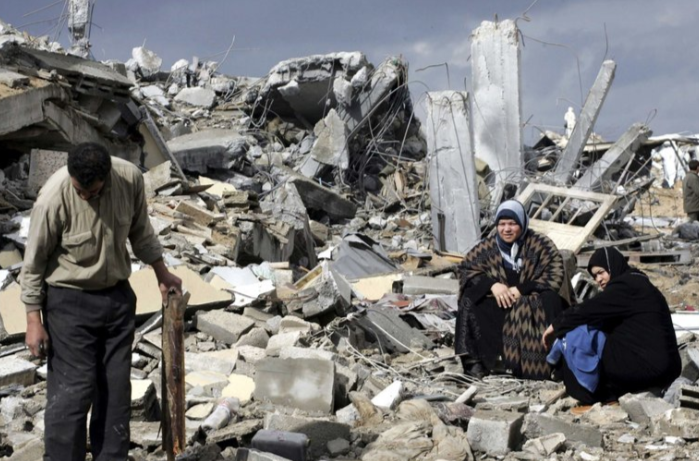 By Jonathan Cook – Nazareth, Israel. The moment long feared is fast approaching in Gaza, according to a new report by the World Bank. After a decade-long Israeli blockade and a series of large-scale military assaults, the economy of the tiny coastal enclave is in “freefall”.

At a meeting of international donors in New York on Thursday, coinciding with the annual meeting of the United Nations General Assembly, the World Bank painted an alarming picture of Gaza’s crisis. Unemployment now stands at close to 60 per cent and the economy is contracting at an ever faster rate.

While the West Bank’s plight is not yet as severe, it is not far behind, countries attending the Ad Hoc Liaison Committee were told. Gaza’s collapse could bring down the entire Palestinian banking sector.

In response, Europe hurriedly put together a €40 million aid package, but that will chiefly address Gaza’s separate humanitarian crisis – not the economic one – by improving supplies of electricity and potable water.

No one doubts the inevitable fallout from the economic and humanitarian crises gripping Gaza.

The four parties to the Quartet charged with overseeing negotiations between Israel and the Palestinians – the United States, Russia, the European Union and the UN – issued a statement warning that it was vital to prevent what they termed “further escalation” in Gaza.

The Israeli military shares these concerns. It has reported growing unrest among the enclave’s two million inhabitants and believes Hamas will be forced into a confrontation to break out of the straightjacket imposed by the blockade.

In recent weeks, mass protests along Gaza’s perimeter fence have been revived and expanded after a summer lull. On Friday, seven Palestinian demonstrators, including two children, were killed by Israeli sniper fire. Hundreds more were wounded.

Nonetheless, the political will to remedy the situation looks as atrophied as ever. No one is prepared to take meaningful responsibility for the time-bomb that is Gaza.

In fact, the main parties that could make a difference appear intent on allowing the deterioration to continue.

Israeli Prime Minister Benjamin Netanyahu has ignored repeated warnings of a threatened explosion in Gaza from his own military.

Instead, Israel is upholding the blockade as tightly as ever, preventing the flow of goods in and out of the enclave. Fishing is limited to three miles off the coast rather than the 20-mile zone agreed in the Oslo accords. Hundreds of companies are reported to have folded over the summer.

Intensifying the enclave’s troubles is the Trump administration’s recent decision to cut aid to the Palestinians, including to the United Nation’s refugee agency, UNRWA. It plays a critical role in Gaza, providing food, education and health services to nearly two-thirds of the population.

The food budget is due to run out in December, and the schools budget by the end of October. Hundreds of thousands of hungry children with nowhere to spend their days can only fuel the protests – and the deaths.

But even if Mr Abbas wished to help, he largely lacks the means. The US cuts were imposed primarily to punish him for refusing to play ball with US President Donald Trump’s supposed “deal of the century” peace plan.

Israel, the World Bank notes, has added to Mr Abbas’s difficulties by refusing to transfer taxes and customs duties it collects on the PA’s behalf.

And the final implicated party, Egypt, is reticent to loosen its own chokehold on its short border with Gaza. President Abdel Fattah El Sisi opposes giving any succour either to his domestic Islamist opponents or to Hamas.

The impasse is possible only because none of the parties is prepared to make a priority of Gaza’s welfare.

That was starkly illustrated earlier in the summer when Cairo, supported by the UN, opened a back channel between Israel and Hamas in the hope of ending their mounting friction.

Hamas wanted the blockade lifted to reverse Gaza’s economic decline, while Israel wanted an end to the weekly protests and the damaging images of snipers killing unarmed demonstrators.

In addition, Mr Netanyahu has an interest in keeping Hamas in power in Gaza, if barely, as a way to cement the geographic split with the West Bank and an ideological one with Mr Abbas.

The talks, however, collapsed quietly in early September after Mr Abbas objected to the Egyptians. He insisted that the Palestinian Authority be the only address for discussions of Gaza’s future. So, Cairo is yet again channelling its energies into a futile attempt at reconciling Mr Abbas and Hamas.

At the UN General Assembly, Mr Trump promised his peace plan would be unveiled in the next two to three months, and made explicit for the first time his support for a two-state solution, saying it would “work best”.

Mr Netanyahu vaguely concurred, while pointing out: “Everyone defines the term ‘state’ differently.” His definition, he added, required that not one of the illegal Jewish settlements in the West Bank be removed and that any future Palestinian state be under complete Israeli security control.

Mr Abbas is widely reported to have conceded over the summer that a Palestinian state – should it ever come into being – would be demilitarised. In other words, it would not be recognisable as a sovereign state.

Hamas has made notable compromises to its original doctrine of military resistance to secure all of historic Palestine. But it is hard to imagine it agreeing to peace on those terms. This makes a reconciliation between Hamas and Mr Abbas currently inconceivable – and respite for the people of Gaza as far off as ever.