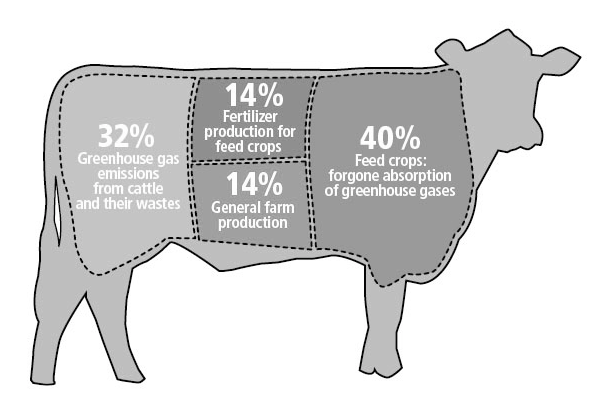 It’s January. Many of us will be thinking about food more than usual. New Year’s Resolutions tend to focus on the personal effects of changing our diets, but it’s also a good time to consider the big issues beyond our own plates.

The economics underpinning our food system

On a personal level the effect is clear: eating less meat reduces the negative impact that our meals have on the environment. Yet as this individual action takes place within a larger economy it’s important to consider the wider knock-on effects as well.

Environmental harm occurs during the production of meat, not the consumption of meat. So to reduce this harm we need to affect the decision to produce.

Fundamental to our understanding of economic systems is that meat producers are responding to demand.

Some argue that when an individual chooses not to eat meat, the product they have avoided will simply be consumed by someone else anyway. Strictly speaking, this may not be the case due to food waste, but it also begs the question how shifts in demand ever take place.

Instead, we would expect that a fall in demand for meat would lead to a reduction in the supply of meat. Even if this fall in demand reduces meat prices, like nearly every other product ever studied, this price adjustment will not cancel out the change in demand completely (perfectly inelastic supply) as faced with lower prices, some farmers may switch from meat production to growing crops or other activities.

In isolation, it might feel like the change in one person’s diet is extremely small, but even a marginal change can result in a supermarket not ordering that extra box of hamburger patties or a supplier delaying their farm order by an extra day. Sales do matter at the margin – many products are priced to the dime, after all.

Small changes are happening, but wider change is needed

On the whole, per capita food consumption has been gradually falling over the past decade in many developed countries like the UK and meat consumption is no exception, although there has been a change in the type of meat being consumed, with carcase meat being swapped for ready-made meals and takeaways, according to 40 years of Defra’s Family Food Survey.

The same dataset shows a 6000% increase in the amount of “soya and novel protein foods” consumed from 1974-2014, and surveys have indicated a rising interest in vegetarianism. However the relative share of meat in British diets has still not changed significantly as vegans, vegetarians and other categories of low or no meat consumption remain a small percentage of the population.

Even if a small change in individual diets was the trend, it is the total change that matters. If we add to this the general increase in meat consumption (and population) projected across most of the world and an extremely troubling picture emerges. A recent study illustrated that on current trends greenhouse gas emissions from food production alone will exceed a 2°C climate budget.

Our diets can have a hugely damaging effect on the environment. Both the wider food system and our collective eating habits need to change if we’re to make a lasting difference, and that will involve some tough dinner table conversations.