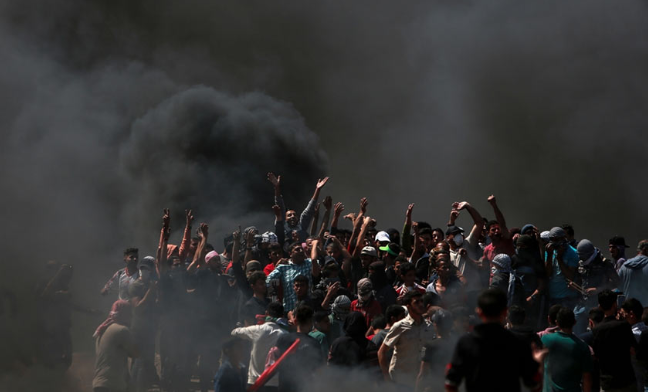 By TruePublica Editor: Do please read this post in the spirit that it has been written. I have not edited this in any way but did want to make a point clear. The contributor is British with foriegn parents and wishes to be anonymous. The contributor has whole-heartedly agreed that when referring to Israel, what is meant is the Israeli government, not all Israeli people.

By Guest Contributor: No doubt this post will be branded as anti-semitic as all criticism of Israel is nowadays. Just a few years ago, I felt, like many, that Israel had a place in the world and it should defend itself like any nation-state. Today, I’m just bored of their constant political meddling in my own country of Britain on the one hand and horrified at their treatment of the Palestinians on the other. I never used to think like this.

Israel has a population of just 8.5 million all told. Over 1.7 million of that are Arabs. There are 38 cities around the world that have larger populations than the country of Israel. It has a land mass of just 21,000 sq km. It is ranked 152 in a world of under 200 countries, some of which are small islands.

Israel is an unsustainable place. It is unable to exist as a functioning nation-state without an environment of its own creation, one of violence and perpetual war.

Israel is just 70 years old, one of the youngest nations on earth but to stop it from collapsing it requires $38 billion in military aid from the United States because Israel’s entire GDP of just $318 billion is not enough to defend it. On top of this Israel currently spends $22 billion a year on ‘defence spending.’ I say $22 billion, that is official spending. One leading report states that figure in 2016 was $55bn.

Tiny Israel (officially) spends more than 5.8% of its GDP, the highest in the industrialized world on its military operations.

Therefore, Israel needs to spend more money per man, woman and child annually than any country in the world to defend itself from the decades-long military operation against the very people it illegally evicted and then mercilessly persecuted. It can only do so through the benevolence of plutocrats, wealthy lobbyists and the protection of foreign countries.

The world’s biggest spender on its military is, of course, America, which includes over 700 military bases situated on three-quarters of the planet. And yet, it does not spend as much as Israel does per person. America has many enemies, some are sophisticated with standing armies, modern weapons of war and equipped with cyber-weapons and so on. Israel’s main enemy are people armed with stones.

Plutocrats are shallow creatures. They are whores to money and nothing else. They have no friends – just sycophants and anyone hanging on for the crumbs they leave behind them.

Once oil, the only resource the rest of the world wants from the Middle East is replaced by the next energy source – and by all accounts that is now in human sight, Israel will be facing a world without that benevolence and surrounded by neighbours filled with hate and revenge in their hearts – with quite possibly no-one there to defend them financially or otherwise because the world is currently very unpredictable. Anything could happen next as geopolitical alliances change with the wind in this region – as they are right now.

Israel executes Palestinians on the streets, many of them are just youngsters, as we have witnessed yet again this last week. Extra-judicial executions, torture in their prisons and hundreds of minors and young children are incarcerated. This is an apartheid regime as wicked as any.

Apartheid was introduced in 1948 in South Africa, the same year Israel was founded.

South Africa’s policies were subject to international scrutiny in 1960, when British Prime Minister Harold Macmillan criticised them during his celebrated Wind of Change speech in Cape Town. Weeks later, tensions came to a head in the Sharpeville Massacre, resulting in more international condemnation.

The UN’s conservative stance on apartheid changed. The Sharpeville massacre had jolted the global neighbourhood, with the apartheid regime showing that it would use violent behaviour to repress opposition to racial inequity.

In April 1960, the Security Council of the UN settled for the first time on concerted action against the apartheid regime.

The USA, UK and Israel were the biggest supporters of apartheid in South Africa at that time.

In 1980, Western patience with the apartheid government began to run out. In 1991, apartheid ended so did the support of the USA and Britain.

To date, dozens of UN resolutions have been passed against the state of Israel for their illegal behaviour. The BDS or Boycott, Divestment, Sanctions movement has had many notable wins including the pull-out of investment by government pension funds in Sweden, Norway, New Zealand and Luxembourg and investors including George Soros, the Bill Gates Foundation, the huge TIAA-CREF public sector pension fund in the US, Dutch pension giant PGGM and Norwegian bank Nordea to name but a few. Churches, academic associations, student unions and more have also joined. Many people refuse to buy Israeli goods from shops.

Today, I personally know no-one who supports what Israel is doing to the Palestinians and it colours their vision of anything else that Israel might do that is good in the world. The world is becoming tired of Israel – you can feel it, just as it did with apartheid South Africa.