Why Is The Israeli Army Suddenly Concerned About Gaza? 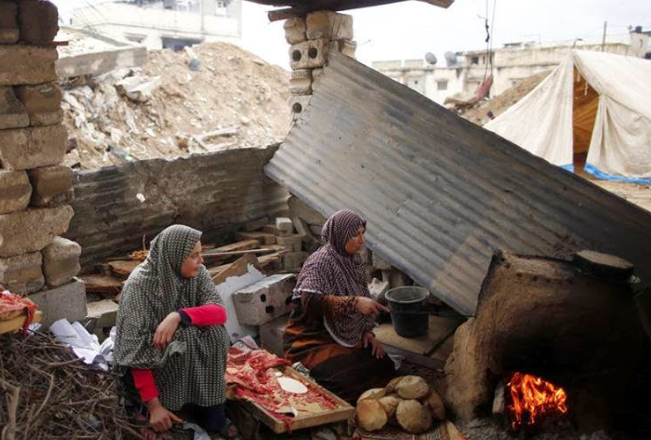 By Jonathan Cook: More than 10 years ago Israel tightened its grip on Gaza, enforcing a blockade on goods coming in and out of the tiny coastal enclave that left much of the two million-strong population there unemployed, impoverished and hopeless.

Since then, Israel has launched three separate major military assaults that have destroyed Gaza’s infrastructure, killed many thousands and left tens of thousands more homeless and traumatised. Gaza is effectively an open-air prison, an extremely overcrowded one, with only a few hours of electricity a day and its ground water polluted by seawater and sewage.

Last week Israeli military officials for the first time echoed what human rights groups and the United Nations have been saying for some time: that Gaza’s economy and infrastructure stand on the brink of collapse. After a decade of this horrifying experiment in human endurance, the Israeli army finally appears to be concerned about whether Gaza can continue coping much longer.

In recent days it has begun handing out forms, with more than a dozen questions, to the small number of Palestinians allowed briefly out of Gaza – mainly business people trading with Israel, those needing emergency medical treatment and family members accompanying them.

One question asks bluntly whether they are happy, another whom they blame for their economic troubles. A statistician might wonder whether the answers can be trusted, given that the sample group is so heavily dependent on Israel’s good will for their physical and financial survival.

But the survey does at least suggest that Israel’s top brass may be open to new thinking, after decades of treating Palestinians only as target practice, lab rats or sheep to be herded into cities, freeing up land for Jewish settlers. Has the army finally understood that Palestinians are human beings too, with limits to the suffering they can soak up?

According to the local media, the army is in part responding to practical concerns. It is reportedly worried that, if epidemics break out, the diseases will quickly spread into Israel. And if Gaza’s economy collapses too, hundreds of thousands of Palestinians could be banging on Israel’s door – or rather storming its hi-tech incarceration fence – to be allowed in. The army has no realistic contingency plans for either scenario.

Nonetheless, neither Israeli politicians nor Washington appear to be taking evasive action. In fact, things look set to get worse.

Israeli prime minister Benjamin Netanyahu said last week there could be no improvements, no reconstruction in Gaza until Hamas agrees to give up its weapons – the only thing, in Hamas’s view, that serves as a deterrent against future Israeli attacks.

Figures show Israel’s policy towards Gaza has been actually growing harsher. In 2017, exit permits issued by Israel dwindled to a third of the number two years earlier – and a hundredfold fewer than in early 2000. A few hundred Palestinian business people receive visas, stifling any chance of economic revival.

The number of trucks bringing goods into Gaza has been cut in half – not because Israel is putting the inmates on a “diet”, as it once did, but because the enclave’s Palestinians lack “purchasing power”. That is, they are too poor to buy Israeli goods.

Mr Netanyahu has resolutely ignored a plan by his transport minister to build an artificial island off Gaza to accommodate a sea port under Israeli or international supervision. And no one is considering allowing the Palestinians to exploit Gaza’s natural gas fields, just off the coast.

In fact, the only thing holding Gaza together is the international aid it receives. And that is now in jeopardy too.

The Trump administration announced last week it is to slash by half the aid it sends to Palestinian refugees via the UN agency UNRWA. Mr Trump has proposed further cuts to punish Mahmoud Abbas, the increasingly exasperated Palestinian leader, for refusing to pretend any longer that the US is an honest broker capable of overseeing peace talks.

The White House’s difficulties will only be underscored on Sunday evening, when Mike Pence, the US vice-president, arrives in Israel as part of Mr Trump’s supposed push for peace.

Palestinians in Gaza will feel the loss of aid severely. A majority live in miserable refugee camps set up after their families were expelled in 1948 from homes in what is now Israel. They depend on the UN for food handouts, health and education.

Backed by the PLO’s legislative body, the central council, Mr Abbas has begun retaliating – at least rhetorically. He desperately needs to shore up the credibility of his diplomatic strategy in pursuit of a two-state solution after Mr Trump recently hived off Palestine’s future capital, Jerusalem, to Israel.

Mr Abbas threatened, if not very credibly, to end a security coordination with Israel he once termed “sacred” and declared as finished the Oslo accords that created the Palestinian Authority he now heads.

The lack of visible concern in Israel and Washington suggests neither believes he will make good on those threats.

But it is not Mr Abbas’s posturing that Mr Netanyahu and Mr Trump need worry about. They should be listening to Israel’s generals, who understand that there is no defence against the fallout from the catastrophe looming in Gaza.