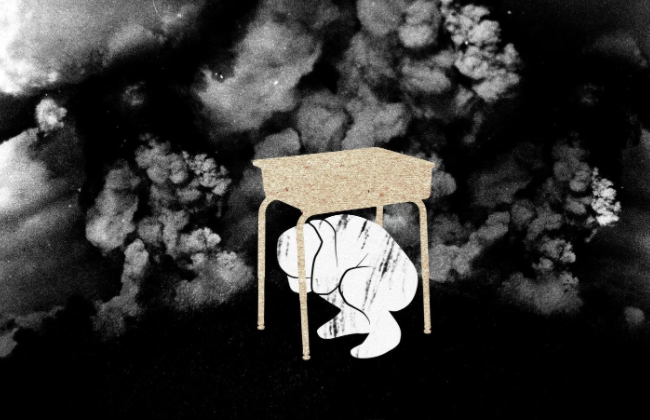 A decade ago the thought of another global conflict was unthinkable – but that prospect appears to be far more probable today. Or, at least, that’s what we are being told.

But let’s not forget that today there are large scale practices that enable large scale control of the masses.  By far the most used is FEAR and it comes in many forms.  One of the most pervasive, used in Western societies, is the fear of “outsiders.” Social pressure is manipulated through the mainstream print and television media and hey presto – Immigrants, religion and terrorism go hand in hand. The government is usually the perpetrator of this type of propaganda and when it gets to fever pitch, it’s a sign that they are trying to consolidate both power and its workings.

Here are a tiny selection of excellent examples, of which there are many.

The Economist magazine, the influential London weekly devoted its latest issue to discussing “The Next War” and “The Growing Threat of Great Power Conflict.” Its lead editorial opens with a chilling warning:

“In the past 25 years war has claimed too many lives. Yet even as civil and religious strife have raged in Syria, central Africa, Afghanistan and Iraq, a devastating clash between the world’s great powers has remained almost unimaginable.

No longer … powerful, long-term shifts in geopolitics and the proliferation of new technologies are eroding the extraordinary military dominance that America and its allies have enjoyed. Conflict on a scale and intensity not seen since the second world war is once again plausible. The world is not prepared.”

wsws.org writes that “The Economist envisages a dystopian, violent future, with the American military deploying to intimidate or destroy purported challenges to its dominance everywhere.

It predicts that in the next 20 years “climate change, population growth and sectarian or ethnic conflict” are likely to ensure that much of the world descends into “intrastate or civil wars.” Such conflicts will increasingly be fought at “close quarters, block by block” in cities ringed by “slums” and populated by millions of people. The future for large sections of humanity is the carnage that was witnessed during last year’s murderous battles over the Iraqi city of Mosul and the Syrian city of Aleppo.

But more chilling are the series of scenarios it outlines for a major escalation in tensions between the United States and Russia and China, presented as Washington’s strategic adversaries, which at any moment threaten to spiral into a nuclear holocaust.”

In July of 2016, Mehring Books published David North’s A Quarter Century of War, which noted:

“Beginning with the first Persian Gulf conflict of 1990-91, the United States has been at war continuously for a quarter century. While using propaganda catchphrases, such as defense of human rights and War on Terror, to conceal the real aims of its interventions in the Middle East, Central Asia, and Africa, as well as its confrontation with Russia and China, the United States has been engaged in a struggle for global hegemony. As the US seeks to counteract its economic weakness and worsening domestic social tensions, its relentless escalation of military operations threatens to erupt into a full-scale world war, between nuclear-armed states.”

However, The Economist also warns that “The greatest danger,” it states, “lies in miscalculation through a failure to understand an adversary’s intentions, leading to an unplanned escalation that runs out of control.”

For the mainstream media there is a macabre fascination for the prospect of an unimaginable global conflict. Pushing this type of conflict has the same undertones from the same unquestioning media who pushed the Western world into wars with Afghanistan, Iraq, Libya and Syria.

HuffPost speculates with the timeline of global destruction to be in 2034: “If the next world war is to happen, it will most likely be in Asia and feature a clash between the incumbent hegemon, the United States, and the principal challenger, China. The good news is China does not want war now and in the foreseeable future, primarily because Beijing knows too well that the odds are not on its side. But if we look ahead, in 2034, the circumstances will have shifted significantly.”

Time magazine decides a global conflict as somewhat closer: “Wars start through any number of pathways: One world war happened through deliberate action, the other was a crisis that spun out of control. In the coming decades, a war might ignite accidentally, or it could slow burn and erupt as a reordering of the global system in the late 2020s, the period at which China’s military build up is on pace to match the U.S.”

The Independent recently wrote that: “One might even argue that capitalism often resolves systemic economic crises through war. After all, a war economy with militarisation, mobilisation, full employment and jingoism can be viewed as the ultimate solution to economic woes and social unrest. The transition of Western democracy to oligarchy and the descent into soft fascism is under way.”

The Daily Express endlessly reports on the chilling prospect on WW3. Googling “world war 3 latest news” (on co.uk) and the first 50 stories – all bar two, are written by this one national paper. Its latest prediction of death-to-us-all is 2018 – by publishing preposterous predictions made by NOSTRADAMUS several hundred years ago.  “Predictions for 2018 have foretold one of the worst years in global history with a string of natural disasters, the fall of the economy, and the start of World War 3.” It opines like many other MSM outlets that “World War 3 news has become current again. That’s because most people are ignoring the fact that Russia and the United States have resumed a level of tension not seen since almost 30 years ago. Instead of diffusing it, Senators and congressional representatives in Washington are fuelling the risks.”

To be fair – that last bit about Senators seems to be on the button (no pun intended).

CNN took the opportunity to put another twist on the outbreak of WW3 with dire predictions quoted from Elon Musk’s tweets: “Competition for AI superiority at national level most likely cause of WW3 imo,” Musk said in a tweet, using the Internet short-hand for “in my opinion.” In another reply on Twitter, Musk speculated that an AI system could choose to start a war “if it decides that a preemptive strike is most probable path to victory.

The infamous hacktivist group Anonymous has released a chilling new video — urging people across the globe to “prepare” for World War 3 — as the US and North Korea continue to move “strategic pieces into place” for battle.

The New York Post quotes the hacktervist group Anonymous and posts its six minute video of the inevitable coming global conflict complete with scary signature Guy Fawkes character and robotic voiceover. They say warnings made by Japan and South Korea about imminent nuclear attacks from the North — as they deliver their frightening prophecy thus: “Watch as each country moves strategic pieces into place, – but unlike past world wars, although there will be ground troops, the battle is likely to be fierce, brutal and quick. It will also be globally devastating, both on environmental and economical levels.”

The Washington Post reminds us just a few weeks ago that “the Atomic Scientists advanced the symbolic Doomsday Clock a notch closer to the end of humanity, moving it ahead by 30 seconds after what the organisation called a “grim assessment” of the state of geopolitical affairs.”

“As of today,” Bulletin president Rachel Bronson told reporters, “it is two minutes to midnight” — as close as the world has ever been to the hour of apocalypse. In moving the clock forward, the group cited “the failure of President Trump and other world leaders to deal with looming threats of nuclear war and climate change.”

The organisation — which has 15 Nobel laureates on its board — now believes “the world is not only more dangerous now than it was a year ago; it is as threatening as it has been since World War II.”

These 15 Nobel winners have calculated that at 2 minutes to midnight of a 24 hour clock, that the chance of human extinction is 99.8 per cent. They seem pretty certain don’t they?

Nowhere across the spectrum of Think Tanks, national newspapers, magazines and commentators can you find those voices attempting to avert a human catastrophe with the exception of some online petitions and forums.

So how well has the mainstream media done in convincing everyone in the democratic west that global annihilation in on course within our lifetime?

Debatewise.org asks this very same question with depressing results. 78 per cent of respondents said that WW3 is inevitable – just 22 per cent arguing otherwise.

Debate.org brings back even worse results with a 91 per cent thumbs up for WW3

A YouGov survey of 9,000 people across nine countries found popular opinion thinks world peace has rarely been further away.

“World War Three is just around the corner and the planet is teetering on the brink of all-out conflict – according to people in major Western nations.”

Some 64 per cent of Americans think the world is close to a major war, compared to just 15 who think world peace is likely. Britons are only slightly more hopeful: 19 per cent believe peace is possible but 61 per cent say a global conflict is a distinct possibility.

The same survey revealed people in Europe and America tended to see Russia as a major military threat, with British people the most fearful of Moscow.

Anthony Wells, YouGov’s director of political and social research, said: “Fear seems the highest in the US and France, but for different reasons.”

Fear – that’s the word. For citizens across the Western world, our governments are instilling a deliberate strategy of fear.  The result is that we are losing individual freedoms to an increasingly oppressive modern society and dictated to by paranoid so-called world leaders.

The iconography of today is a total loss of trust, frightening technology, mass surveillance, environmental destruction, ecological collapse and global conflict. Is this the best we can do?

As George Orwell once said: “War against a foreign country only happens when the moneyed classes think they are going to profit from it.”

That’s a hint of what’s really going on, nothing here is new!