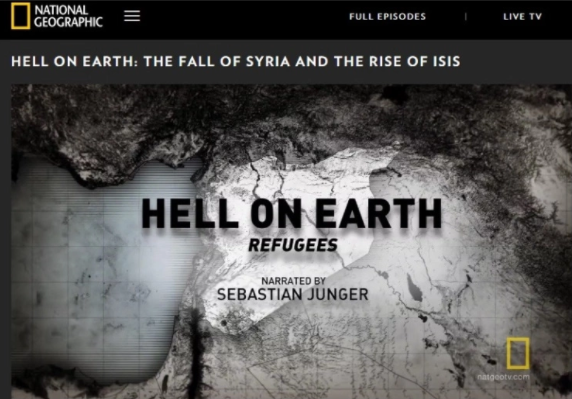 By Paul Larudee: On April 5, 2017, National Geographic released a preview of its film, Hell on Earth: The Fall Of Syria And The Rise of ISIS, by filmmaker Sebastian Junger and producing partner Nick Quested:

The film itself debuted on April 26, 2017, at the Tribeca Film Festival in New York and on the National Geographic channel on June 11.  Junger and Quested persuaded NG to release the preview early, following the suspected chemical attacks in Syria on April 4.

There are, unfortunately, several problems with the footage in both the preview and the film, as well as with the claims made by the filmmakers and National Geographic.  The most glaring of these is that the opening scene of the trailer is a total fraud.

The scene shows a missile destroying a residential building with a thunderous explosion.  Imposed over the footage are the words, ALEPPO, SYRIA.  The clear implication is that the missile is part of a Russian or Syrian Air Force attack in the battle for Aleppo.

But how would the videographer have known where to position the camera in preparation for such an attack?  Surprisingly, there is a logical answer to this question, because there are in fact circumstances where victims are told in advance the location and time of a missile strike.

A ball of fire rises after an Israeli air strike in Gaza City, in the northern Gaza Strip, Aug. 23, 2014. Quite often preceded with a phone call or ‘roof tap’ giving some time to escape

Such a location is Gaza, and the time is when Israeli soldiers call the inhabitants of a house by phone and tell them to get out in 15 minutes or be blown up. That is enough time for a neighbor to film the event, and in fact it has been done on multiple occasions in Gaza, such as here, here, here, here, here and here.

But in Aleppo, Syria? Who would call in advance? In this case, the explanation is rather different, i.e. that the footage is not from Aleppo at all, but in fact from Gaza and only labeled as Aleppo.  The original source footage comes from 2014, and is from the Israeli operation that took more than 2,200 Palestinian lives that summer, long before the Russians started providing air support for the Syrian army:

The use of this footage in the National Geographic preview, falsely labeling the location as Aleppo and implicating the Syrian or Russian Air Force in the destruction, is therefore a shameless and utter fraud.

The second discrepancy is that, according to the filmmakers, the footage in the preview is from the feature film.  That may have been true on April 5, when the public had not yet seen the full film, but at some point, someone must have brought the fraudulent footage to the attention of National Geographic, so that they could replace it with a new opening footage.  When did this happen?  Was it before the debut on April 26, or later?  It would be good to know.

But the reaction of the filmmakers is disappointing in the extreme.  When faced with proof positive that their film contained a blatant fraud, did no one question the extent to which the entire film might be filled with fraud? Anyone who would so obviously falsify would hardly limit it to a single segment.  The footage was clearly chosen for its effect, not its accuracy, and its quiet removal is more a cover-up than a correction.

To what extent, for example, are the rescue portions of the preview and film, featuring the White Helmets, also fraud?  Respected US Marine intelligence officer and UN weapons inspector Scott Ritter is convinced that the White Helmets are incompetent in rescue operations, and that their videos are fabrications.  Recognized documentary filmmaker John Pilger has called them a “complete propaganda construct”.  On occasion, the White Helmets have even been forced to admit the same.

To what extent is the featured family merely acting out the events portrayed and not actually living them?  To what extent is it all contrived?  These are questions that deserve investigation.  More important, how true is the reality that the film tries to portray, whether simulated or not (although if simulated, the filmmakers should say so for the sake of their own integrity, rather than pretending it is genuine)?

The fact is that although half the Syrian population has been displaced by war, the majority have never left Syria. When displaced, they have almost invariably left the areas taken over by “rebels” in order to seek refuge in government controlled areas.  Why?  Is it because the Syrian government, i.e. the “despised” Bashar al-Assad – despite the disastrous economy and in cooperation with Syrian civil organizations – is somehow housing, feeding, clothing, educating and providing health care to these Syrian citizens?  In fact, the United Nations High Commission on Refugees reports that, with the Syrian government reasserting its authority in recovered areas of the country, more than 440,000 displaced persons have returned to their homes.

The film also fails to mention that thousands of “rebel” fighters have laid down their arms, accepted Syrian government amnesty and been allowed to return to their homes.  It further omits that the US and its allies could have stopped ISIS by merely denying them funding and arms.  Russia was the one that largely put an end to the trafficking of stolen Syrian oil, by bombing the massive convoys of trucks across the Turkish border.  No mention of that in the film.  The US has avoided serious actions against ISIS and al-Qaeda, and treated them as useful hit men in order to destroy the Syrian military.  This made us enablers of the terrorists rather than their eliminators.

As for the filmmakers, the New Yorker reports that “[they] couldn’t get into Syria, so …[the film] was shot by Middle Eastern news outfits, and by activists, witnesses, and citizen journalists.” This is reflected in the credits, which include the Aleppo Media Center, Daryaa [sic] Media Center, Halab News Network and Sham News.  These are all affiliates of the White Helmets, which in turn is the front organization for the al-Qaeda affiliate in Syria, variously called Jabhat al-Nusra, Jabha Fateh al-Sham and Hayat Tahrir al-Sham.  Their lavish funding comes from France, the UK, the US, Qatar and other countries.  There is no evidence that any of the footage has been authenticated by the filmmakers themselves, and every reason to think that it has not.

It’s not that the film is totally inaccurate or that it does not do a service by revealing the suffering of refugees.  It does.  But it also perpetuates the worst western myths about the war, which are feeding a continuation of the suffering and the conflict.  The US and its allies are the prime cause of the conflict, not the solution.  US policy makers see the destruction of Syria as a positive thing, much as they do Iraq and Libya, and US efforts are directed toward destruction and control, not toward resolution and reconciliation.

If the filmmakers were honest, they would take the evidence of fraud as a sign that they need to review all the footage in the film that they have not authenticated and over which they have not exercised control.  Otherwise, they run the risk of being labeled as propagandists and permanently damaging or ruining their credibility as documentary filmmakers.

Paul Larudee is a former Fulbright-Hays lecturer and US government advisor in the Middle East, a co-founder of the Syria Solidarity Movement®, a major figure in the pro-Palestinian movement and the International Solidarity Movement.”