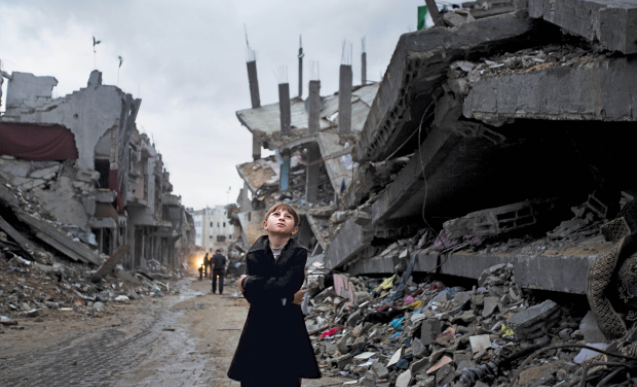 By Jonathan Cook: The announcement of an Egypt-brokered reconciliation agreement between Fatah and Hamas on Thursday raised hopes that a decade of bitter feuding between the rival Palestinian factions may finally come to an end. The early conclusion of the talks in Cairo hinted at how much pressure both sides were under to make progress.

Palestinian President Mahmoud Abbas hailed what he called a “declaration of the end to division”. He is expected to visit Gaza within the next month, for the first time since Hamas ousted Fatah from the enclave in 2007.

However, the two sides reached only a partial agreement, addressing civil and administrative matters. Far more contentious issues – such as national elections, reform of the Palestine Liberation Organization (PLO) and the status of Hamas’ armed wing – were set aside for consideration at the next meeting in late November.

Ghassan Khatib, a former Palestinian Authority (PA) minister, said that after previous failed reconciliation efforts, the chances of success had been improved because both factions had accepted “a step-by-step approach”.

Most importantly, agreement was reached on allowing security forces under Abbas’ control to oversee the Rafah crossing between Gaza and Egypt. Egypt has promised to end its closure of the crossing, allowing goods and people to pass through and alleviating the enclave’s humanitarian crisis.

Gaza’s police force will be rebuilt to include 3,000 PA officers, and Hamas officials in Gaza are to be integrated into PA ministries. The sanctions imposed by Abbas since the spring to tightly limit the entry of fuel, cutting Gaza’s electricity supplies to a few hours a day, will end.

“The price of this kind of reconciliation-lite is affordable, even for Israel,” Khatib told Al Jazeera. “As long as reconciliation deals only with humanitarian and environmental problems, and with the provision of services and the salaries of employees, it can succeed. But the moment it addresses major security and political matters, it will fail.”

Egypt’s role has proved crucial. Mouin Rabbani, a Palestinian analyst based in Jordan, said Cairo had exploited the humanitarian crisis in Gaza as leverage to resolve its own security concerns in Sinai. “Egypt wanted to deprive ISIS of the benefits of a safe haven in Gaza,” he told Al Jazeera.

In addition, Cairo feared that, if the crisis continued, it might lead to another round of fighting between Israel and Hamas, leaving Palestinians clamouring for entry into Sinai to escape the devastation. That risked shining a spotlight on Egyptian complicity with Israel in sustaining the siege of Gaza through its closure of the Rafah border crossing.

The US administration is reported to be eager to see the talks succeed too, as a way to sideline Hamas and improve the chances for President Donald Trump to sell his long-promised “ultimate” deal for peace. That is the one straw that Abbas, pursuing his diplomatic campaign for statehood, can still clutch at.

“Reconciliation is something everyone wants now,” Khatib said. “Abbas wants to extend his jurisdiction to Gaza. Hamas wants to be rid of the burden of the day-to-day governance of Gaza. The international donors want to be able to direct money into Gaza again.

“Even Israel has an interest in a solution to Gaza’s humanitarian problems. After all, Gaza’s untreated sewage ends up on Israeli beaches, too.”

But the wider issues of reconciliation are likely to prove harder to resolve.

Hundreds of PA officials from the occupied West Bank arrived in Gaza last week to start setting up a national consensus government.

This administration of technocrats is intended as a temporary measure until Palestinian elections can be arranged and a representative government installed. The issue of elections is expected to be dealt with in the next round of talks.

But it is hard to see how national elections can be conducted. It was Hamas’ upset election victory 11 years ago that led to a civil war with Fatah that cemented Gaza’s effective political and territorial separation from the West Bank.

Polls indicate that Abbas or any of his likely successors would lose the presidential election to Hamas leader Ismail Haniya. In addition, Fatah would suffer in Gaza, where its vote would be weakened by support for Mohammed Dahlan, Abbas’ rival who has been exiled to the United Arab Emirates. With the help of Egypt, Dahlan has been pumping Gulf money into Gaza to build his support base and challenge Abbas.

Abbas’ best hope may be that Hamas agrees not to contest the presidential election, as a way to avoid the responsibility of running Gaza again

Or, more likely, said Khatib, long-overdue elections will be deferred, and the current government of unelected technocrats allowed to continue in office.

Equally divisive is the question of whether or how to integrate Hamas into the institutions of the PLO. Hamas has in the past insisted that in return for sharing the governance of Gaza with Fatah, it expects to have a stake in a reformed PLO.

But including Hamas would be certain to undermine Abbas’ diplomatic strategy of seeking Palestinian statehood, Khatib said. Israel and the international community would be likely to withdraw their recognition of the PLO as the “sole legitimate representative of the Palestinian people”.

“The danger is that each side knows reconciliation is doomed and is waiting this out in the hope that developments will provide them with an opportunity to blame the other side for failure,” Rabbani said.

Another major hurdle is finding an arrangement for Hamas’ 25,000-strong security forces in Gaza. Abbas has said he expects Hamas’ military wing to be subordinate to the PA security services in Ramallah. In an interview with Egyptian TV last week, he called for “one state, one regime, one law and one weapon”.

Further, the Trump administration may insist on this provision. A statement last week from Jason Greenblatt, the White House’s envoy to the region, said the unity government would have to “explicitly commit to nonviolence”.

However, disarmament or limitations on Hamas’ military wing would almost certainly be a deal-breaker, especially given the PA’s long-standing “security coordination” with Israel.

Hamas has spent years building a sophisticated network of tunnels under Gaza that it believes were the key to its success in withstanding the onslaught from Israel in the 2014 war. It is difficult to imagine it giving up either the tunnels or its weapons.

Hamas’ popularity also depends on its commitment, sanctioned by international law, to armed resistance. To concede control over its military wing would be to strip the movement of its raison d’etre.

Nonetheless, there may be a path out of this apparent deadlock.

In response to Abbas’ statements, Haniya told Egyptian TV that, while the movement would never cede what he called “weapons of the resistance”, it would agree to joint decisions with Fatah about when and how they would be used.

Egypt is reported to have proposed the creation of a joint security council in Gaza. Its representatives would be split evenly between Hamas and Fatah, and consensus needed to sanction armed actions.

Crucially, Egypt would have oversight of the council, effectively giving it a casting vote if the two Palestinian factions could not agree.

A former Palestinian government minister, who wished not to be named, told Al Jazeera he expected Egyptian intelligence officials to directly supervise Gaza’s security forces. That would allow Cairo to monitor more closely connections between Salafist groups in Gaza and those in Sinai, which have been waging an insurgency against the Egyptian army.

But it is not clear whether Abbas will agree to relinquish his powers as supreme commander of the Palestinian security forces.

Rabbani warned against ignoring “the elephant in the room”: Israel.

Palestinian and Egyptian sources reported that an Israeli delegation touched down in Cairo for a few hours on Tuesday, as the talks between Hamas and Fatah began.

If those reports are right, it confirms how vital Egypt considers Israel’s cooperation if reconciliation is to hold.

The last unity government, established in summer 2014, was short-lived. Israeli Prime Minister Benjamin Netanyahu denounced it from the outset as a “vote for terror”.

Weeks later, after three Jewish youths were kidnapped and killed in the occupied West Bank, Israel stepped up attacks on Gaza, culminating in a war that killed more than 1,500 civilians in the enclave. The fighting sounded the death knell for the unity government.

There are fears that Israel might try to engineer another confrontation to sabotage the reconciliation process.

“Statements from [Defence Minister Avigdor] Lieberman are that Israel is preparing for another war with [the Lebanese faction] Hezbollah,” said Rabbani. “But he has said that such a war can’t be contained to the northern border – it will include Hamas too.”

Gershon Baskin, a director of the Israel-Palestine Centre for Research and Information and one of the few Israelis to have regular contact with the Hamas leadership, said Netanyahu would be on the lookout for opportunities to damage the unity government.

“For sure, he is keen to create disruptions,” he told Al Jazeera. “He prefers that the West Bank and Gaza stay divided so that there is no pressure on him to negotiate. He can then say Abbas does not represent all Palestinians or have control over all Palestinian territory.”

But Baskin also believes Netanyahu will be reluctant to make his opposition to the deal too explicit.

He noted that the Israeli army is also warning that the humanitarian crisis in Gaza risks triggering a new round of fighting with Hamas that would be better avoided.

Netanyahu will also not want to be seen to be openly defying the White House when Trump has publicly stated that he wants a regional peace framework in which Egypt is likely to play a key role.

Trump, it was recently reported, told Antonio Guterres, the UN secretary-general, at a meeting last month that he considered Netanyahu the bigger obstacle to a peace deal.

And Netanyahu is likely to be wary of sabotaging too directly the handiwork of Abdel Fattah el-Sisi when the Egyptian president clearly regards Palestinian reconciliation as a pressing security interest for Egypt.

But Netanyahu will do his best to subvert the unity government by stealth, said Baskin.

Even before the reconciliation agreement was announced, Netanyahu had called on the unity government to disband Hamas’ military wing and for Hamas to cut its ties to Iran – conditions designed to strain Hamas-Fatah ties.

This week, in a reminder of how quickly a confrontation could escalate, Israel attacked Gaza to punish Hamas after a Salafist group fired a rocket into Israel after the arrest by Hamas of several of its members.