Paul Larudee: How I became an anti-Semite without hating Jews 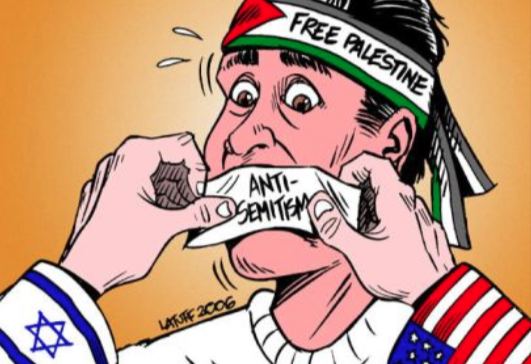 Paul Larudee is a former Fulbright-Hays lecturer and US government advisor in the Middle East, a co-founder of the Syria Solidarity Movement, a major figure in the pro-Palestinian movement and the International Solidarity Movement.” Larudee is a co-founder of the Free Palestine Movement, which achieved official recognition by the United Nations in 2011.

“Because you’re an anti-Semite!” said Kei in a room full of Palestine supporters, looking me straight in the face.

Kei was a member of Students for Justice in Palestine at George Washington University in Washington, DC. He had just finished delivering a talk on the Nakba – “catastrophe” in Arabic – to a meeting of the Party for Socialism and Liberation. It was a good presentation, and clearly he and the other presenter had spent significant time putting it together.

To all appearances, Kei and I saw eye to eye on the issue of Palestine, and should have been on the same side. And that is how we first became acquainted. I was the logistical member of a team bringing two Palestinian women from the refugee camps in Lebanon to speak to students and other groups in North America. Kei’s SJP group at GWU had invited the women to speak at their campus, and Kei was my contact for working out the details.

But then, all of a sudden, he and his group disappeared and we had no response from them. They had decided not to communicate with us anymore, not even to let us know that they had cancelled the invitation. And then there was Kei at the PSL meeting, where I had come at the suggestion of a friend. Having never met him in person, I didn’t realize who he was until he was in the middle of his presentation.

So I asked for an explanation of the GWU incident, and he responded, “Because you’re an anti-Semite.”

“Really!” I replied. “Is it because I hate Jews or have made anti-Semitic statements?”

“It’s because you defend Alison Weir.”

I was astonished.  The definition of anti-Semitism had apparently been growing exponentially when I wasn’t watching.  It is of course true that Israel and its supporters had been expanding the definition to include criticism of Israel and support for BDS (the movement to boycott, divest from and sanction Israel for its violations of international law).

“But how is that anti-Semitic?” I asked.

“Because she’s an anti-Semite.” He replied.

“OK, then how is she an anti-Semite?”

“Because she appeared on an anti-Semitic white supremacist show”.

“I’ve known Alison a long time and I’ve never known her to say anything racist towards Jews or anyone else. What did she say or do?”

“She appeared on a racist show.”

That’s pretty much where the discussion ended. But it’s clear that my defence of Alison Weir was not the reason Kei considered me an anti-Semite. There are thousands who defend her that are not being called anti-Semites. And Alison and I are both proud to count many anti-Zionist Jews among our friends and supporters. (I also count Zionist Jews among my friends, but we just can’t talk about Israel.)

No, the reason for labelling me, Alison and others as anti-Semitic has more to do with the arbiters of who gets invited, i.e. the use of power and ostracism as tools for sowing division.

Kei was not tempted to change his view toward me but had he been, he would almost certainly have found himself ostracized by his own group at George Washington University. That’s a very powerful weapon for those able to wield it.

It doesn’t take much. A couple of rumours and slanderous postings online, aimed against the targets and backed by a few community leaders, are often enough to create a rift in the movement. Those who want to be accepted and who might aspire to future leadership roles will quickly toss a few corpses along the way as sacrificial offerings to prove their sincerity. Such motivations are typically much stronger than principles.

What can we learn from this experience?  That support for those who have been ostracized is not a recommended course of conduct, unless you are motivated more by integrity than legitimacy, in which case you too may become an anti-Semite without hating Jews.