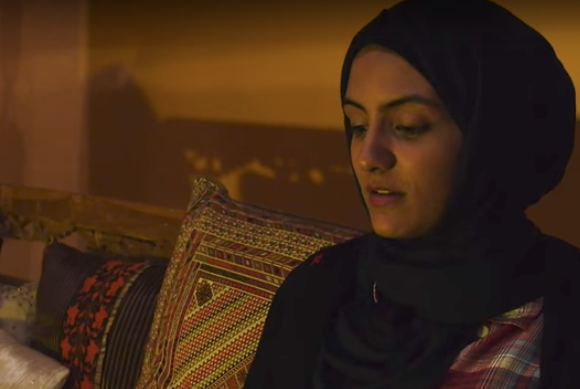 By Amena Elashkar – If you work for justice in Palestine, why won’t you let Palestinians speak?

Until I came to the US last year, I had never met an Israeli, and only one American Jew. As a third generation Palestinian refugee living in a camp in Lebanon, such opportunities did not exist.

Then, when 85-year-old Mariam Fathalla and I came last year to speak throughout the US and Canada about the views of our community in Lebanon, I suddenly met lots of Jews, and a few Israelis, as well. In fact, it was often Jewish Voice for Peace groups that invited us or were among the co-sponsors of our events, as part of the North America Nakba Tour. This year I am touring with 84-year-old Khawla Hammad. Mariam and Khawla are both survivors of the 1948 Nakba (Palestinian genocide). We are all stateless, without any form of citizenship.

We were also invited by a roughly equal number of Students for Justice in Palestine (SJP) groups on many campuses. Everywhere we went, our presentation was enthusiastically received and our message welcomed. We were so pleased that it was such a success, and we made so many friends and allies (even a border officer we met re-entering the US from Canada last weekend).

But some refused to hear us, and we didn’t expect otherwise. The US is known for having some of the strongest Zionist groups and defenders of “Israel”, so we didn’t really expect to go unchallenged. That’s all right. They will spread their message and challenge ours, and we will do the same to them.

What surprised us, however, was that some of the groups calling themselves “Students for Justice in Palestine” would also challenge us. The first was at Stanford University last year, where they expressed a concern that Alison Weir had come with us to hear our talk, and where I was told that I should not say that “Israel” has no right to exist (which is not part of our presentation, but which is a view held by millions of Palestinians).

This earned us a reputation as “anti-Semites” in some circles, despite the fact that no one has shown anything anti-Semitic in any of our presentations. Some groups also object to statements made by some of the people in our organizing committee, composed of Al-Awda Palestine Right to Return Coalition, the International Solidarity Movement – Northern California and the Free Palestine Movement. But no one has produced any anti-Semitic statements from any of these groups, either. Most recently, we were informed by the SJP group at George Washington University in Washington, DC that our Oct. 19 talk would be cancelled because we were “anti-Semitic”.

Of course, we expect such talk from our Zionist enemies, and we give it little importance. But to hear it from a group that claims to be standing for justice in Palestine? Do these groups really expect to have any credibility among Palestinians when they do this?

We have heard from some of them (including Stanford) that they are under tremendous pressure, and we don’t doubt that this is true. But why isn’t their first priority to defend and promote the voices of Palestinians speaking for themselves? Why don’t they stand up to whatever pressure is being placed upon them, even if they lose allies and are not recognized as a campus group? Do they think they are pursuing justice by allowing themselves to be intimidated? Don’t they care for their integrity?

Of course, we realize that many of these groups actually have plenty of integrity. In fact, last year, immediately after the terrible experience at Stanford, SJP-Pitzer welcomed us with open arms. The same is true of 72 other groups that sponsored or co-sponsored us last year, including other SJP and JVP chapters.

What we’re saying is that it’s a disgrace for a group calling itself “Students for Justice in Palestine” to cancel one of our events or to allow itself to be pressured by groups or individuals that clearly do not stand for justice in Palestine and who have appointed themselves gatekeepers of what Palestinians may or may not say about their own genocide or anything else.

As a Palestinian, I request such groups to stop using “Justice in Palestine” in their name. We Palestinians understand what justice does and does not mean, and we do not give you permission to use our name or the name of our country for your corrupted image of justice.

Amena Elashkar is a stateless 23-year-old Palestinian translator and journalist living in the Bourj el-Barajneh refugee camp in Lebanon. Watch the interview on YouTube HERE