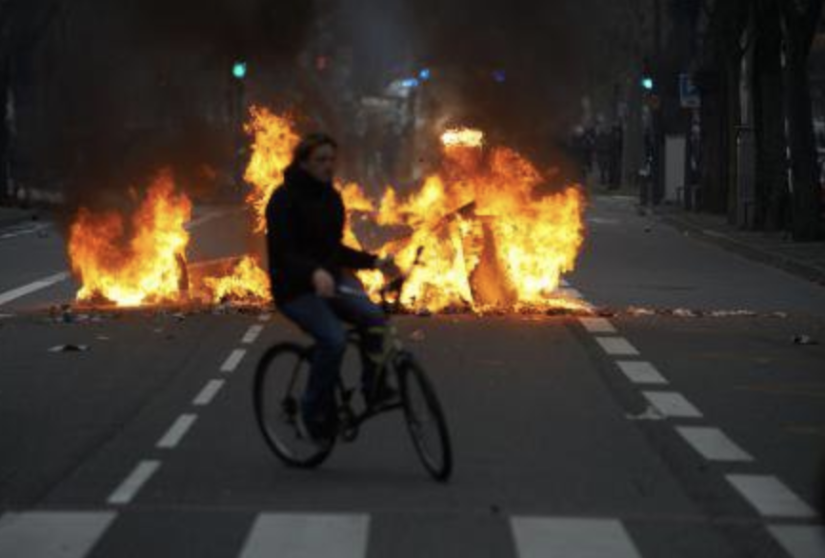 By Dr Clodagh Harris and Ian Hughes:  The Covid-19 pandemic has spawned a rash of articles speculating about how our world will change in the aftermath of the virus. Indian author and political activist Arundhati Roy has described the pandemic as a portal, an opportunity for humanity collectively to break with the past, leaving our ‘dead ideas, our dead rivers and smoky skies behind us’ and imagine the world anew.

Vietnamese-American author Viet Thanh Nguyen writes that ‘Americans will eventually emerge from isolation and take stock of the fallen, both the people and the ideas that did not make it through the crisis.’ One of the ideas that he predicts will not survive is the idea of the US as an economic, political or cultural role model for the world’s democracies.

William Hynes, Head of the New Approaches to Economic Challenges (NAEC) at the OECD, has remarked that if the 2008 Financial Crisis provided us with an x-ray of the fractures in our financial system, the Covid-19 pandemic is providing us with a three-dimensional CT scan that is revealing the systemic weaknesses of our societies.

While the pandemic is the most immediate threat to our wellbeing, both individually and collectively, contemporary societies are also undergoing a whole series of other crises. Climate change, environmental degradation and a biodiversity crisis, marked increases in inequality, economic calamities, the rise of populism, rising geo-political tensions, the effects of increased globalisation, and ongoing religious and ethnic conflicts, including the Black Lives Matter protests in the US, provide the backdrop against which the Covid-19 pandemic has erupted. This coincidence of crises marks our era as one of profound change and uncertainty, an era that Johan Schot, Professor of Global History and Sustainability Transitions at Utrecht University, has called an era of deep transition.

One feature of this era, which was apparent before the pandemic but which has now been brought into even starker relief, is that a whole range of current social institutions upon which we depend are not optimal, either for human flourishing or for addressing global challenges. A wide range of institutions, including democracy, economics, religion, gender, technology and higher education, are showing signs of acute stress or outright failure.

One important source to which we can turn to see what might lie ahead at times of deep uncertainty is Plato’s Republic. Its central argument is that history is not linear and progressive, but is instead characterised by periodic degenerations, recurrences and reversals, which can culminate in fundamental transformations of entire social institutions and societies.

This coincidence of crises marks our era as one of profound change and uncertainty, an era of deep transition.

In Republic, Plato outlines how Aristocracy (leadership by wise kings) degenerates and transforms into Timocracy (heroic military leadership), which in turn transitions into Oligarchy (leadership by family descendants, and other wealthy elites associated with the military heroes).  In turn, Oligarchy grows increasingly corrupt and is eventually overthrown by democratic revolution. During periods of acute crisis, however, the democratic masses become susceptible to electing charismatic, ‘strongman’ leaders who, Plato warns, soon become tyrants who overthrow democracy and establish tyranny. In this ever-changing environment, Plato cautions, the dominance of particular forms of toxicity, if not constrained, can steer the transformation in a direction that can be catastrophic to the public good. Plato’s warning of the deep transition from democracy to tyranny has critical contemporary relevance.

We contend that at this dangerous historical moment we need to urgently heed Plato’s warning and re-imagine our social institutions so that they can better contain sources of toxicity and instead empower progressive change if impending catastrophes are to be faced and avoided.

Such re-imagining is particularly pressing for the social institution of democracy. For almost half a century now, a minimalist view has dominated in which democracy has been defined narrowly in terms of elections, the rule of law and protection of individual freedoms (usually civil and political freedoms). Broader views, which understand democracy as based on participation and deliberation among citizens, which incorporate human rights protections, collective bargaining power for workers, and shared sovereignty between nations to address shared challenges, have increasingly been rejected. As Wendy Brown has highlighted, the very idea of democratic society itself has been weakened.

According to Brown, society in a democracy is where citizens of vastly unequal backgrounds and resources are brought together, where citizens are politically enfranchised, and where differences and inequalities are made manifest and potentially resolved. The existence of society, however, is precisely what neoliberalism set out to destroy – as illustrated by Margaret Thatcher’s assertion that ‘there is no such thing as society’. The claim ‘society does not exist’ has permitted ‘freedom’ to be exercised without concern for the social consequences or the common good. It has released citizens from any connection to social conscience, compromise or concern for the social fabric that holds society together.

Neoliberalism’s sustained attack on society has been central in generating a progressively undemocratic and anti-democratic citizenry, ever more willing to authorise an increasingly antidemocratic state, as we are observing in the rise of right-wing nationalist populism today.

Weakened societies are vulnerable to toxicity at times of crisis and deep transition, such as the present. While various sources of toxicity can be identified, one that is currently highly visible and commented on is the toxicity that arises from psychological pathology. A long line of psychiatrists and psychologists have been warning of the dangers posed by individuals with certain dangerous personality disorders, including psychopaths, and those with narcissistic personality disorder and paranoid personality disorder, who are psychologically incapable of conceiving of the idea of equality. Individuals with paranoid personality disorder exist in a state of perpetual suspicion and are only able to perceive of other people as a threat. In positions of power, this minority act as a source of extreme toxicity that can steer transitions in directions that are catastrophic for the public good.

From this psychologically informed perspective, democracy can be viewed as comprising a series of defences against dangerous psychopathic leaders. These defences include the rule of law that applies equally to rulers and citizens, free and fair elections at regular intervals that allow for the removal of toxic leaders, human rights protections for individual citizens based in law, social safety nets that protect societies from high levels of deprivation that stoke mass support for demagogues, and shared sovereignty that allows the international community to act in the event of widespread human rights violations by national leaders. Each of these pillars of democracy serve to limit the power of leaders and provide protection for citizens against the excesses of power. In this view, democracy is a system of defences, built up over centuries, to protect societies from a psychologically disordered minority, and from our own worst natures.

Neoliberalism’s sustained attack on society has been central in generating a progressively undemocratic and anti-democratic citizenry, ever more willing to authorise an increasingly antidemocratic state.

The rise of right-wing nationalist populism and the erosion of democracy in formerly stable democracies is clearly showing, however, that these defences have been breached in many places. A strengthening of democracy and a re-imagining of additional democratic defences is therefore urgently needed.

As Brown urges, the development of new practices of society needs to be a central part of this response. The possible forms of such new democratic practices are already discernible. For half a century, deliberative and participatory democratic innovations such as citizen juries, citizens’ assemblies and participatory budgeting have been demonstrating the feasibility of new democratic practices that empower citizens and influence policy. The Citizens’ Assembly, Ireland, the French Convention Citoyenne pour le Climate, and the Climate Assembly, UK, for example, already allow citizen deliberation to shape the climate policies of national governments.

These forums produce considered judgements based on critical and respectful deliberation, informed by scientific evidence and inclusive of diverse citizen opinions and experiences. In this way, they can contribute an additional ‘powerful segment’ of the wider democratic system. As the climate examples also show, they can also contribute to the ‘slow politics’ required to tackle intractable policy challenges that need long term solutions but are impervious to short term electoral cycles.

Democracy’s capacity for critical self-reflection on the part of its citizens, together with its capacity for self-renewal, is what makes it the best defence we have against toxicity and pathology. New spaces for citizens to revisit the meaning of democracy itself in our era of deep transformation is urgently needed to facilitate this. Given the dangerous erosion of democracy in many places, a more holistic model of democracy is required which involves a combination of deliberative, participatory, direct and representative forms of democracy, where each may act to overcome the deficiencies of the other.  Within this ‘vibrant democratic ecology’ there is an urgent need for participatory and deliberative democratic innovations that empower wider and deeper forms of citizen participation.

In response to the toxicity that is threatening to overpower our societies, contemporary democracy urgently needs to empower the forces of progressive change to contain toxic leaders, overcome dangerous polarisation, and collectively create a path to greater sustainability and human development. Democracy’s ability to re-imagine itself, and the success it has in doing so, may be our only hope in developing the ‘slow’ fact, future and other-regarding politics required to tackle the multiple crises we face, and move collectively towards societies that are stronger, fairer, more sustainable – societies in which people can thrive rather than merely struggle to survive.

Ian Hughes is the author of Disordered Minds: How Dangerous Personality Disorders Are Destroying Democracy and contributing author to The Dangerous Case of Donald Trump. He is a Senior Research Fellow at the MaREI Centre at University College Cork in Ireland.