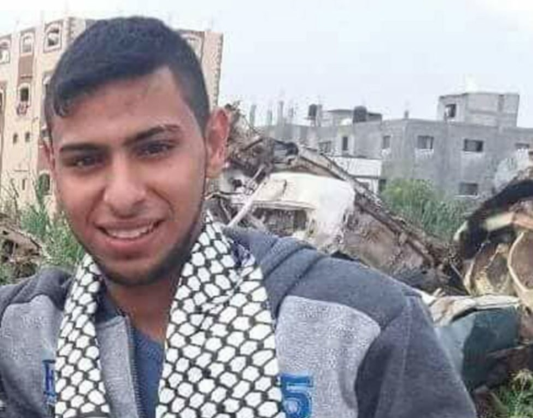 By Jonathan Cook – Nazareth, Israel: Fathi Harb should have had something to live for, not least the imminent arrival of a new baby. But last week the 21-year-old extinguished his life in an inferno of flames in central Gaza.

It is believed to be the first example of a public act of self-immolation in the enclave. Harb doused himself in petrol and set himself alight on a street in Gaza City shortly before dawn prayers during the holy month of Ramadan.

In part, Harb was driven to this terrible act of self-destruction out of despair.

After a savage, decade-long Israeli blockade by land, sea and air, Gaza is like a car running on fumes. The United Nations has repeatedly warned that the enclave will be uninhabitable within a few years.

Over that same decade, Israel has intermittently pounded Gaza into ruins, in line with the Israeli army’s Dahiya doctrine. The goal is to decimate the targeted area, turning life back to the Stone Age so that the population is too preoccupied with making ends meet to care about the struggle for freedom.

Both of these kinds of assault have had a devastating impact on inhabitants’ psychological health.

Harb would have barely remembered a time before Gaza was an open-air prison and one where a 1,000kg Israeli bomb might land near his home.

In an enclave where two-thirds of young men are unemployed, he had no hope of finding work. He could not afford a home for his young family and he was about to have another mouth to feed.

Doubtless, all of this contributed to his decision to burn himself to death.

But self-immolation is more than suicide. That can be done quietly, out of sight, less gruesomely. In fact, figures suggest that suicide rates in Gaza have rocketed in recent years.

But public self-immolation is associated with protest.

A Buddhist monk famously turned himself into a human fireball in Vietnam in 1963 in protest at the persecution of his co-religionists. Tibetans have used self-immolation to highlight Chinese oppression, Indians to decry the caste system, and Poles, Ukrainians and Czechs once used it to protest Soviet rule.

But more likely for Harb, the model was Mohamed Bouazizi, the Tunisian street vendor who set himself on fire in late 2010 after officials humiliated him once too often. His public death triggered a wave of protests across the Middle East that became the Arab Spring.

Bouazizi’s self-immolation suggests its power to set our consciences on fire. It is the ultimate act of individual self-sacrifice, one that is entirely non-violent except to the victim himself, performed altruistically in a greater, collective cause.

Who did Harb hope to speak to with his shocking act?

In part, according to his family, he was angry with the Palestinian leadership. His family was trapped in the unresolved feud between Gaza’s rulers, Hamas, and the Palestinian Authority (PA) in the West Bank. That dispute has led the PA to cut the salaries of its workers in Gaza, including Harb’s father.

But Harb undoubtedly had a larger audience in mind too.

Until a few years ago, Hamas regularly fired rockets out of the enclave in a struggle both to end Israel’s continuing colonisation of Palestinian land and to liberate the people of Gaza from their Israeli-made prison.

But the world rejected the Palestinians’ right to resist violently and condemned Hamas as “terrorists”. Israel’s series of military rampages in Gaza to silence Hamas were meekly criticised in the West as “disproportionate”.

The Palestinians of the West Bank and East Jerusalem, where there is still direct contact with Israeli Jews, usually as settlers or soldiers, watched as Gaza’s armed resistance failed to prick the world’s conscience.

Again, the world sided with Israel. Resistance was not only futile, it was denounced as illegitimate.

Since late March, the struggle for liberation has shifted back to Gaza. Tens of thousands of unarmed Palestinians have massed weekly close to Israel’s fence encaging them.

The protests are intended as confrontational civil disobedience, a cry to the world for help and a reminder that Palestinians are being slowly choked to death.

Israel has responded repeatedly by spraying the demonstrators with live ammunition, seriously wounding many thousands and killing more than 100. Yet again, the world has remained largely impassive.

In fact, worse still, the demonstrators have been cast as Hamas stooges. The United States ambassador to the UN, Nikki Haley, blamed the victims under occupation, saying Israel had a right to “defend its border”, while the British government claimed the protests were “hijacked by terrorists”.

None of this can have passed Harb by.

When Palestinians are told they can “protest peacefully”, western governments mean quietly, in ways that Israel can ignore, in ways that will not trouble consciences or require any action.

In Gaza, the Israeli army is renewing the Dahiya doctrine, this time by shattering thousands of Palestinian bodies rather than infrastructure.

Harb understood only too well the West’s hypocrisy in denying Palestinians any right to meaningfully resist Israel’s campaign of destruction.

The flames that engulfed him were intended also to consume us with guilt and shame. And doubtless more in Gaza will follow his example.

Will Harb be proved right? Can the West be shamed into action?

Or will we continue blaming the victims to excuse our complicity in seven decades of outrages committed against the Palestinian people?