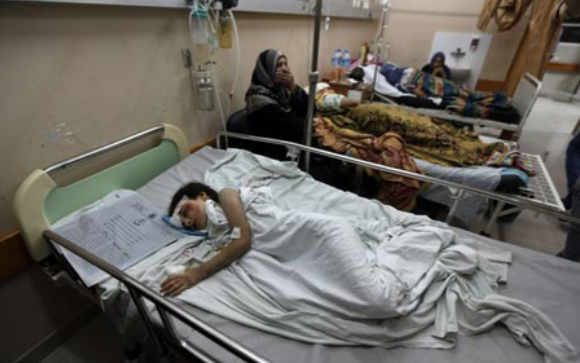 By Global Research: The healthcare system in the Gaza Strip is on the brink of “total collapse” and needs urgent action from the international community if it is to survive its current crises, medical charity Medical Aid for Palestinians (MAP) warned on Tuesday.

The United Nations Office for the Coordinator of Humanitarian Affairs (OCHA) have launched an emergency appeal for funding, warning that Gaza is on the “verge of disaster”, with emergency fuel stocks only able to sustain critical health, water and sanitation services for the next ten days.

Israel’s blockade of the besieged enclave has led to chronic energy and medication shortages, and tightening restrictions on exit permits for Gazans in need of medical care outside of the territory pose critical health risks.

Power shortages have been further exacerbated by electricity cuts imposed by the Palestinian Authority in June 2017. The charity reported that 19 health centres in the enclave have been forced to close as they could no longer run their emergency generators. Such generators have been the only means of getting electric power for more than four hours a day, which has become the norm for Gazan households.

Closures have included key Ministry of Health-run health facilities such as Beit Hanoun Hospital, Al Durra Hospital and Gaza’s main mental health hospital, with many more on the brink of shutting if the current situation continues.

NGO-run hospitals in north Gaza are now under strain as they cope with increased demand.

OCHA estimated that a minimum of $6.5 million is needed in 2018 to provide enough emergency fuel to prevent services from collapsing, and highlighted intensive care units, operating theatres, as well as MRI, CT and x-ray diagnostic services, as being at particular risk.

Medical services in Gaza have also been blighted by severe shortages of medication and basic equipment. The World Health Organisation (WHO) reported that in January, 40 percent of all essential drugs were entirely depleted, including medications used in emergency departments. There is also less than one month’s supply available of 26 percent of medical disposables such as syringes and wound dressings, according to MAP.

Rates of permit approvals by Israeli authorities for Palestinian patients needing to exit for medical care outside Gaza reached their lowest levels last year since records began in 2006.

In total only 54.5 percent of permits to exit Gaza for appointments in the West Bank, including East Jerusalem, or abroad were approved, with no signs of loosening in 2018.

“I am in regular contact with MAP’s permanent team in Gaza, and it is clear from them that the situation is exceptionally dire right now.

“Diminishing resources in Gaza are affecting all services, including critical ones, with Gaza’s youngest and most vulnerable residents perhaps most at risk. MAP works directly with the NICU in al-Shifa hospital, where even before the current crisis services were already dangerously stretched by increasing rates of low-birthweight and premature babies,” Dr Andy Ferguson said.
“Now, the status of these babies is exceptionally precarious, and the WHO has identified 113 new-born babies in neonatal intensive care units whose lives are directly threatened by fuel shortages. What is more, there is a general fear among people in Gaza that they are heading for another conflict.”

Dr Andy Ferguson added that Gaza’s health system “simply does not have the resources to cope with any sudden influx of casualties from a military assault like we saw in 2014.”

“MAP’s projects, vital and life-saving as they are, can only go so far – concerted action from the international community is vital to not just saving lives now, but also opening up Gaza so the health system can properly and sustainably develop.”

“The rapid collapse of Gaza’s health system is a man-made crisis, and could be reversed though international humanitarian funding and political action to bring a decade-long closure to an end. Failure to act is inexcusable, and will lead to entirely avoidable loss of life.”

MAP has urged the international community and the UK government to provide urgent funding to alleviate the ongoing humanitarian crisis, as well as sustainable long-term solutions to bring the Gaza siege to an end.