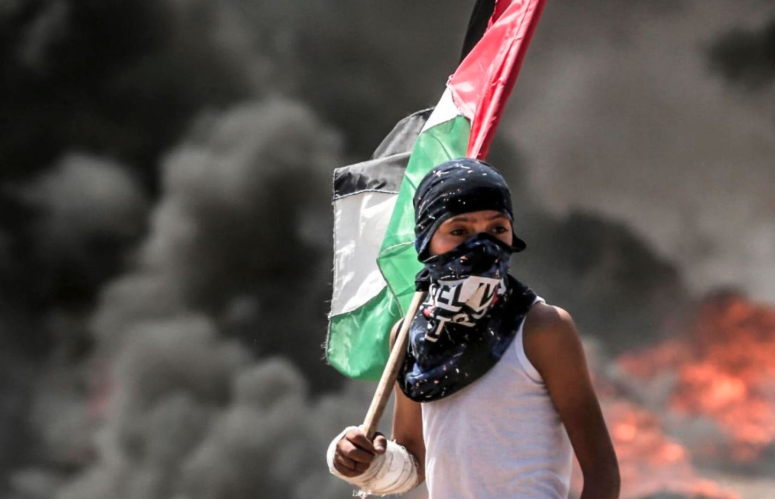 An indignant Times of Israel reports that: “After 29-2 vote, with US and Australia opposed, Israel rejects council’s ‘hypocritical’ and  ‘absurd’ attempt to undermine its right to self-defence and dismisses probe as a ‘foregone conclusion.'”

The UN council voted through the resolution with 29 in favour and two opposed, while a further 14 states, Britain included, abstained. The resolution also condemned “the disproportionate and indiscriminate use of force by the Israeli occupying forces against Palestinian civilians”.

The council will be asked to produce a final report next March.

Commenting on the UK’s abstention from the vote, the London-based anti-poverty charity War on Want told The Independent: “It’s disgraceful that the UK has abstained from a UN Human Rights Council vote for a Commission of Inquiry into Israel’s killing of unarmed Palestinians in Gaza.”

Israeli security forces killed more than 60 Palestinians and injured another 2,400 on Monday during protests at the Gaza Strip over the US Embassy move to Jerusalem, according to the Gaza Health Ministry. It was the bloodiest day in Gaza since the 2014 war with Israel.

In front of the world’s media, in plain sight, is the killing of Palestinian’s who, armed with little more than rocks and stones were murdered by professionally trained snipers. Not a single Israeli in any of these so-called clashes has been injured, let alone killed.

The age demographic of the 60 Palestinians gunned down by Israel Defence Force soldiers is as follows:

The youngest was Eight-month-old Laila. A further 27 were really just children, boys and very young men. This group made up more than 50 percent of the total killed – just angry youngsters.

VoxPolitical reported that there were political consequences emerging in their report: “Huge backlash against supporters of Israeli government over Gaza Massacre.” “Organisations that have offered unreserved support for the murder of dozens of people – and the indiscriminate injury of thousands more – have taken a verbal pummelling from the general public.” Taking the brunt of the backlash has been the Board of Deputies of British Jews, whose hasty announcement claiming that Hamas held the responsibility for the Israeli Defence Force’s decision to gun down defenceless people – some of whom were more than 300m from the fence they claimed to be protecting – has rightly been targeted for vitriol.”

Prior to that, the Whitehouse press briefing last Monday in response to the killings was, at best, bizarre – and only added fuel to the fire of that backlash. It went like this – a reporter asked deputy press secretary Raj Shah whether the United States was calling on Israel to “use restraint in dealing with these protests.”

Shah: “We believe that Hamas is responsible for these tragic deaths, that their rather cynical exploitation of the situation is what’s leading to these deaths, and we want them to stop.”

The reporter asked again, “So there’s no burden on Israel to do something to sort of rein it in?”

Shah: “No. We think that we shouldn’t lose sight of the fact that Hamas is the one that, frankly, bear [sic] responsibility for the dire situation right now in Gaza.”

Another reporter asked a similar question: “So there’s no responsibility beyond that on the Israeli authorities — kill at will?”

Shah: “We believe Hamas, as an organization, is engaged in cynical action that’s leading to these deaths. This is a gruesome and unfortunate propaganda attempt,” Shah said, noting that Secretary of State Mike Pompeo agrees that “Israel has the right to self-defence.”

One should ask quite what does ‘self-defence’ mean in Israel. And as Vox goes on to say: “the Trump administration is outright echoing the most extreme far-right Israeli government talking points that all of this is Hamas’s fault and is absolving the Israeli government of any responsibility whatsoever for the massive number of dead and injured Palestinians.”

Initially, the UN investigation into what one could easily interpret as state-sponsored assassinations of a minority was blocked by the USA, but as there was “little evidence” that Israel made any effort to minimise casualties during Monday’s protests by Palestinians, as mentioned by UN’s top human rights official a war-crimes investigation into these killing has been voted upon.