Unemployment in USA now exceeds that of 1933 Great Depression 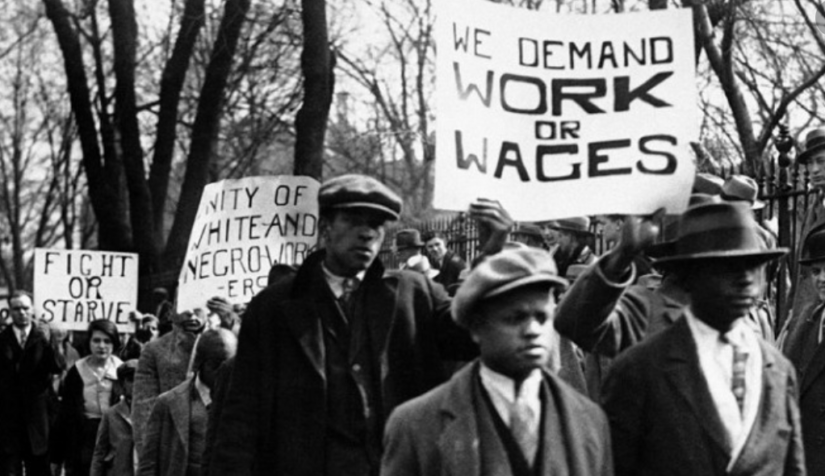 By TruePublica: As most people will know, the Great Depression was a severe worldwide economic depression that took place mostly during the 1930s, beginning in the United States. The timing of the Great Depression varied across the world; in most countries, it started in 1929 and lasted until the late 1930s. It was the longest, deepest, and most widespread depression of the 20th century. The Great Depression is commonly used as an example of how intensely and quickly the global economy can decline.

The Covid-19 pandemic has already beaten all records as a comparison for the Great Depression on the way down and it remains to be seen how it recovers – and all predictions of a ‘V’ shaped return to late 2019 levels of business have already been replaced with a date ranging around 2023 before that realistically happens.

Between 1929 and 1932, it is recorded that worldwide gross domestic product (GDP) fell by an astonishing 15%. International trade fell by more than 50% and the combined negative effects led to unemployment in the USA to rise sharply. There were similar devastating effects in both rich and poor countries across the world.

In 1933, the population of the USA was 125.6 million. At the height of the Great Depression, some 15 million American workers were formally unemployed and about half the banks had failed. This unemployment rate equates to just under 12 per cent (there are various other reports to state the real rate of unemployment was higher and reached around 25 per cent at its very peak).

Today, the population of America is approximately 330 million. The Covid pandemic has savaged the American economy and within weeks well over 40 million American workers have lost their jobs and being paid by the state to survive. How many will get back to their original employers is unknown – how many will be fully laid off is also unknown. But right now, around 13.5 per cent (latest data from US unemployment support states it is 14.4 per cent) of American workers are formally unemployed. MarketWatch reports that – “the economic impact payment only covers between 60% and 71% of the estimated monthly budget for a family of four. The stimulus payment will cover 50% or more of one month’s estimated expenses in just 34 of the top 98 metro areas.” Debt.org reports that – “the typical American household now carries an average debt (all debt) of $137,063.” You can see where this is going.

To that extent – Covid-19 has already reached two new records. The first is the speed of the decline. In 1933, the Dow Jones Industrial Average recorded stock prices in an initial free-fall then a slight recovery followed by a general decline. From July 1929 to August 1930, around 50 per cent of DJ had been wiped out. On February 19th 2020, the DJ Industrial Average sat at 29,312. On March 23rd when the pandemic was in full swing it recorded a low of 19,028, effectively wiping 34 per cent of its value in little over one month. At the time of writing, the index has recovered to 25,383 but only after the US government has injected an eye-watering £3 trillion dollars into the system to prop up the economy.

In 1933, the government attempted various stimulus packages at the beginning of the stock market panic sell-off, aimed at saving the banks from becoming insolvent – which mostly failed. The Library of Congress reports that – “In a country with abundant resources, the largest force of skilled labour, and the most productive industry in the world, many found it hard to understand why the depression had occurred and why it could not be resolved. Moreover, it was difficult for many to understand why people should go hungry in a country possessing huge food surpluses. Blaming Wall Street speculators, bankers, and the Hoover administration, the rumblings of discontent grew mightily in the early 1930s. By 1932, hunger marches and small riots were common throughout the nation.”

The second record is that unemployment in the USA has sky-rocketed in a matter of weeks, not months – and all the indications are there that longer-term unemployment will treble to something like Great depression levels at 12 per cent. The Congressional Budget Office predicts unemployment will continue to rise and by July/August will reach 16 per cent.

We should not forget that the usual explanations apply for the Great Depression, The Great Recession and now the Covid crisis. All were triggered by high consumer debt and ill-regulated markets that permitted overoptimistic loans by banks and investors. All three events quote those characteristics first and foremost. Whether it’s about over-exuberant investors, over-inflated stock markets, housing markets or a virus – these events come to test market resilience. When markets are weak, politicians are weak, regulation is weak, asset values become unsustainable – hence a market crash. Covid-19 is merely the code name for this one.

The big difference between the Great Depression and similar events is that today, government’s raise billions in national debt to stave off a calamitous fall. Time will tell.