US blocks UN call to probe Israeli killings of Palestinians 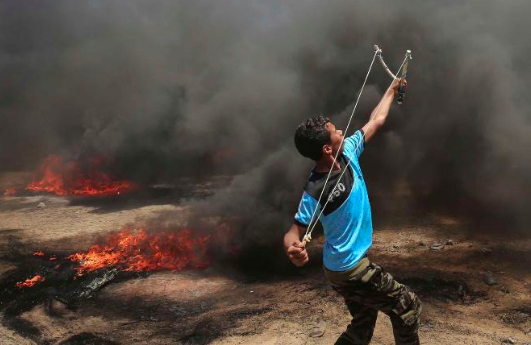 Here’s something you won’t read in the mainstream media or in fact on the United Nations website. A damning UN Security Council draft statement on Israel’s use of force against protesters at the Gaza border was blocked by the US.

Sixty people were killed as the new US Embassy opened in Jerusalem. Thousands are reportedly injured. Even in the United Nations own report, published on its own website, the UN does not make this point. It does, however, allow for considerable space for both America and Israel to defend itself from these disproportionate actions that amount to little more than extra-judicial executions on the streets, which it terms as ‘clashes’ and not the premeditated massacre that it really is. We can call it a massacre because snipers are used in the killings.

“Israel has a responsibility to calibrate its use of force, to not use lethal force, except as a last resort, under imminent threat of death or serious injury,” Mr. Mladenov, UN Special Coordinator for the Middle East Peace Process said. “It must protect its borders from infiltration and terrorism, but it must do so proportionally.”

Not exactly the strongest condemnation of the street killings of youngsters armed with little more than stones and a sling.

Monday was the bloodiest day in six weeks of protesting by Palestinians at Israel’s border wall, during which hundreds of people have been killed and thousands injured by Israeli soldiers. The IDF (Israel Defense Forces) has used tear gas and live fire against demonstrators, saying the use of force is justified due to the threat they pose (behind a fence). Palestinian protesters have burned tires, thrown stones, and launched incendiary kites during the stand-off.

The draft statement, which was blocked by Washington on Monday, expressed outrage over the scale of violence and called for an independent investigation of the situation.

“The Security Council expresses its outrage and sorrow at the killing of Palestinian civilians exercising their right to peaceful protest,” the document, circulated by Kuwait and cited by AFP and Haaretz, reads. “The Security Council calls for an independent and transparent investigation into these actions to ensure accountability.”

The draft statement was to be in response to the killing of 59 Palestinian protesters, including seven youths, some under the age of 15, who were shot by Israeli soldiers on the day the US Embassy opened for business in Jerusalem. More than 2,700 activists were injured in Gaza, the Palestinian Health Ministry said.

The United nations website reports that: “During the ensuing debate at the UN, Nikki Haley, US Ambassador to the UN, said that violence was widespread not just in Gaza but across the Middle East, and in defence of Israel said that “the double standard is all too common in this chamber, and working overtime today.”

Also addressing the Council, Riyad Mansour, Permanent Observer for the State of Palestine, described Monday’s events as an “odious massacre”, and Israel’s occupation of Palestinian land as the main source of tension.

Back in Britain, at an emergency debate, called by Shadow Foreign Secretary Emily Thornberry, which saw Britain’s top diplomat Boris Johnson flee the Commons as it was starting, Jeremy Corbyn said that Western governments such as the UK could “not turn a blind eye to such wanton disregard for international law”.

In a direct attack on Theresa May’s government, the Labour leader, who has been a constant supporter of the Palestinian people since entering Parliament, said: “The response from many Western governments to this flagrant illegality, including our own – which bears a particular responsibility for a peaceful and just resolution of the Israel-Palestine conflict – has been wholly inadequate.”

He went on to recommend that the Government learn from the work undertaken by Israeli peace campaigners who have consistently demanded the end of human and political rights abuses committed by Israel on Palestinians.