The Political Assault On Britain’s Democracy 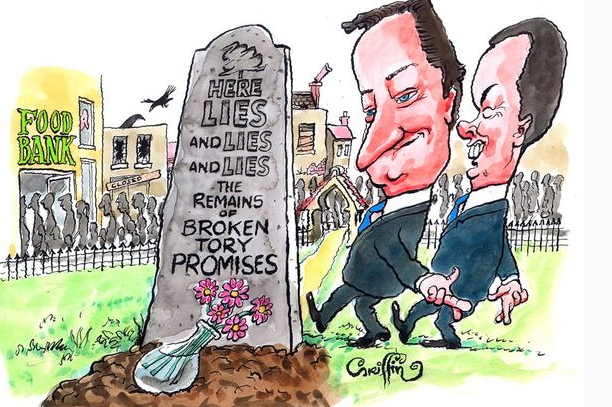 By Graham Vanbergen: It should be natural for Members of Parliament to support representative democracy above everything – they are, after all, supposed to embody it and serve the people they represent. It has become clear though, it is not in their personal interests to do so. So they don’t.

Take for instance, The Justice and Security Act that expanded ‘Closed Material Proceedings‘ or secret courts, or the proposed abolition of the Human Rights Act, the 2016 Trade Union Act, or the Investigatory Powers Act. This type of legislation is assaulting fundamental rights that were hard fought for by previous generations.  Civil society earned those freedoms and protections and politicians are taking them away without permission.

The Digital Economy Act and updating of the Public Order Act gives sweeping powers to the police such as shutting down our mobile phones, even if we have committed no offence or crime and arresting journalists at protests. Facial recognition systems are being used to store data about everyone without any public or parliamentary debate. Again, civil society gave no permission for these egregious acts of sedition against the will of the people.

An example of a lack of democratic representation is that 84 percent of the population want the NHS to be completely state funded i.e. no privatisation at all. A further 68, 67 and 66 percent believe that energy, royal mail and railways respectively, should all be managed by the state, not by private, for profit companies, many of whom aren’t even British entities. If 51.9 to 48.1 percent of citizens gave a mandate for the government to withdraw from the European Union, with ‘Brexit means Brexit,’ then politicians are being more than disingenuous to the principles of democracy when it comes to the privatisation drive that will see £100billion of state assets sold under this government alone by 2020. They have no mandate for that at all. There has been no democratic debate on the subject of selling Britain’s assets to the friends of a political class.

Whilst it is true that democracy can be interpreted in different ways, the generally accepted view in Britain is that one person will speak on our behalf from the geographical area voted in. But as a rule they don’t. I have maintained for some time now that the sad consequence for modern Britain, is that we have a guided or managed democracy and post Brexit, this will be positively dangerous for the majority, not the few.

A guided (or managed) democracy is, by definition either a de facto autocracy or an oligarchy. Governments are legitimised by what appears to be free and fair state elections but the people’s will ends with a frustrating lack of being able to change state policies, no matter who they vote for. The government control elections in order that the people can exercise their rights without actually or meaningfully changing public policy. Under guided democracies the use of propaganda, misinformation and disinformation campaigns are rife. These often take the form of ‘fear factor’ tactics that we saw so much of in the Scottish and EU referendums and last general election. The emergence of ‘fake news’ within the establishment media becomes the new normal. These are the outstanding hallmarks of a guided democracy.

Princeton University professor Sheldon Wolin describes this process as inverted totalitarianism, which he defines as the political coming of age of corporate power and the political demobilization of the citizenry. In other words an oligarchy.

Chris Hedges, the Pulitzer prize winning American journalist agrees and states that democracy in America is nothing more than a fiction. Hedges goes one step further. He says that “corporate forces carried out a coup d’état in slow motion. The coup is over. We lost.”

Wolin and Hedges agree that this comes about when enormous sums of corporate money is used to influence political outcomes. “The central point that emerges from our research is that economic elites and organised groups representing business interest groups have substantial independent impact on government policy, while mass based interest groups and average citizens have little or no independent influence” – says Wolin.

Wolin goes on to say that the same Princeton University study also described the United States as a de facto oligarchy. Again, by default, I say again, that our guided (or managed) democracy is, by definition becoming the same as Wolin’s America. This is what Britain is turning into today.  As Matt Taibbi famously once said of American banking corporations: “The world’s most powerful investment bank is a great vampire squid wrapped around the face of humanity relentlessly jamming its blood funnel into anything that smells like money.” They and the rest of these corporations see Britain as yet another target to suck dry.

Another hallmark of a guided democracy is that political manifesto’s are no more than pamphlets of propaganda. The speeches that support by political puppets are simply a game of deception.

One only has to look at David Cameron’s last election win. He promised to the electorate that child tax credit would be protected, to turn the North into a ‘powerhouse’, dramatically increase affordable housing and to make government more transparent, amongst many other ‘pledges’. All of these promises were lies. Indeed, government became less transparent whilst privacy for the masses has dissolved under recent legislation. There was even a bid to end the Freedom of Information Act, which thankfully failed due to citizen outrage.

Who could forget the “NHS is safe in our hands” – an appalling democratic betrayal and Theresa May’s woeful “dementia tax’ fiasco – both dishonest strategies that the citizenry saw right through. In the meantime, whilst citizens are distracted, the Conservatives continue to auction off to the most predatory bidders the very state funded functions that actually contribute to society.

The reality is that the West is in crisis. The ideologies of the corporatocracy promoted by an egotistical and self-serving political class caused this crisis. Trickle down economics has failed, neoliberal capitalism has failed, globalisation has failed, austerity has failed. Society and the institutions that supports it is breaking down as a result. This is evidenced by the reactionary forces now causing an alarming rise of nationalism, protectionism and isolationism – all leading to conflict from within as a wedge is driven into society at large.

Far from solving ‘broken Britain’, the Conservatives have fundamentally attacked civic society since the rise of Thatcher. Those ideologies – trickle down economic theory, extreme capitalism and globalised markets are all the invention of an elite of that era.

Thatcher’s ‘Women’s Own’ interview in September 1987 after her third electoral victory ended with those famous words – “there is no such thing as society” which was promoted in The Times the following year. ‘Individualism,’ an American construct by the rich and powerful is the ideology that has led us to where we find ourselves now. This corrosive ideology is nothing more than a social theory that favours freedom of action for individuals over collective or state control. That’s fine if you don’t want national taxpayer funded education, health or welfare for the vulnerable. But Britain does, and whilst the American’s have a poor experience of their infrastructure functionality due to the inexorable rise of the for-profit model, we in Britain have had a different experience because of social democracy. To all intents and purposes, Briton’s like the promotion of social justice within the framework of a functioning capitalist economy. It’s the the middle ground.

But this has changed with privatisation, the universal reality is rocketing prices, lower safety and standards. All this sold to us under the guise of freedom of choice.

It’s also fine if your version of freedom allows you to abandon your responsibility to society – such as paying taxes. Society itself cannot, and does not want to make this escape. It is dependent on the reasonable goodwill of society to pay for all these important functions we so depend upon.

George Monbiot encapsulated all this in a recent article published at TruePublica: “Freedom is used as the excuse for ripping down public protections on behalf of the very rich. When think tanks and the billionaire press call for freedom, they are careful not to specify whose freedoms they mean. Freedom for some, they suggest, means freedom for all. When corporations free themselves from trade unions, they curtail the freedoms of their workers. When the very rich free themselves from tax, other people suffer through failing public services. When financiers are free to design exotic financial instruments, the rest of us pay for the crises they cause.

In truth, Britain’s democracy is being dismantled by parasitical politicians who have proven to be hopeless at holding to account the elites and the corporations who now preside over us. This politically generated crisis, our guided democracy is pushing Britain and the West towards dramatic changes as a direct result of their failures. Perhaps something new will arrive and sweep away our ancient and decrepit system, one which is chronically misgoverned by the morally baron.

The answer, no doubt comes from civil society itself. The workable big ideas don’t come from ministers but from the pressure civil society applies. As Civil Society Futures says “Manifesto ideas, from all parties, are lifted cleanly from the reports of voluntary groups.  And politicians will get the benefit of making these ideas real.”

It’s important to remember though, politics doesn’t just happen in parliament. Civil society and voluntary groups, civil liberty and human rights organisations, pressure groups and (some) Think Tanks all contribute to providing the public with a direct, national voice on the issues they genuinely care about. Constituency representatives can be forced to listen if we shout loud enough.

It really is important to get involved before it’s too late.