£4.5 trillion of Britain’s wealth has been sucked up by over-financialisation in 20 years 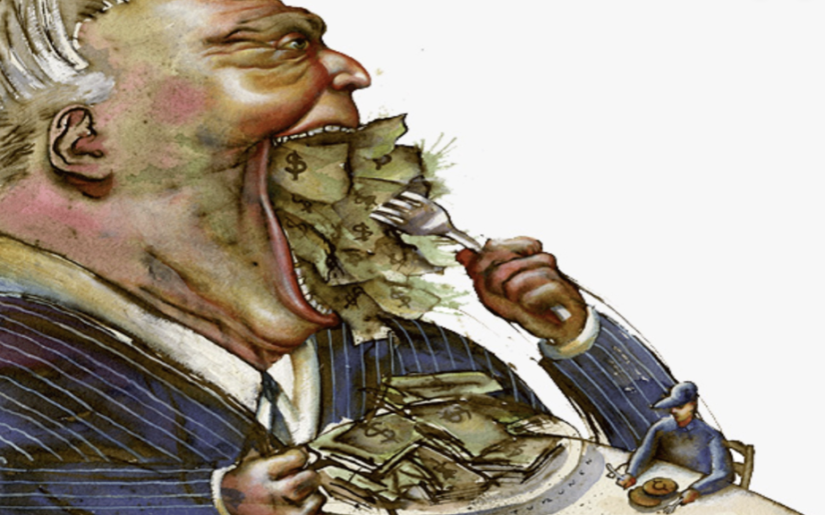 By TruePublica Editor: In our article – The Real Brexit Plan – The Singapore Scenario, we highlighted what Brexit was really about. Brexit is really about money – a financial tool that has never been sold as being good for the general public in terms of welfare or wellbeing. Therefore, if Britain does decide to take Boris Johnson’s Brexit route in next months general election, deregulation expectations would see more, not less financialisation in the economy. At this point, I thought it would be a good time to remind everyone exactly what financialising everything costs us all. By financialising, I mean the cost of funding life in general – housing, education, utilities, transport and so on.

This time last year, the Sheffield Political Economy Research Institute (SPERI)  published its groundbreaking report entitled  The UK’s Finance Curse? Costs and Processes. It brought into the light some remarkable findings and those findings have not been countered by the City of London. The conclusion to their extensive research suggests that the total cost of lost growth potential for the UK caused by ‘too much finance’ between 1995 and 2015 is in the region of £4.5 trillion. This total figure amounts to roughly 2.5 years of the average GDP across the period. Currently, the UK produces £2.1 trillion in annual GDP.

It is not until we break that figure down into our own world experience that the sum absorbed by over-financialising the economy and depriving it of growth is really understood. And it is astonishing. Over the same 20 year period, the NHS could have been funded at more than double every single year. Or – it is equal to £3,750 for each man, woman and child every year for 20 years. The average monthly rent in the UK is currently about £912 per household. This amount of money would easily pay the rent for a property big enough for a household of four for a year.

Over the same 20 year period, the NHS could have been funded at more than double every single year. Or – it is equal to £3,750 for each man, woman and child every year for 20 years.

Even worse, the reports also stated that – “If we add an additional category of excess rent to these calculations as a wider distributional cost with potential negative social implications, the costs rise to £5,180 billion, or 3 years of GDP averaged across the 20 year period.”

And if we thought the United States was over financialised, the report also stated – “This data suggests the negative costs of too much finance might be two to three times higher for the UK than for the US.” In other words – the financial industry is far more aggressive in the UK and is literally draining society of its livelihood.

The data also suggests that the UK economy will have performed much better in overall growth terms if: “its financial sector was smaller and if finance was more focused on supporting other areas of the economy, rather than trying to act as a source of wealth generation or extraction in its own right.”

This evidence also provides support for the idea that the UK suffers from a form of ‘finance curse’: a development trajectory of financial overdependence involving a crowding out of other sectors and a skewing of social relations, geography and politics.

This evidence also provides support for the idea that the UK suffers from a form of ‘finance curse’: a development trajectory of financial overdependence involving a crowding out of other sectors and a skewing of social relations, geography and politics.

The report provided the first-ever numerical estimate for the scale of damage caused by the UK’s finance sector growing beyond a useful size. Of the £4,500 billion loss in economic output, £2,700 billion is accounted for by the misallocation of resources where resources, skills and investments are diverted away from more productive non-financial activities into finance. The other £1,800 billion arises from the 2008 banking crisis. For all of the nonsense you read about in the press that the banks have repaid or partially repaid for the 2008 crisis, just remember, the actual cost to the country was not £500 billion – it was nearly four times that.

Professor Andrew Baker said: “The ‘too much finance’ problem has been identified in previous studies. For the UK, the numbers are powerful and hint at a deep underlying problem of misallocation, and ‘crowding out.’  UK economic strategy in a post-Brexit world needs to make addressing this the central challenge, recognising that where finance is concerned, more can sometimes be less, and less could be more.”

The authors of the report call for a focused and systematic interdisciplinary research agenda using the finance curse framing to further dig behind the numbers presented in the report. They argue that the report’s findings and ideas should mark the start of a process of more carefully debating and considering the potential social and economic costs of excessive finance in the UK and should be of both interest to researchers and of concern to policymakers.

The problem is – politics is infected and poisoned with money from banks, hedge funds, the rich and all manner of dark money is now coursing through the veins of British politics and it is hard to see how things will change.

You can Download: The UK’s Finance Curse? Costs and Processes