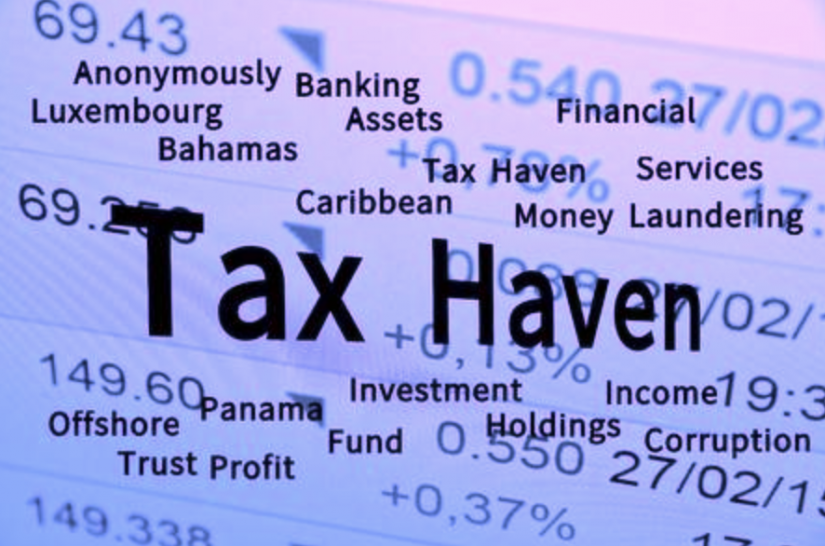 Bloomberg News – August 2nd: Boris Johnson Widens Push for Singapore-Style Free Ports in the UK.  Boris Johnson’s government is expanding plans to create 10 free ports in the U.K., which he says will boost the post-Brexit economy.

Singapore Online 25th July – “despite the possible negative effects of a no-deal Brexit, there could be opportunities, such as Singapore seeing some “safe-haven flows from any ensuing flight to quality”, or people moving money to safer investments.”

The headlines of a post-no-deal Brexit world to some paint a picture of promised sunny uplands. It will be. For some.

Charles Woolfson is Professor emeritus at the Institute for Research on Migration, Ethnicity and Society (REMESO), Linköping University, Sweden. Since arriving in Sweden in 2009 after a decade of residency in the Baltic states, he has written on East-West migration from the newer EU member states, and on the impacts of radical austerity programmes in the Baltics following the crash of 2008.

Woolson wrote an article in the London School of Economics that the plan to turn Britain into some sort of Singapore, itself one of the worst performers in the world for inequality and worker exploitation, is merely a ‘race to the bottom’ to the significant detriment of existing standards.

In Johnson’s eyes and those of fellow ardent free-marketeers, a ‘Singapore scenario’ would be achieved by an ultra-business-friendly environment with low or zero corporation tax, low wages, weak trade unions, vestigial welfare provisions and a significant temporary migrant ‘non-citizen’ workforce (around 30 per cent of the total workforce), largely without the protection of national labour laws or access to welfare provisions.

Yet, as the Prime Minister of Singapore pointed out, the transposition of a Singaporean model to the UK is not so simple. Currently, the UK government spending on the public sector accounts for 40 to 45 per cent of the GDP, while for the Singaporean government it accounts for a mere 16 to 17 per cent of the GDP (Bloomberg News, 2018). Furthermore, the Singaporean economy, while ranking second in the World Bank index of 190 countries in terms of ‘ease of doing business’ (pro-business regulation), is also accompanied by powerful regulatory social controls and an extensive system of government patronage (Trading Economics, 2019).

Social inequalities in Singapore are rising. A recent review of 157 countries in terms of commitment to reducing inequalities ranked Singapore overall at 149, among the 10 worst performers, and at 157 in terms of redistributive progressivity of tax policies (Development Finance International and Oxfam Report, 2018). Noting a decline in ranking since the previous year, the report concludes, ‘On labour, it (Singapore) has no equal pay or non-discrimination laws for women; its laws on both rape and sexual harassment are inadequate; and there is no minimum wage, except for cleaners and security guards’. As a prescription for a post-Brexit labour market, a ‘Singapore scenario’ leaves a lot to be desired.

None of this has dampened enthusiasm for turning Britain, free of European regulation, into some kind utopian free-market paradise. Johnson’s trademark rhetoric has consistently excoriated the EU for ‘trussing the nations together in a gigantic and ever-tightening cat’s cradle of red tape’. It was exemplified by Johnson’s theatrical appearance before the cheering Conservative Party faithful on the final leadership election hustings. Brandishing of all things, a kipper, Johnson claimed (incorrectly, as it happens) that ‘Brussels bureaucrats’ required that each kipper sent through the mail be accompanied by a coolant bag, an unnecessary and ludicrous burden on business.

There are echoes in Johnson’s buffoonery with the 1980s satirical BBC TV series, ‘Yes, Minister’. A 1984 Christmas special edition depicted an incompetent and opportunistic James Hacker as Minister heading the Department of Administrative Affairs, reluctant to sign a Xmas card to a Brussels Commissioner (one rather French-sounding ‘Maureece’ by name). In contention was a proposed Brussels directive to standardize the ‘EuroSausage’ and re-designate the ‘Great British Sausage’ as an unappetising ‘emulsified high-fat offal tube’. In the same election hustings speech, Johnson proclaimed, kipper to hand, ‘And when we come out, therefore, we will not only be able to take back control of our regulatory framework and end this damaging regulatory overkill but we will also be able to do things to boost Britain’s economy, which leads the world in so many sectors’ (New Statesman, 2019).

Hostility to EU regulation is merely a surrogate target for hostility to regulation in general, seen as holding back burgeoning British free enterprise. To realise full ‘regulatory divergence’ from EU controls (the glittering prize of a no-deal Brexit), Johnson has now proposed the creation of free economic zones or free ports, offering lower import taxes and customs tariffs, favourable manufacturing locations, and looser regulation to lure investment in up to 10 ports around the country. These free ports will be situated mainly in declining and ‘left-behind’ areas such as Teeside. Such zones are not specifically precluded by EU regulations, although it is true to say that they are regarded by the Commission as potential havens for counterfeiting goods and money laundering. In fact, over 80 exist within the EU, the majority in the newer member states of Eastern Europe. Besides providing free-enterprise zones where capitalism can be let loose to do what it does best, their attractiveness for employers is that they are typically insulated from employment protection and minimum wage legislation, while collective bargaining and trade union representation are generally non-existent. Free ports are ‘the Singapore scenario made real’ in the UK context. They will be the forward positions in a greater national project of wholesale deregulation accompanied by comprehensive labour subordination, UK-apore as one big free port.

Ironic, therefore, is the announcement by Brexit-supporting Sir James Dyson, one of Britain’s most celebrated entrepreneurs of the relocation of his corporate headquarters from England to Singapore. This comes only a few months after a previously announced ongoing UK investment programme, much welcomed by Theresa May, and portrayed as a sign of business confidence in Britain’s post-Brexit future. For Dyson, the business logic is presumably compelling. While preserving his UK sites, the company already has manufacturing and new R&D facilities in Singapore, in part following a previous relocation from the UK. The Singapore investment is proximate to profitable East Asian markets for his luxury products, not to mention providing a suitable base for Dyson’s new plan to develop electrical automotives. Not least, however, the move to Singapore potentially offers zero corporation tax. A further incentive is access to labour markets in the East Asia region providing both compliant and relatively cheap human resources when compared to the UK. Dyson Ltd presents a paradigmatic example of ‘foot-loose’ capital investment shopping for regulatory regime advantage in a globalised ‘race to the bottom’. As a pointer to the investment potential of a post-Brexit Britain, Dyson’s decision is ominous.

An additional dimension to the post-Brexit competitive challenges facing the UK economy is the fate of existing foreign direct investment. Japan, for example, is a significant investor in the UK. Nissan, Toyota, and Hitachi between them account for 40 billion pounds (nearly half of Japanese direct investment intended for the EU in 2015 and 144,000 UK manufacturing jobs. Japanese business has sought reassurances that the UK will remain in the European customs union and single market, a demand that is profound anathema to Johnson.

In or out of the single market and customs union, the fact is that the EU is itself remoulding the global trade and investment environment through an extensive series of Economic Partnership Agreements (EPAs), several of which it was hoped would be with potential trading partners for the new ‘Global Britain’. Recent among these is the EU-Japan Economic Partnership Agreement (EPA) of 2017. This will remove nearly all significant tariff barriers to trade. While the UK has already one of the least regulated labour markets in the EU, such agreements place further competitive pressure on a post-Brexit UK to show even greater ‘flexibility’ on labour and other standards. It is pressure to downgrade that will surely intensify as the UK government embarks on the mammoth task of ‘replicating’ forty years of existing European trade deals or tries its unskilled hand at forging new ones. If preliminary exchanges with the US regarding food safety standards in a future trade deal (specifically, the acceptability of chlorine-washed chicken) are anything to go by, the prospects are not enticing.

Theresa May’s successful wooing of Nissan investment in Sunderland may prove to have been only a temporary demonstration of foreign investor confidence in the future of the UK economy. As the Japan Ministry of Foreign Affairs warned, ‘Japanese businesses rely on inexpensive labour from Eastern Europe in the manufacturing and agricultural industries in the UK’.

Labour migration, the toxic driver of the Brexit debate, will present unique challenges to a free-market Johnson government, not least as its internal logic would suggest a more liberal and open regime. Migration, therefore, presents an unresolved contradiction at the heart of the ‘UK-apore’ project. To appease his core supporters it is more than likely that Johnson’s government will be forced, reluctantly or otherwise, to replicate much of the exclusionary path towards continued free movement of labour that informed the policies of his predecessor.

As Central-Eastern European migrants return home, (or refuse to come to the UK for the wages and conditions on offer) both of which increasingly they appear to be doing, UK nationals will need to be ‘persuaded’ to accept those low-paid ‘3D’ (dirty, dangerous, and demeaning) jobs that they had previously rejected. The ‘Singapore scenario’ applied to the UK would mandate a downgrading of current welfare and labour standards in a massive recalibration of labour expectations of the domestic labour force. Such a recalibration would be achieved by a radical shrinking of what remains of the welfare state, combined with a raft of ‘incentives’ to accept whatever jobs are on offer.

Questions of the downside of globalisation are not new but much accentuated by Britain’s current precarious political and economic conjuncture as it departs from the EU. In short, Boris Johnson’s ‘UK-apore’ can only be realised in a ‘race to the bottom’ to the significant detriment of existing standards. If the business model of labour and welfare devaluation in a ‘Singapore scenario’ is the pathway towards Britain’s economic salvation, then such standards now become integral to the democratic politics of post-Brexit Britain.