66,000 UK deaths projected by ‘Institute’ has 95 per cent ‘uncertainty’ value 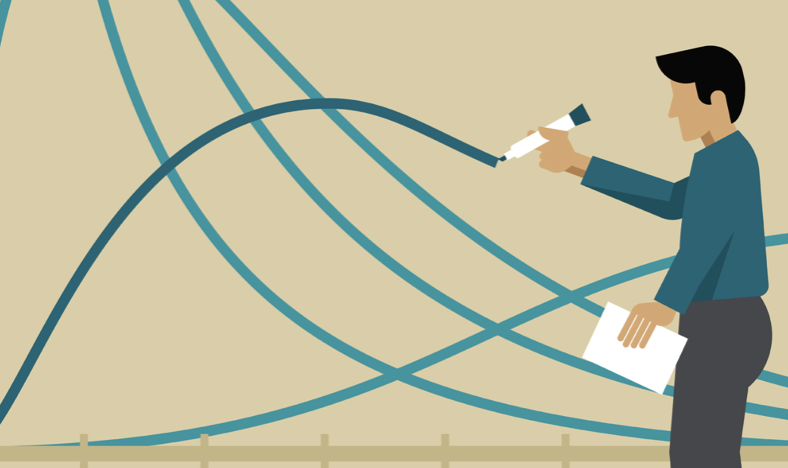 By TruePublica: There are many headlines in a range of national newspapers across the spectrum reporting that Britain could see as many as 66,000 COVID-19 deaths during the first wave of the current pandemic. This is new research published Tuesday (07/04), effectively making the outbreak in Britain by far the deadliest in Europe. In fact, this report states that 43 per cent of all deaths in Europe from COVID-19 will be located in Britain. But does this American report have a hidden agenda?

This is modelling conducted by the Institute for Health Metrics and Evaluation (IHME) at the University of Washington’s School of Medicine. It shows that approximately 151,680 people are likely to die from the virus across the European continent.

While the novel coronavirus emerged in China and was initially focussed in east Asia, the World Health Organisation now says the pandemic is centred in western Europe, with Spain, Italy and France experiencing devastating death tolls.

Most European nations have introduced strict social distancing measures to try to stem the virus spread. In Britain, Boris Johnson’s government initially took a laid back approach to protect the economy, allow a ‘herd immunity’ programme to occur and as Dominic Cummings (now in hiding) said, if a few old people die, so be it. That plan was quickly changed as the media turned against the government.

At the time of writing, more than 6,000 people have died from COVID-19 in Britain, far fewer than in Spain, Italy and France, but Britain’s epidemic lags behind the rest of the continent by several days, and its death toll trajectory is already steeper than other nations. The peak, according to the IHME is due to arrive April 18th to 20th.

Using local and international data on case numbers, as well as age mortality breakdowns from Italy, China and the US, the team at IHME modelled the expected death toll on a country-by-country basis.

It found that Britain could experience 66,000 COVID-19 deaths by July, far more than Italy, the next most severely impacted, with around 20,000. Spain and France were next, with 19,000 and 15,000 predicted deaths, respectively.

“We are expecting a foreboding few weeks for people in many parts of Europe,” said IHME Director Christopher Murray. “It seems likely the number of deaths will exceed our projections for the United States.”

On Sunday the institute predicted just over 80,000 US COVID-19 deaths during the pandemic’s first wave

The modelling suggests that outbreaks in Italy and Spain, where hundreds of deaths have been reported daily for weeks, may be past their peak.

Daily deaths in both countries have declined for several days.

But according to the report, Britain is likely weeks away from getting a handle on its death toll as intensive care capacity is completely overwhelmed.

Peak demand was forecast to see more than 100,000 hospital beds needed versus the 17,765 currently available. It also states that 25,000 ICU beds will be needed with only 799 ICU beds available in Britain.

In looking more deeply into the data provided by IHME there are a number of caveats, the most important of them is the range of ‘uncertainty.’ Without saying anything at all, the Mail Online publishes its click-baiter of the day:

“Britain could be worst coronavirus-hit nation in Europe with 66,000 deaths in the first wave of the outbreak – three times Italy’s expected toll – because of the NHS’s shortage of hospital beds and intensive care capacity, warn scientists”

Conveniently missing in the Mail Online report is the scale of range between actual data and estimated data – this is identified behind a tiny icon called ‘uncertainty.’ 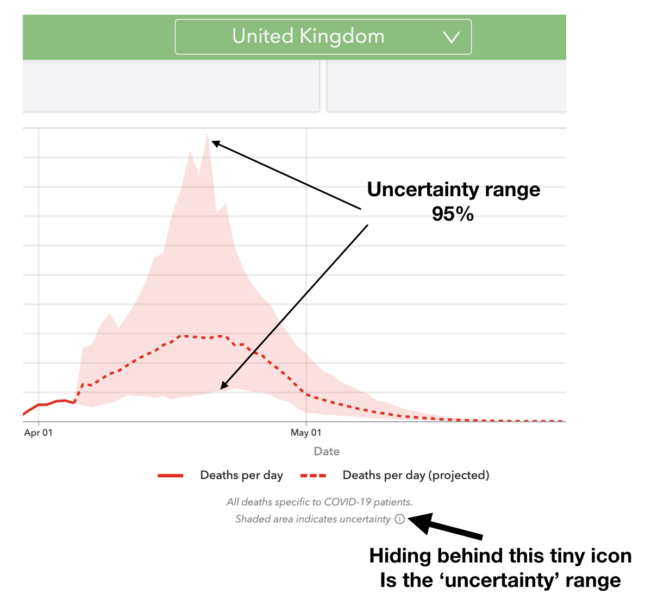 It is nonsense to present data such as this to the British press. Even the FT is running the story. The reality is this study is based on little more than guesswork as all the other scaremongering predictions that have ranged from 500,000 to 20,000 COVID-19 deaths.  It may or may not come true because it is not known.

This report works just like the term ‘statistical significance,’ which relates to results from, say a study, which shows only that something was demonstrated by at least 5 per cent – leaving 95 per cent uncertainty. Statistical significance dates back to the 1700s and has been used over the centuries to come up with all sorts of bogus data, evidence, reports and the like.

In 2016, the American Statistical Association (ASA) published a statement, saying that “the widespread use of ‘statistical significance’ (generally interpreted as ‘p ≤ 0.05’ or 5 per cent) as a license for making a claim of a scientific finding (or implied truth) leads to considerable distortion of the scientific process.”

It is ‘statistically significant’ that just this week Donald Trump’s administration is relying on IHME modelling of deaths in the USA that has magically fallen from predictions of hundreds of thousands to just 84,000 when the USA has five times the population of the UK and a highly fragmented health care system with 27 million American’s having no health care cover at all. So this report probably has nothing at all to do with attempting to put blame on a national health service in Britain that just can’t cope – as negotiations for a trade continue to be hindered due to Britain’s health care service not being available for exploitation – obviously.

We should not forget that seasonal flu in the last five years (to the winter of 2018) in Britain has ranged from 1,600 to 29,000 – statistically speaking that is a range of 94.5 per cent between the best and worst year.