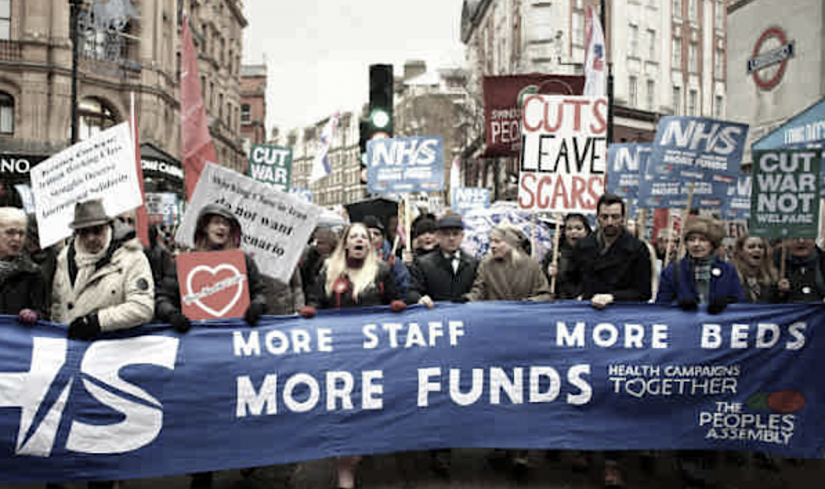 By TruePublica: There is a lot going wrong in the world today and big tech is driving much of it in its indomitable thirst for ever greater global influence and markets to profit from. In the meantime, the British government is already making many moves to ‘Americanise’ society and continues towards its unpopular privatisation model in healthcare. These are not the musings of TruePublica’s editor. Professionals at the heart of the artificial intelligence community, privacy, civil liberty and healthcare are alarmed the NHS has teamed up with certain tech firms with scant care for patient outcomes especially with the latest announcement of American behemoth Amazon giving health advice.

The voice-activated assistant is now automatically searching NHS web pages to find answers to medical questions. And the government is selling it on the hope it will reduce the demand on human doctors. But there is more to this than meets the eye and the move has split opinion among artificial intelligence experts and data ethicists.

“The sensitive data holdings of a national healthcare provider like the NHS are a form of ‘critical social infrastructure’, Yet they’ve been handed to a foreign company that’s both a defence contractor and targeted advertiser.”

“Encouraging the public to give their private health details to one of the most aggressive corporate data guzzlers is astonishingly misguided. Amazon’s Alexa records what people say, stores recordings in data centres we know nothing about, and exploits our data for profit. This scheme will likely result in people being profiled and targeted by data brokers based on their deeply personal health concerns. These home surveillance devices are controversial and not widely used. Any public money spent on this awful plan rather than frontline services would be a breathtaking waste.  Healthcare is made inaccessible when trust and privacy is stripped away, and that’s what this terrible plan would do. It’s a data protection disaster waiting to happen.”

Amazon is known to have major ambitions in the healthcare industry and is now targeting Britain. With the impending UK/US trade deal getting closer every day, Amazon is simply getting its brand name and collecting valuable data in front of what it plans next. A small example of this is that in 2018, Amazon paired up with Omron Healthcare to allow a blood pressure monitor to be controlled via Alexa – and announced its software could automatically analyse electronic health records for information that could be useful to doctors.

It is clear that Amazon is training its algorithms on NHS patients queries.  Data privacy campaigner Phil Booth makes this point exactly with a tweet that asks that question and also “who’ll be responsible for patient safety.” 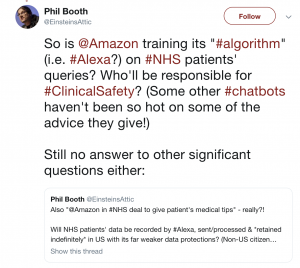 And this new partnership is not really new. The government has form. The NHS has increasingly partnered with private companies to offer access to its services. Notably, Babylon Health, Push Doctor and Now GP all allow video appointments with GPs to be made remotely.

A partnership with the aforementioned healthtech firm Babylon, for example, which offers patient consultations via a smartphone app, has been criticized for gaming the UK’s healthcare system. Doctors say the app mainly attracts young, low-maintenance patients while pushing harder and more expensive cases back to regular GPs.

Following several complaints from doctors, the Medicines and Healthcare products Regulatory Agency (MHRA) has reviewed the Babylon Health app which powers the NHS GP-at-hand service, according to a report in the Financial Times.

According to the paper, the MHRA asked questions about the app after one doctor complained that it had failed to identify symptoms of a heart attack or deep vein thrombosis and other doctors telling the paper that they had complained about wording on the website that could confuse patients. The Advertising Standards Authority has also received five complaints about the app.

Calls for the Conservative government to scrap legislation that has led to the widespread privatisation of healthcare continue across the NHS with strikes over backdoor privatisation schemes that include everything from building facilities management all the way to profiting from cancer scanning and surgery.

HealthTech could, of course, be very beneficial to the healthcare industry but equally be seen as just another privatisation deception, especially when it involves global exploitative corporations such as Amazon.