Austerity – The duel between central banks and politicians – who’s right? 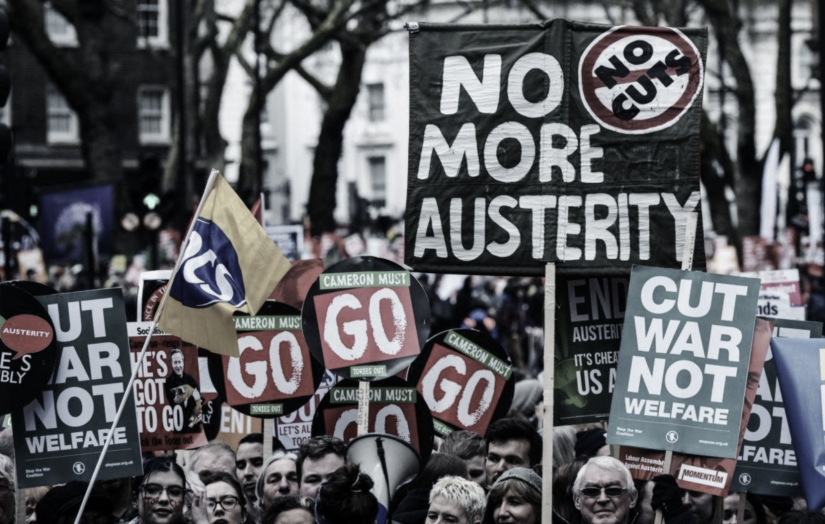 By Simon Wren-Lewis – Emeritus Professor of Economics and Fellow of Merton College, University of Oxford: The UK and the Eurozone are both vulnerable to the next recession, but both politicians and central bankers think each other should deal with it.

I don’t want to talk about the likelihood of a recession in the UK, US or Eurozone. Forecasting is a (necessary) mug’s game, where there are just too many variables to make anything like an accurate prediction. It is worth outlining the risk factors, and Grace Blakeley does an excellent job here. Instead, my concern is the vulnerability in both the UK and the Eurozone to the impact of a recession if it happens. This vulnerability was clearly illustrated by the mistakes made after the Global Financial Crisis, yet in many ways, the lessons of that failure have not been learnt.

Most people know the story of austerity after the Global Financial Crisis (GFC). In the UK the negative impact of the GFC was so severe that even cutting interest rates from around 5% to 0.5% was not sufficient to counteract its impact. As a result, the Labour government in 2009 undertook various fiscal stimulus measures. They, together with lower interest rates, succeeded in stopping the fall in output, but by 2010 the signs of recovery were still fragile. The new Coalition (Conservative and Liberal Democrat) government decided to focus on the rising budget deficit rather than the recovery and undertook a large fiscal contraction in what became known as austerity.

The consequence of UK austerity was the slowest recovery from a recession in centuries. Here is a nice chart from a recent report by James Smith of the Resolution Foundation, which clearly illustrates the extent of the weak recovery. 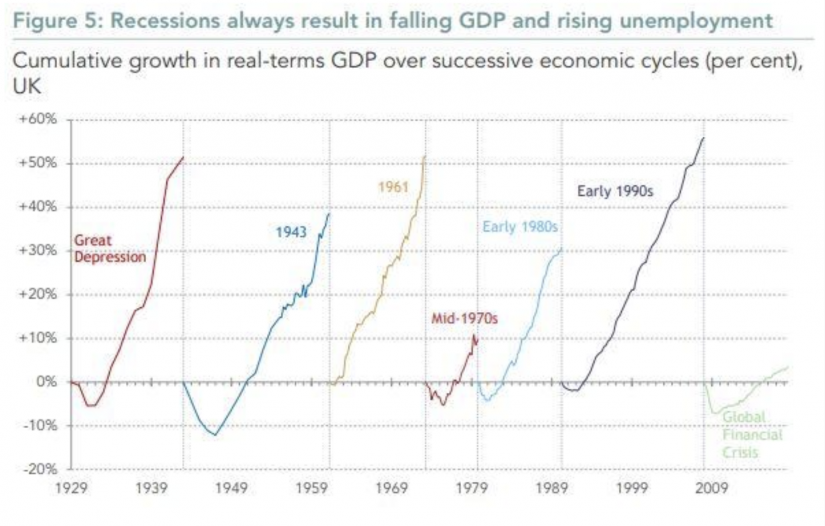 Employment eventually recovered, but at the cost of an unprecedented fall in real wages. James Smith gives some evidence to suggest that the reason employment got off comparatively lightly but wages suffered by much more than we might expect, was the 2008 sharp depreciation in sterling. This allowed firms to respond to the recession by keeping wages low, whereas in recessions in which sterling did not fall firms resisted nominal wage cuts and so had to resort to cutting jobs.

The idea that austerity was essential to reduce the deficit is simply wrong. It undoubtedly was a large factor in the weakness of the UK recovery. The tightening of fiscal policy has continued until today, with the consequence that interest rates have had to stay low to offset this fiscal tightening. The net result is that instead of rates being near 5% as they were before the GFC, they are below 1%. As James Smith points out, interest rate cuts in previous recessions have ranged from three to ten per cent. This means that conventional monetary policy has almost no room to counteract a new economic downturn if one came.

The Eurozone is in an even worse position. Their history is of two recessions since the GFC, the second of which was largely caused by fiscal tightening as a result of the Eurozone crisis of 2010-12. The last time core inflation in the Eurozone touched 2% was in 2008, and it is currently around 1%. (More details from Frances Coppola here.) Interest rates set by the European Central Bank (ECB) remain at their lower bound. If a new recession happened, caused for example by a disruption in trade due to Donald Trump, conventional monetary policy would be unable to do anything about it.

Of course, central banks in the UK and Eurozone still have various unconventional monetary policy tools. But the clue to their reliability at ending a recession is in their name. They are unconventional because they have only been used since the GFC, so we have limited evidence on their impact. It is like having an accelerator on a car where how far you have to push your foot down varies from second to second. You will end up driving slowly, which in economic terms means a prolonged recession.

All this is now largely understood by central bankers.

All have said in one place or another that they will be relying on fiscal stimulus to help counteract the next recession. The ECB needs fiscal stimulus right now to get out of the last one. Yet fiscal stimulus is in the hands of politicians and not central bankers, and many of the politicians and political parties that were crucial in implementing the austerity that hit the post-GFC recovery are still in power.

There is, therefore, a danger that the policy of fighting the next recession will fall between two stools. Central bankers will say, in their own quiet and politically sensitive way, that they are not equipped for the task, but politicians may be deaf to these messages and will once again start worrying about deficits that inevitably rise in an economic downturn. To say more, we need to differentiate between the UK and the Eurozone.

In the UK some may think that with a new Prime Minister the problem of austerity has disappeared. In order to get elected both candidates have promised all kinds of tax cuts or spending increases. But as I have argued recently, what we are seeing here is what economists call deficit bias: the tendency to borrow just for political gain. Worse still, if the borrowing is mainly for tax cuts (including tax cuts for the rich), there is a danger that it is part of a strategy called ‘starve the beast’, which involves increasing the deficit with tax cuts and then demanding spending cuts to bring the deficit under control.

The upshot is that a Tory leader wanting to spend and cut taxes to please party members provides no guarantee that they will undertake effective fiscal expansion in any future recession. Neither of the Coalition partners has apologised for the mistake of austerity, and we have no reason to believe that they wouldn’t do it again in any future recession. The only major party that has a fiscal framework that would automatically move to fiscal expansion when interest rates hit their lower bound is Labour.

In the Eurozone, there is also too little recognition among senior politicians that fiscal stimulus is required when ECB interest rates are at the lower bound. This is why Eurozone inflation is still below target. The OECD point to a crying need for more fiscal stimulus. Germany, in particular, has a great need for additional public investment but is restrained by a fiscal rule that is worthy of an economic stone age. Efforts to create a Eurozone budget that could act in a countercyclical way have also been blocked by politicians, despite support from the ECB.

We can hope for a change of political attitudes in both the UK and Eurozone, but central bankers should not be content with hope. They have been delegated the task of stabilising the economy, and if they fail to complete this task in economic downturn after downturn many will come to believe that delegating monetary policy to central banks was a huge mistake. In addition, it is not the case that all central banks can do when interest rates hit their floor is unreliable types of unconventional monetary policy.

A fail-safe way for a central bank to bring a recession to an end when interest rates are at the lower bound is to create money and give it directly to citizens. It could also create money and give it to borrowers by subsidising borrowing rates. The former is called helicopter money, a term due to Milton Friedman, and would require cooperation from government. The latter has been undertaken by the ECB in the past (see Eric Lonergan here), and so could be done to a greater extent without involving government. In essence, it involves cutting interest rates on borrowing to well below the lower bound, but keeping rates for savers at the lower bound, and funding the difference by creating money.

Central banks in most of the major economies have been happy to create money during a recession, but nearly always this money has been used by central banks to buy assets. The impact on the economy is then difficult to predict because no one’s income has increased and the interest rate for borrowing has not fallen significantly. Giving the money directly to people rather than buying assets would have a direct and more predictable impact in stimulating the economy, as Frances Coppola argues in her new book.

So why do central banks not do this? There are two major reasons. First, they worry that increasing people’s income is the job of elected governments, although I would argue that it is a central bank’s job to stabilise the economy if the government does not. (See my article with Mark Blyth and Eric Lonergan for more on helicopter money.) Second, if they create money to buy assets when the economy recovers, they can, if necessary, take money out of the economy by selling those assets. If they give that money away they will not have those assets to sell. However, this problem could be dealt with by governments guaranteeing the supply of assets a central bank needs.

Besides these arguments, I think there is a third argument why most central banks have not proposed doing these types of measures in a major way, and that is conservatism with a small c. The problem is that, if politicians unprepared to undertake fiscal expansion in a recession remain in power, that conservatism may be very costly both to us and to central banks themselves.

Simon Wren-Lewis is an Emeritus Professor of Economics and Fellow of Merton College, University of Oxford. He worked for Her Majesty’s Treasury as a budget-team member and for the National Income Forecasting Team as a senior economic assistant.