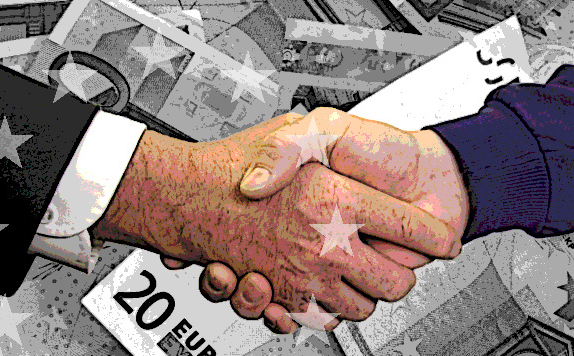 TruePublica Editor: You would have thought after banking scandals such as rigging Libor, mass money laundering operations involving drug cartels, illegal financial transactions with sanctioned countries, fraud on a scale never witnessed before and instigating the implosion of the worlds financial system that has cost taxpayers trillions, that the last people you would seek advice from are the organisations that caused it. But no, the European Central Bank, in seeking advice for banking regulations decided in its infinite wisdom that attendance by the shadowy lobbyists representing the big banks should be swayed in favour against civil society at a ratio of 98 to 2. And they wonder why there is civil disobedience on the streets of capitals across the continent and the popularity of the European Union project is plummeting!

By Corporate Europe Observatory: Open doors for forces of finance – 500 financial lobbyists at large at the ECB – by invitation

ECB advisory groups are used as lobby platforms by the financial industry, as our new report shows. ‘Open door for forces of finance at the ECB’ reveals that the advisory groups counselling the European Central Bank are dominated by representatives of some of the most influential global financial corporations.

Like many other EU institutions, the European Central Bank (ECB) actively seeks external expertise for its policies: a total of 22 advisory groups provide ECB decisionmakers with recommendations on all aspects of EU monetary policy. As with other EU bodies, however, there is a hefty industry-bias in many of these expert groups.

Such figures raise the question of whether the membership in the ECB’s advisory groups is a covetable asset for the big private banks, where opportunities to influence programme decisions can come with multi-billion euro stakes for the industry.

There are clear risks hidden in these numbers. The report mentions several key political battles over financial regulations where the advisory groups of the ECB have emerged as straightforward platforms for financial industry lobbying. Examples include the Financial Transaction Tax, the Libor/Euribor scandal, and the Forex scandal.

In connection with the release of the report, Corporate Europe Observatory has sent a letter to the Economic and Monetary Affairs Committee (ECON), urging members of Parliament to mount pressure on the European Central Bank to adopt rules on the composition and the work of its advisory groups. Rules that would live up to the standards regarding the ‘expert groups’ of the Commission, recommended by the European Ombudsman and the European Parliament itself.