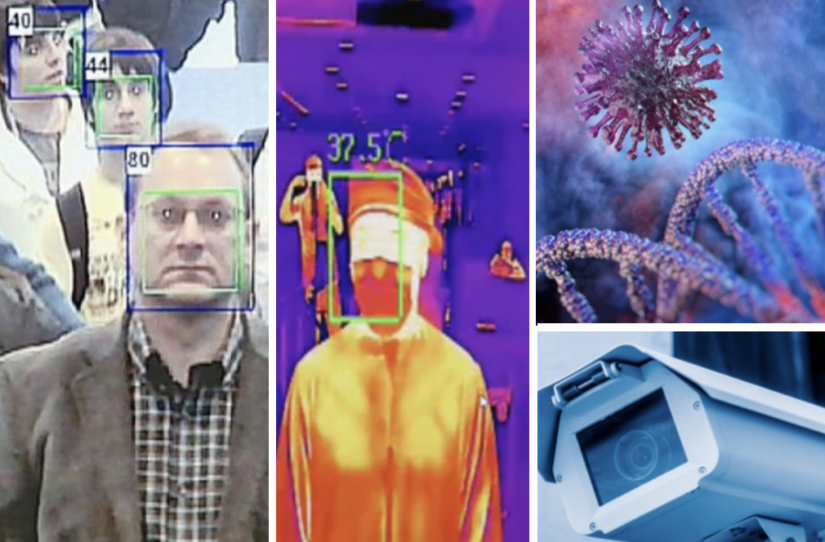 By Ayelet Shachar: Long after the COVID-19 pandemic is over, we may continue to be affected by its residue of ultra-sophisticated technologies of bio-surveillance.

If I ask you to close your eyes and imagine a border, what image comes to mind? Most of us would think of barbed-wire fences planted firmly on frontier locations. From the Great Wall of China to the Berlin Wall, fortified barriers have long served as powerful symbols of sovereign control. Today, however, a new trend has emerged: the growth of invisible borders. These are borders that rely on sophisticated legal techniques to detach migration control functions from a fixed territorial location. The unmooring of state power from a fixed geographical marker has created a new paradigm: the shifting border.

Unlike a reinforced physical barrier, the shifting border is not fixed in time and place; it is comprised of legal portals, surveillance tools, and AI-powered risk assessments rather than brick-and-mortar walls. The black lines we find in atlases no longer coincide with the agile locus and focus of migration control. Instead, governments can shift the location of the border both outward and inward, gaining tremendous capacity to regulate and track individuals before, and after, they reach their desired destination. The flexible tentacles of the shifting border were once deployed primarily to monitor people on the move, escaping poverty and instability. Today, everyone, including citizens of wealthy democracies, are potentially within its ever-extended reach.

Even prior to the COVID-19 pandemic, governments were enthusiastically embracing biometric ePassports. These look like traditional passport books but contain an embedded electronic chip that encodes information about the passport bearer. Such embedded information includes a digital photo that can be verified against vast, unseen databases. While the chip deployed in biometric passports is “passive”—it does not transmit or track any information—it is possible to imagine a more Orwellian future whereby “active” tracking devices are involved. What’s more, global entry fast-tracks, which are already popular with trusted travellers in Asia, Europe and North America, rely on biometric identity verification using face, fingerprint or iris recognition—rather than traditional border inspection. Government officials foresee a future whereby arriving and departing passengers will not require any travel documents at all. Instead, biometric borders will come to play a key role in the politics of mobility management, turning the bodies of migrants and travellers into the sites of regulation of movement and risk prediction.

Faced with the challenge of defeating an invisible virus, a growing number of countries are turning to futuristic tracing measures

In addition to stretching outward, the border is also seeping inward. Faced with the challenge of defeating an invisible virus, a growing number of countries are turning to futuristic tracing measures, deploying surveillance tools once used for anti-terrorism and international espionage against their own populations at home. These include measures such as geolocating the cellphones of those who have tested positive for the virus (in some cases, without seeking consent for such tracking); erecting “geo-fences” to draw virtual enclosures around quarantine zones; and activating AI-powered thermal cameras that detect change in a person’s body temperature in order to identify whom in a crowd has a fever (as has been done in Beijing’s Qinghe Railway Station).

Another new possibility is conditioning movement on colour-coded QR or numerical scales of individualized “risk assessments” based on big-data-driven algorithms incorporating information on one’s health condition, travel history, and contact tracing. In the United States, Google and Apple will collaborate to use Bluetooth technology to create a new interoperable platform that will permit to “reverse engineer” the movements of the COVID-positive—and those who came in contact with them. Even European countries that adhere to stricter data privacy regulations have warmed to such ideas.

Questions of volitional versus coerced use of such technologies—and their architectures—will have to be debated. The answers may come to serve as a new fault line between democratic and authoritarian regimes. Once put into operation, however, it may prove difficult to return the genie of bio-surveillance back to the bottle, as it provides governments unprecedented technological “see-all” eyes to monitor and track everyone’s mobility everywhere.

Even prior to the current crisis, the European Union-funded a pilot project, entitled iBorderCtrl designed to help protect its borders. This monitoring system is designed to prescreen incoming travellers, who are required to “perform a short, automated, non-invasive interview with an avatar [and] undergo a lie detector.” The data is then linked to any pre-existing authority data and stored in large databases that are connected with “portable, wireless connected iBorderCtrl units that can be used inside buses, trains, or any other point [to] verify the identity of each traveller… [and] calculate a cumulative risk factor for each individual.”

Once put into operation, however, it may prove difficult to return the genie of bio-surveillance back to the bottle

The calculated risk factor will appear in any future border crossing and may lead to further checks or even a denial of entry. The iBorderCtrl avatar is trained to detect human deception by looking for “micro-gestures”—subtle nonverbal facial and bodily cues. Similar developments are now pursued in the United States, where AI-powered screening systems that can track changes in blood flow or subtle eye ticks may soon become operational. The once-fixed territorial border is thus not just shifting inward and outward, but also multiplying and fracturing. Each person “carries” the border with her as she moves across space and place.

These spatial and temporal contractions and expansions bear dramatic implications for the scope of rights and liberties that each of us may expect to enjoy, whether at home or abroad. Treating the body as the site of regulation is no longer solely a purview of national governments. International organizations are also now relying on cutting-edge technology as they reimagine the delivery of humanitarian assistance. The UNHCR and the World Food Programme have partnered with IrisGuard—a commercial company—to create a worldwide biometric registration system for refugees, especially those without official governmental documents, to acquire an individualized, digital legal identity. Think of it as a blockchain “stamp” that will follow its holder anywhere she goes. In a scene that might be fit for a science-fiction movie, Syrian refugees in Jordan now receive their food rations in the blink of an eye.

Long after the COVID-19 pandemic is over, we may continue to be affected by its residue. New ultra-sophisticated technologies of bio-surveillance will trace people in novel relations of power in political spaces of im/mobility. In this evolving reality, shifting borders are increasingly wielded to determine who deserves passage through the otherwise bolted gates of admission. If the body will become our ticket for mobility and subsistence (or conversely, a trigger for its denial), the risks and opportunities for use and abuse are immense.

These developments raise significant ethical and legal dilemmas, and like the pandemic itself, risk exacerbating existing inequalities. If “knowledge is power,” then “data is control.” Whoever controls the data will have a tremendous edge. Technologies that scan, catalogue and scrutinize our biometric imprint and identity raise deep and profound challenges that remain hard to see, much like the shifting border itself.

As migration and population monitoring become increasingly intertwined, we must be vigilant to ensure that in the post-crisis world, the digital and bio-surveillance tools that today help the authorities fight the virus will not be used in the future to indiscriminately shield the body politic from real, or imagined, threats.

Ayelet Shachar is Director of the Max Planck Institute and Professor of Law and Political Science at the University of Toronto. This article also appeared in openDemocracy