Britain’s NHS – Deliberately Brought To The Brink of Collapse 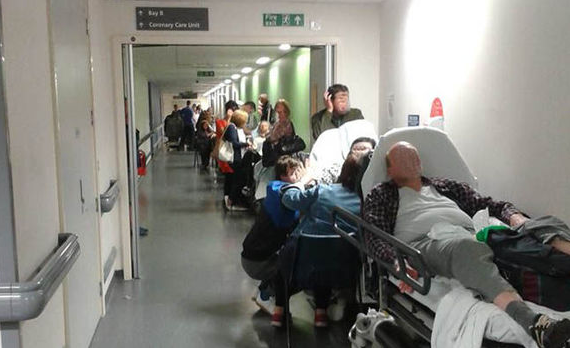 By Robert Stevens – wsws.org: The catastrophic situation facing the UK’s National Health Service (NHS) in only the first weeks of winter, is the devastating consequence of years of systematic underfunding, privatisation and profiteering.

Even as the NHS approaches its 70th anniversary in July, a question mark has been placed over its very survival.

In scenes that have made the world’s news bulletins, hospitals are being forced to turn away severely ill patients, with overcrowded Accident & Emergency (A&E) units unable to deal with any more patients.

Outside hospitals, ambulances queue up, unable to hand over their patients. Over 55,000 people have had scheduled “non-urgent operations” cancelled and put back until at least February.

· 16,900 people were forced to wait for more than 30 minutes in ambulances to be seen by staff at A&E over the Christmas week.

· During the week ending New Year’s Eve, 4,734 ambulances had a wait of at least an hour before they could admit patients to hospital. This was double the 2,413 who waited this long the previous week and is in contravention to guidelines that ambulances should wait no longer than 15 minutes.

· Twelve of England’s NHS Trusts, managing 16 hospitals, reported they were operating at 100 percent bed occupancy levels—meaning no beds were free. Data collected from all 137 trusts revealed an average bed occupancy rate of 91.7 percent—well above the recommended safe level of 85 percent.

On Wednesday, 24 NHS Trusts issued “black alerts”—meaning that for at least a 24-hour period beds were at full occupancy or nearing capacity so that hospitals cannot offer comprehensive care and patient safety is at increased risk. By Thursday evening, 16 hospitals still remained on black alert according to a poll of 100 NHS Trusts with an A&E unit. One of the University Hospitals of Leicester NHS Trust has been on black alert since December 28.

This week, Bedford Hospital NHS Trust issued an “urgent” public notice, pleading with relatives to come to the facility and help, as its bed occupancy reached 100 percent. It advised relatives, “Many of our patients are elderly and require support after discharge, and we ask that relatives support us and their loved ones by helping us discharge patients that are medically well to leave hospital…”

Seriously ill patients are regularly being forced to wait 10 hours and even longer in A&E units.

NHS employees now often refer to the conditions they face at work as a “battlefield” or “war zone.” Richard Fawcett, a senior doctor in emergency medicine at the Royal Stoke Hospital in Staffordshire, tweeted Tuesday: “As an A&E consultant at University of North Midlands NHS Trust I personally apologise to the people of Stoke for the Third World conditions of the department due to overcrowding.”

Staff are resorting to desperate measures to treat people under intolerable conditions. On Friday, the Guardian reported the comments of a nurse in the southeast of England who said that during her shift on New Year’s Day she left the hospital and began treating people outside in queued up ambulances—some of whom had waited for up to six hours. She feared for the safety of people forced to wait for so long:

“During my shift I treated patients, including taking bloods and prescribing antibiotics while they were in the back of the ambulance as there was no space in the hospital. … One patient arrived early afternoon and was still in the ambulance when I handed over to the night shift. I did question whether this was safe.”

All of this is a deliberately created crisis.

Since 2010, the NHS has seen its resources decimated due to the imposition of tens of billions of pounds in “efficiency savings”—which will be ongoing until 2020. This has been on top of historically low levels of NHS funding from central government.

In 2010, the Conservative-Liberal Democrat coalition allocated an “increase” in NHS spending of just 0.1 percent. From then on, it received an average increase of just 1.2 percent above inflation. This contrasts to the previous average of almost 4 percent allocated by governments of all stripes since the NHS’s foundation.

To answer the government’s critics, in the last budget, the NHS was allocated an extra £1.6 billion from this April to cover the 2018-19 financial year and just £335 million extra for this winter. This is a drop in the ocean. The NHS requires £4.1 billion just to maintain its estate, much of which is in an advanced state of disrepair. In its last settlement, just £2.9 billion was made available.

Staffing levels have been slashed, leading to 40,000 nursing vacancies. OECD figures reveal that the UK is now placed 24th out of 34 member countries in terms of the number of doctors they have relative to their populations. Even Greece, whose health service has seen unprecedented cuts over the last decade, has more.

The media focus on supposedly excessive demands being placed on A&E departments—due to everything from a higher than usual incidence of people with seasonal flu or holiday drunkenness—is misleading. These normal and expected demands on A&Es are made worse by the NHS being starved of funding, and because many people who previously relied on social care provision are being deprived of it.

Austerity cuts have been pushed through by successive Labour and Conservative-led governments, with adult social care and local government having their budgets slashed by nearly 40 percent. As a result, 900,000 people, many elderly—including substantial numbers requiring intensive health care support—are no longer entitled to receive care and are having to be treated in hospitals.

The plan of the ruling elite is to use the anger generated by this appalling situation to justify policies aimed at ending public health care free at the point of need, and to introduce rationing, while the more profitable parts of the system are hived off to the private sector. To this end the NHS is being deliberately run down, endangering the safety and even lives of millions of people.