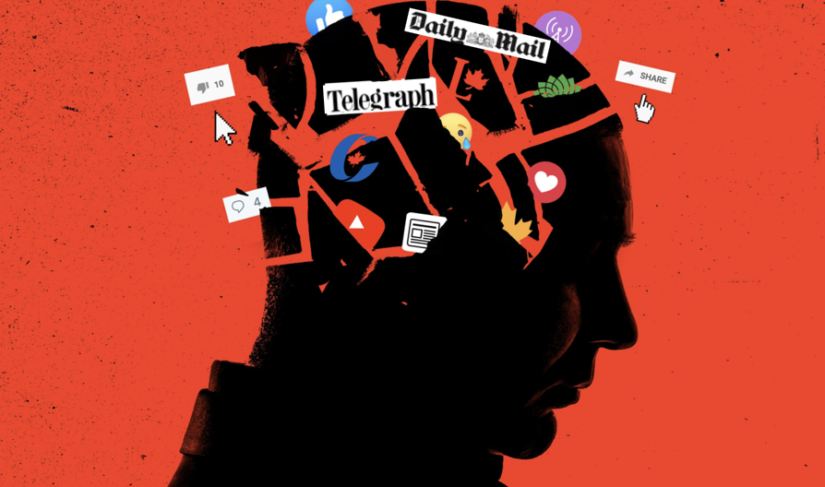 By TruePublica: It is not as if the battle of information warfare has not been going on for some time now. It was amply demonstrated in the runup to Brexit, throughout the three years to last December and is now fully deployed to contain the COVID-19 crisis.

The mainstream media frenzy over Prof Neil Ferguson’s apparent and not very extraordinary love life is just the latest example of a scientist who has been targeted for confronting parts of Britain’s political-media complex. He has been scapegoated by a government that is failing at every turn to manage the COVID-19 crisis and the political fallout it is causing. Ferguson is just one of a few in the list who will be used as Boris Johnson’s human shield against public outrage.

Was Ferguson, who sat on the government’s Scientific Advisory Group for Emergencies (SAGE) before his resignation, really so wrong in his actions as to require one of Britain’s best and most talented to resign. The PM has done much worse and not resigned. We shouldn’t forget, just prior to the COVID-19 crisis, the PM rushed off with his girlfriend to a secret (undisclosed) hideout, given by a Tory donor just as the Russia Report was raging and days away from being in the public realm. We shouldn’t forget that Johnson is as inappropriate a leader for Britain as can be. He proudly characterised himself as someone who is sexist, a homophobe, a racist and a misogynist.

But shock horror – Prof Ferguson is having an affair. The lurid front-page headlines are now following little more than the usual campaign to discredit him by those ideologically opposed to anything where experts, pressure groups and public opinion mean government could intervene in the public interest. For instance, it’s the same tactics used against scientists in other fields, most particularly climate change. 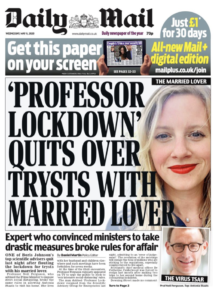 Damaging the national interest for self interest

Bob Ward is policy director at the Grantham Research Institute on Climate Change and the Environment at the London School of Economics. Here’s what he has to say on the same subject:

“It is a further sign that some media commentators and politicians favour a version of Britain in which politicians and newspaper editors dictate the public’s understanding of biology and physics.

Ferguson has been under attack ever since his research team’s modelling suggested in mid-March that hundreds of thousands of deaths in the UK from Covid-19 were possible if stronger efforts were not made to curb the growing epidemic.

Within a week, the prime minister announced the current lockdown measures. The move was perceived as a U-turn because the government’s chief scientific adviser had days earlier suggested that allowing widespread infection might be an option to achieve “herd immunity” across the country.

Ferguson’s contribution was initially praised, but it was not long before his reputation was under assault from parts of the media traditionally sceptical of a so-called “nanny state”.

On 28 March, the Daily Telegraph published an article alleging that “the scientist whose calculations about the potentially devastating impact of the coronavirus directly led to the countrywide lockdown has been criticised in the past for flawed research”.

The story relied on the views of a handful of critics of how Ferguson’s models were used by the then Labour government to tackle the 2001 outbreak of foot and mouth disease. The article failed to mention that Ferguson received an OBE in recognition for his important role in the crisis, or that he was afterwards elected a fellow of the prestigious Academy of Medical Sciences.

The next day, Peter Hitchens, in the Mail on Sunday, described the lockdown as “mass house arrest” and identified Ferguson as being “one of those largely responsible for the original panic”.

A few days later the Wall Street Journal published an article by two British commentators that argued “the coronavirus pandemic has dramatically demonstrated the limits of scientific modelling to predict the future”. It singled out Ferguson’s work and complained that “reasonable people might wonder whether something made with 13-year-old, undocumented computer code should be used to justify shutting down the economy”.

Bizarrely, this article was written by Benny Peiser and Andrew Montford, the director and deputy director of the Global Warming Policy Foundation, which was set up by Nigel Lawson in 2009 to lobby against climate change policies. The foundation has a track record of attempting to discredit climate models that show rising greenhouse gas levels risk warming the world to dangerous levels.”

Only this week – government scientific advisers were found to be furious at what they saw as an attempt to censor their advice on government proposals during the Covid-19 lockdown by heavily redacting an official report before it was released to the public.

The Guardian published a report by the Scientific Advisory Group on Emergencies (SAGE) last week designed to reduce growing criticism about the lack of transparency over the advice given to ministers responding to the coronavirus. However, large blocks of text in their report, produced by SPI-B, the SAGE subcommittee providing advice from behavioural scientists on how the public might respond to lockdown measures, were entirely blanked out.

One SPI-B adviser said: “It is bloody silly, and completely counterproductive.” A second committee member said: “The impression I’m getting is this government doesn’t want any criticism.”

One member of the government’s advisory committee called it “Stalinist censorship“. Another scientific adviser is understood to be considering resigning over the government’s secretive approach to science around the Covid-19 outbreak, which they believe is undermining public trust.

All of this undermines the independence of scientific experts as well as trust and confidence – but worse, is supported by a media complex that spews out exactly what it has been given by the Downing Street office of propaganda.

A week ago, the behavioural scientists on the team said that in their four-page report that there was a consensus that the high levels of adherence to government guidelines “are likely to be maintained in the short-to-medium term, for as long as it is evident that Covid-19 poses a serious risk that cannot be managed in any other way”. Last night Boris Johson went against that advice in his speech to the nation, but only after various newspapers had been given several days to break the news that the lockdown was coming to an end.

And as Bob Ward says –  “Many other scientists in the UK working on issues that have implications for government policy know what it is like to be vilified, both publicly and privately, for their findings. They are regularly attacked by many of the British media commentators who are currently joining the pile-on to Ferguson.

It is time to put a stop to these media lynch mobs that risk driving Britain back into the Dark Ages. We must continue to base our decisions on the advice of experts such as Ferguson, and reject the irrational arguments of those who want political dogma to trump evidence.”