Calls for UK to stop recruiting children into armed forces 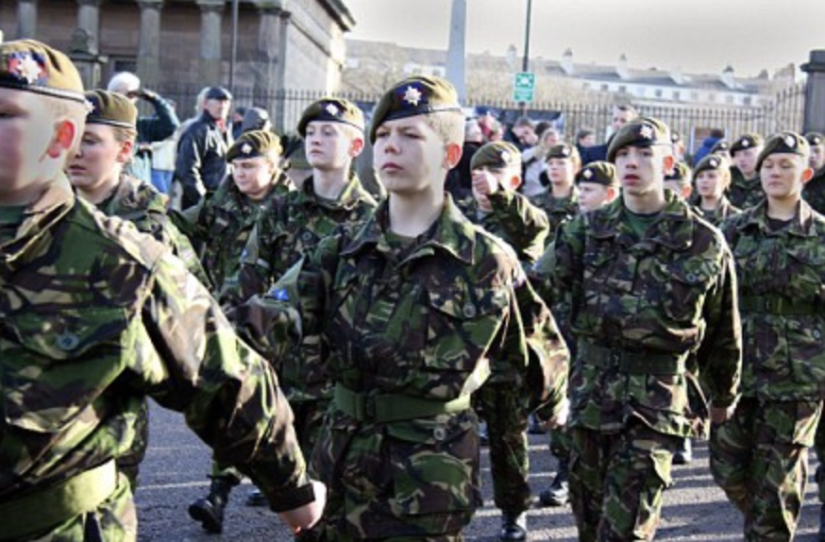 David Collins, a Committee member of the Movement for the Abolition of War of Friends of Le Monde Diplomatique and of Veterans For Peace UK, has drawn attention to a video on VfP’s website, “Made in the Royal Navy”, published by Child Rights International Network (CRIN). The film charges the British army with intentionally targeting young people from deprived backgrounds for the most dangerous front-line jobs. It plays on the natural anxiety in boys and young men about how they are going to become a man and go out into the world. Its message is that the Navy will remake the raw youth into a heroic version of the inadequate boy that they once were.

The actual experience of most of these youngsters is set out in a report published in August 2019: Conscription by Poverty? Deprivation and army recruitment in the UK.

In 2011, Civilisation 3000 published Britain’s child soldiers – 2 that reminded readers that, twelve years earlier, the BBC had reported the British Army was being urged by the United Nations to stop sending young soldiers into war.

“with the exception of Russia, and apprentices in Ireland, the British Army is unique in Europe in recruiting at the age of 16”

Following Symon Hill’s work in The Friend, the Ekklesia website, and a Nato Watch article, an article by Michael Bartlet, Parliamentary Liaison Secretary for Quakers in Britain, pointed out that “with the exception of Russia, and apprentices in Ireland, the British Army is unique in Europe in recruiting at the age of 16. Of 14,185 recruits into the army last year, 3,630 or over 25%, joined under the age of 18 . . . Deprivation and army recruitment in the UK . . . Those joining the army at the age of 16 often come from the poorest and least educated backgrounds. Some have reading ages of a child of half that age. They lack the confidence to seek a change in their career in the same way as those training for professions.”

Ian Davis, the Director of NatoWatch, sent a reference to the post by Symon Hill, now placed on its website. He added that the Coalition to Stop the Use of Child Soldiers, together with War Child, UNICEF UK, the Children’s Society, and the Children’s Rights Alliance for England are calling for the Armed Forces Bill to be amended to end the “outdated practice” of recruiting soldiers aged under 18, a call backed by Amnesty International UK and the United Nations Association.

A 2016 report by public health charity Medact found that soldiers recruited aged 16 and 17 were twice as likely to be killed or injured when in combat compared to those enlisted when aged 18 or over. Medact also found that they were more likely to commit suicide, self-harm, abuse alcohol and develop post-traumatic stress disorder than older recruits

In May this year, the BMI Journal reviewed an article: Adverse health effects of recruiting child soldiers, published in February. It rejected the main justification resting on fears of a ‘recruitment shortfall’: saying that given the extensive harms described in its report, to put recruitment figures above the health and well-being of children and adolescents seems misguided and counterproductive for both the Ministry of Defence as a governmental body and wider society. The second justification alleging economic and occupational benefits to recruits, many of whom come from disadvantaged backgrounds was also rejected:

“We have seen that it is precisely child recruits from disadvantaged backgrounds who are at highest risk of adverse outcomes in the military. Furthermore, figures from 2017 show that those recruited under the age of 18 constituted 24% of those who voluntarily left the Armed Forces before completing their service—this also increases the likelihood of lower mental health outcomes”.

It supported the views of those of the fourteen organisations mentioned here, recommending that the UK end its practice of recruiting adolescents to the armed forces.