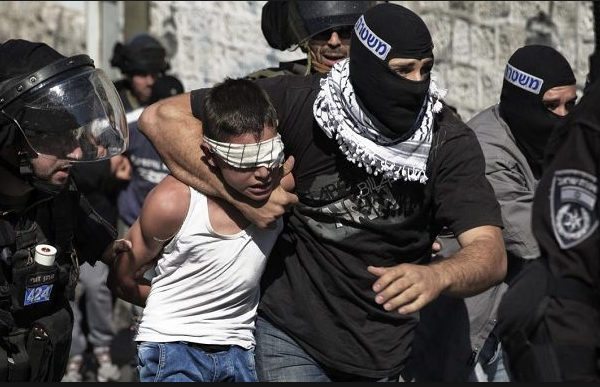 While more than 230 Palestinians have been killed and thousands more injured by Israeli forces since March, London’s ties with Tel Aviv are growing ever stronger.

Yet, I cannot find a single article in the British “mainstream” media noting the depth of supportive UK policies towards Israel. This media blackout is allowing Britain to continue backing Israeli aggression in the occupied territories with impunity.

In the two years 2016 and 2017, when Theresa May has been prime minister, the UK sold £402m worth of military goods to Israel, including components for combat aircraft, tanks, drones and military communications. As Prince William visited Israel in late June, the UK approved export licences for 34 types of military-related equipment.
These arms exports have been authorised while Palestinians risk their lives in the Great March of Return demonstrations on the perimeter fence between Gaza and Israel. Some 33 children were among those killed, alongside more than 24,000 Palestinians injured. Dozens of people have had limbs amputated, including 15 children, while the UN reports that 1,200 patients will require long-term limb reconstruction.

But many services are unavailable in Gaza as the healthcare system grapples with the massive influx of casualties. By the end of October, only 74 of 335 exit-permit applications had been approved by Israeli authorities for injured Palestinians needing attention outside of Gaza.

Documents revealed by Edward Snowden in 2014 showed that the US National Security Agency was providing to its Israeli counterpart, the Israeli SIGINT National Unit (ISNU, also known as Unit 8200) data used to monitor and target Palestinians.

A key partner of the NSA and ISNU was shown to be Britain’s spy centre, GCHQ, which was feeding the Israelis selected communications data it collected. In 2009, during Israel’s Operation Cast Lead in Gaza that left nearly 1,400 people dead, including 344 children, this involved sharing information on Palestinians.

Is the UK doing this now? Last year, Robert Hannigan, the outgoing director of GCHQ, said that his organisation had a “strong partnership with our Israeli counterparts in signals intelligence” and that “we are building on an excellent cyber relationship with a range of Israeli bodies”.

Earlier this year, Hannigan became chair of BlueVoyant Europe, a global cybersecurity firm whose operations are managed by, among others, a former deputy commander of Unit 8200, and a former division head in the Israeli security agency Shin Bet. Another key player in the firm is former British minister Lord Mandelson, who chairs BlueVoyant’s European Advisory Group.

Cybersecurity has become a key area of UK-Israeli cooperation. A recent report by the British Israeli lobby group, Bicom, notes that “government-to-government cooperation between the UK and Israel in cybersecurity is strong and has been described by a senior UK official as a ‘first-order partnership’”.

It added that “there are close working relationships between the countries’ national cybersecurity agencies and acknowledged cross-fertilisation in the development of their national security strategies”.

Indeed, the report notes that “it is perhaps no coincidence” that the former UK ambassador to Israel, Matthew Gould, returned from his posting in Tel Aviv in 2015 to become director of cybersecurity at the UK Cabinet Office.

In striking evidence of Britain’s reliance on Israel’s cybersecurity sector is the report’s claim that since major British banks are clients of many Israeli cyber companies, “the vast majority of digital transactions and credit card e-commerce in the UK is essentially protected by Israeli technologies”.

As I documented in an article for Middle East Eye in June, the UK’s military relationship with Israel is extensive, covering areas such as naval cooperation and the provision of components for Israeli nuclear-armed submarines. But the lack of journalistic investigations means that few details have emerged on many programmes.

In September, the government revealed that it was providing military training to Israel. This followed news in 2016 that British military pilots were due to be trained by a company owned by Israeli arms firm Elbit Systems. Training is longstanding: in 2011, it was revealed that British soldiers were being trained in Israel in the use of drones that had been “field-tested on Palestinians” during the 2009 war in Gaza.

The contracts keep coming. Earlier this year, the UK’s Ministry of Defence agreed to a contract worth up to $52m to purchase a battlefield management application from Elbit Systems UK, while Israel’s armour specialist, Plasan, was selected by the UK Ministry of Defence to design and produce armour protection for Britain’s new Type 26 frigates being built by BAE Systems in Glasgow.

At the Conservative Party conference in October, senior government figures queued up at an event hosted by Conservative Friends of Israel to defend Israeli actions in the occupied territories.

Similarly, Liam Fox told Netanyahu last week: “I am looking forward to an enhanced and even more ambitious trade and investment relationship with Israel as we work closer together going forward into the future.” Netanyahu replied: “Britain is, in fact, our largest trade partner in Europe … we value the friendship, we value the prospects for the future.”

Fox and Williamson are continuing the strategy of their boss, Theresa May, who has said of Israel: “I want to build the strongest and deepest possible relationship between our two countries.”

Yet, the reality of what this means in practice – especially in terms of British military and intelligence support for Israel, and how this facilitates Israeli aggression – is simply not being reported in the British media.

The longer that continues, the easier it will be for Israel to continue to act with impunity for its crimes.