Conservative Manifesto Pledge: “to seize full control of the internet” 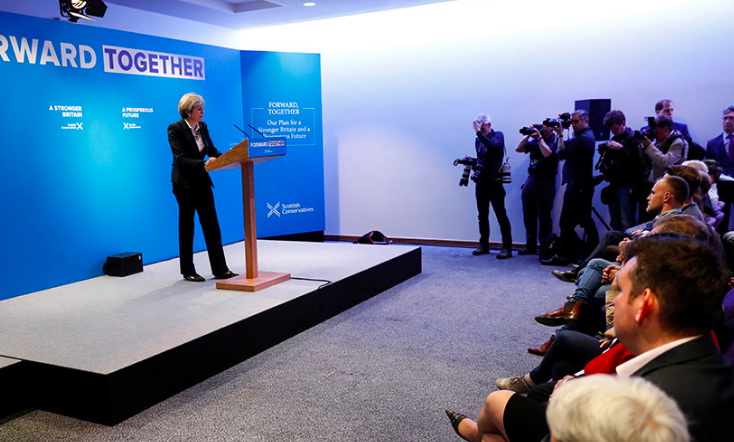 By Graham Vanbergen – I’ve been warning ever since the start of TruePublica that this day will arrive in Britain.

In America, Donald Trump is attempting to give himself powers to completely shut down the internet ‘in case of an emergency” – whatever that means. Forbes writes: “The view that the internet should be open, interoperable, and free from state censorship has been a pillar of American policy since the 1990s. Mr. Trump sharply departs from this establishment consensus.”

Theresa May has similar ambitions. Under her stewardship we already have many controls of the internet – and like surveillance that started off searching for terrorists, that expanded to criminals and eventually surveils every single one of us, this new manifesto pledge will grow arms and legs and turn into a new battleground for civil liberty and human rights organisations.

At the bottom of the Tory party manifesto published on Thursday, there is a technology section that clearly states the party’s intention to fully control the online world through a new set of regulations.

Theresa May wants additional sweeping new powers for the government to indiscriminately seize complete control of the internet.

The Independent “Theresa May wants to control what is posted, shared and published online”and that the UK should be a global leader in internet regulation.”

I can see this being the case. Britain is already a global leader in mass surveillance systems that the rest of the democratic world do not have – or want.

Conservative party advisors have confirmed its full intention “to put huge restrictions on what people can post, share and publish online.” The confirmation makes it clear the government intends to put limitations on search engines from including certain websites.

Although the manifesto mentions restricting hate speech, pornography or “other sources of harm” – it is a very vague description of their actual intentions. After all, the publication of MP’s expenses in 2011 could be classified as a source of harm – to politicans. Don’t forget that Theresa May has put her full support behind the Espionage Bill that intends to criminalise whistleblowers, leakers, journalists and editors from publishing information of public interest, such as the MP’s expenses scandal that could harm the interests of politicians or their corporate paymasters.

Tory advisers told BuzzFeed the government would be particularly keen on snatching powers from internet giants Google and Facebook.

SaveTheInternet says  that “The internet without Net Neutrality isn’t really the internet. Unlike the open internet that has paved the way for so much innovation and given a platform to people who have historically been shut out, it would become a closed-down network where cable and phone companies call the shots and decide which websites, content or applications succeed.” You can now expand that statement to include ‘government’ deciding which websites, content or applications succeed – at least in Britain anyway! It is, after all a Conservative Manifesto pledge.

Election: LSE report on the British Press – ‘From watchdog to attack dog’