COVID-19: What history has taught us already 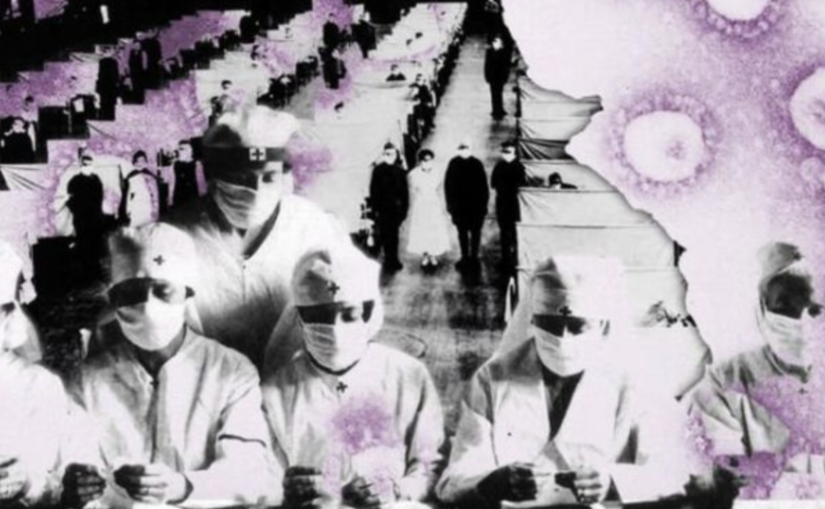 By TruePublica: Each day brings a new report of the biggest increase in infections of COVID-19. The government has now realised the seriousness of this new strain of Coronavirus and how it could threaten the viability of any government, let alone one as unstable as Britain has right now. The propaganda machine is in full swing to assure the people that everything humanly possible is being done to ensure the wellbeing and security of the nation.

Just over 100 years ago in 1918, the same thing happened, only then it was much worse. A flu virus ran amok, and like today, there was no vaccination available and no real way of defending yourself or your family from a hidden killer. Like today’s COVID-19, the 1918 Spanish Flu outbreak was 25 times more deadly than any flu virus before it.  And when it was done, it had killed more people than the first and second World Wars combined. It is widely thought that it wiped out around 3 – 5 per cent of the human species on planet earth.

The author of one book on the subject wrote – “the flu resculpted human populations more radically than anything since the Black Death”.

If the same thing happened today, that same percentage would see 385 million people in mass graves all over the world. Britain alone would see 3.3 million succumb to its apocalyptic efforts.

The WHO and other international NGO’s have praised the Chinese government for acting quickly to contain the COVID-19 virus. They were seemingly very efficient, open and transparent about their actions and the infection rate has reportedly already peaked and started falling. However, Reporters Without Borders emailed TruePublica to inform us that that is not the case:

“Many journalists and whistleblowers have been arrested or silenced by the Chinese authorities or subjected to enforced disappearance. What was their crime? Publishing information about the coronavirus epidemic in China, about hospitals with more patients than they can handle, about the suffering of the population and the inadequacy of the measures taken by the government to deal with the virus. The coronavirus has already killed thousands of people but the Chinese government persists in trying to censor information about the epidemic and manage this now international crisis in a completely opaque and bureaucratic manner.”

RSF has appealed for the release all detained journalists and whistleblowers at once and urged Beijing to allow the media to cover developments without risking arrest, enforced quarantine or disappearance.

It seems strange that we celebrate, commiserate and pay our respects to events in our country’s history from bonfire night to remembrance day, Halloween to the summer solstice – and yet have completely forgotten the most deadly fight for life in the age of our great grandparents.

This was not a war with guns and heroes fought on the frontlines or in the trenches, fighting the Spanish flu was a silent war, a war behind our own front doors.

And yet, its impact was global on every front. It changed economies and politics and even world events. The eldest son of the ruling family in Saudi Arabia died of it, so did the Brazillian president and president of the Union of South Africa. The first lady of America’s president died and so did the Dodge Brothers (of Dodge automobiles). Others included the daughter of Sigmund Freud, the manager of Scottish football, and Mark Sykes, the man attributed to the Skyes-Picot agreement regarding the partitioning of the Ottoman Empire by Britain, France and Russia, and was a key negotiator of the Balfour Declaration.

The famous were not immune from this deadly pandemic and the list of celebrities from actors to athletes that perished covered the front pages of national newspapers for two years.

Anton Dilger, a German-American dual citizen was sent by Germany in 1915 (when the USA was neutral in WW1) to America to open a laboratory and spread diseases in a campaign of biological warfare to stop American resources being sold to Germany’s enemies. Dilger went on the run in 2018 and fled to Spain, where he died of the flu raging across the continent. In fact, the German high command attempted to attribute their loss of the war to the Spanish flu outbreak.

Despite the fact that the 1918 flu wasn’t isolated to one place, it became known around the world as the Spanish flu, as Spain was hit hard by the disease and was not subject to the wartime news blackouts that affected other European countries. In fact, it appears that the Spanish flu emanated from either America or Asia and as it emerged at a time of global conflict it is known that more U.S. soldiers died from the 1918 flu than were killed in battle during the war. Forty per cent of the U.S. Navy was hit with the flu, while 36 per cent of the Army became ill, and troops moving around the world in crowded ships and trains helped to spread the killer virus to many parts of the world.

Like today, officials imposed quarantines, shut down public places, including schools, churches and theatres and large scale gatherings. People were advised to avoid shaking hands and to stay indoors, libraries put a halt on lending books.

By the summer of 1919, the flu pandemic came to an end, as those that were infected either died or developed an immunity.

Almost 90 years later, researchers announced they’d discovered what made the 1918 flu so deadly: A group of three genes enabled the virus to weaken a victim’s bronchial tubes and lungs and clear the way for bacterial pneumonia. The three Coronavirus strains including COVID-19 – has very similar effects on the human body.

There is a myth about the Coronavirus though – and that is that it is somehow a new strain of a disease that we knew nothing about. The reality is that Coronaviruses have been around for at least 10,000 years or 8,000 BCE.  It has been known for some time that a human coronavirus named NL63 and a bat coronavirus shared an MRCA (most recent common ancestor) around 563–822 years ago. In 2012, the Journal of Virology, reported that this particular type of strain, had the potential to reverse infect – not just from human to human – but human to mammal.

“Since 2004, this HCoV has been detected in 1.0 to 9.3% of respiratory tract samples collected from several different countries which indicates that HCoV-NL63 is distributed worldwide. There is no known reservoir for this virus, and little is known about its evolutionary history prior to 2004, although phylogenetic evidence suggests that HCoV-NL63 has infected humans for centuries, as it is predicted to have diverged from HCoV-229E approximately 1,000 years ago”. These observations support the hypothesis that human CoVs are capable of establishing zoonotic-reverse zoonotic transmission cycles.” 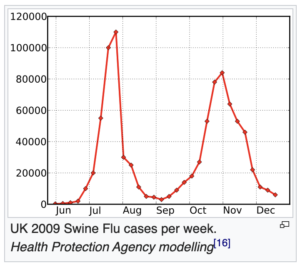 The 2009 flu pandemic was a global outbreak of a new strain of influenza A virus subtype H1N1, first identified in April 2009, termed Pandemic H1N1/09 virus by the World Health Organization (WHO) and known in the UK as swine flu. The symptoms to humans are almost identical to the current COVID-19 outbreak. The outbreak was first observed in Mexico and quickly spread globally. Most people don’t know that in the UK, there were two waves that hit the country (as they are expecting this time around). In May, the first cases were reported and were slow to increase. By mid-June 50,000 cases a week was occurring and by end July 110,000 cases were being reported every week. GP’s were seeing 250,000 people a week at the peak of infections. By September cases fell back to less than 5,000 a week and then the second wave took another six weeks to reach a peak of 85,000 cases a week, which then declined more slowly until the end of December. This virus predominantly attacked the young, especially 5 to 14 years old. The numbers of infections and deaths differ depending on what you read but the mortality rate was officially recorded at 0.04% – just under half of one per cent. Officially, there were 360 deaths (from an estimated 900,000 cases of infections). However, the official infection rate recorded by GP’s was much higher overall and therefore, probably, so was the number of fatalities. Data collection would not have been anything like the capabilities of today. 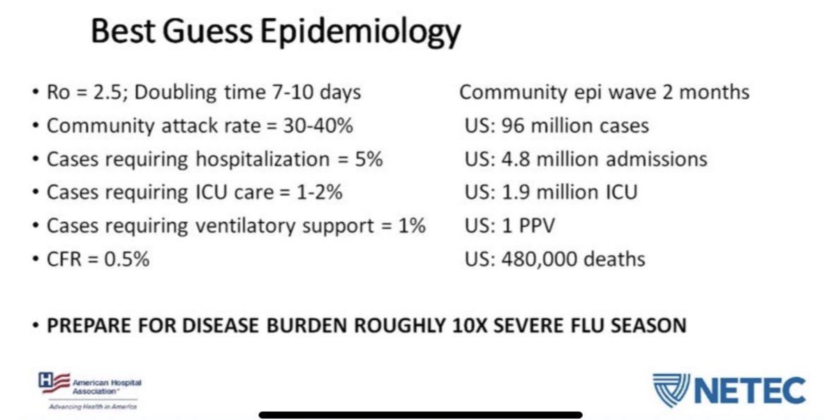 The American Hospital Association is taking the COVID-19 outbreak more seriously than the American administration chaotically led by Donald Trump. Their best guess is 480,000 deaths in the USA as a direct result of expected infection to fatality modelling. This is based on their own ‘central estimate’ – the likelihood between best and worst-case scenarios. In the UK, the government is preparing for 100,000 deaths and taking the same central estimate – and both these figures align (more or less) with population numbers and virus infection modelling. Health systems will be very severely stretched over the coming months.

The first reported case of Coronavirus in Italy was January 31st. It has taken just five weeks to see 16 million residents in quarantine and enhanced police powers to enforce a lockdown. Lombardy and 14 provinces in four other regions are in lockdown after the number of COVID-19 cases has increased by 1,247 in 24-hours. That escalation will continue and it is not out of the realms of logical thinking that within the next four weeks a hundred million people in the West alone could be in the same situation.

COVID-19 is one more strain of an evolving line of disease that undergoes a metamorphose each time it emerges, seemingly with even more deadly outcomes and a different target group in its crosshairs – always seeking out our most vulnerable. With no real countermeasure or cure, we all have to look out for one another. However, in today’s fractured communities and divided politics, the potential for blaming particular ethnic or social groups for epidemics in our own country or global pandemics more widely is huge. The reality is that we are – literally, all in this together and will be more successful in combatting it with that mindset. It won’t happen that way – one only has to look at the panic buying of certain goods to see people selfishly looking after themselves. Extrapolate that when certain goods become scarce and another set of problems emerges from the underbelly of society.