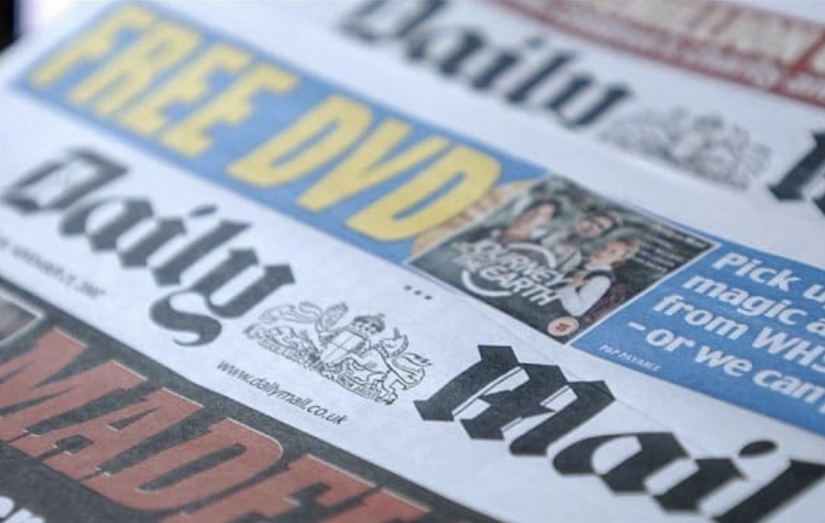 The European Commission in the UK has created an archive of the entirety of what is termed as ‘Europmyths.’ They’ve collated the data all the way back to the 1990s, mainly so that when EU official s are presented with fabricated or fake news, misinformation or propaganda, they have a reference point to stand their ground and respond accordingly with the facts.

The dedicated web page list literally hundreds of articles, so what I did was randomly select one article from each letter of the alphabet on the index. It gives in most cases a list of news outlets creating these false stories. So of the 24 letters in the alphabetically (U and X had no headlines listed) indexed webpage, my random sample saw nine newspapers publishing nonsense. I’m only including the mainstream newspapers, not regional or local. The worst perpetrators were, as expected, the Daily Mail, hastily followed by the Sun and The Express. They racked up well over half (56%) of fake news stories between them on my small sample.

Some are really shocking in their outright lies. How about this one from the Daily Mail – ‘Patients ARE at risk from thousands of EU medics.’ The article made outrageous statements such as –“European laws prevent watchdog from testing medical skills of those from EU as it would impede their right to freedom of movement.” Another lie was that there were – “repeated attempts to persuade EU officials to let Britain introduce the checks had always been flatly rejected.” 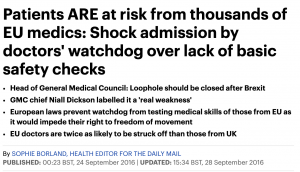 This is the response by the EU Commission on this particular article – It is out of the question that EU rules would require the UK to let linguistically or medically incompetent doctors practise. In fact, the rules – recently further reinforced in agreement with the UK – expressly require Member States to prevent such people from being employed.

Yet, the Daily Mail runs yet another misleading front-page article on 24 September headlined “Patients at risk from EU doctors” and alleging that “thousands of EU doctors can work in the UK without basic safety checks.” Online, the headline becomes an even greater insult to about 30,000 “EU doctors” – 10% of the total – working in the NHS.

Here is the reality from the horse’s mouth on the frontlines of the NHS – “Following the result of the referendum, the number of European Economic Area (EEA) staff who have left the Nursing and Midwifery Council (NMC) has tripled, with almost 4,000 staff members leaving between 2017 and 2018. However, within the same time frame, only 805 members registered with the NMC, which is just 13% of the 6,382 staff that entered the UK in 2016-17. There are over 60,000 European workers currently in the NHS, however, the lack of new migrant workers has left the NHS with a real-terms loss of around 40,000 nurses.”

The Daily Mail has put the country at risk by propagating fake news in order to persuade people to think in a certain way. It has helped to weaken Britain’s most basic infrastructure – that of its health service, which will put people’s lives at risk.

There is a plethora of other such nonsense.

The list of fake news would, in fact, be really funny to anyone, except, it was largely the efforts of these national newspapers who have huge political sway over the national narrative that has caused the chaos in Britain today. They’ve done it with fake news. Over the years it has been a sustained onslaught of lies.

Have a look at the Euromyths A-Z Index BY CLICKING ON THE LINK and start seething as you navigate through an ocean of deception, dishonesty and disinformation.

Lagarde: It’s even worse than we thought