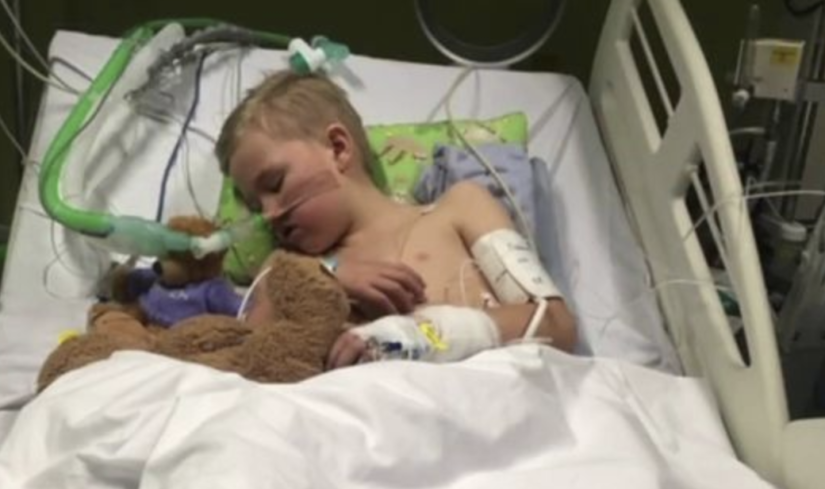 By James Cusick: A mother is on the telephone to NHS 111 for 60 minutes. There is no answer. Her child stops breathing while she is on the call. She had been to her GP. There is a seven-week history of headaches and vomiting. The child dies in hospital.

Another child is waiting for a liver transplant, unwell for five days. The parents did not bring the child to hospital believing exposure to coronavirus brought added risk. The child suffers liver failure and blood poisoning. The child dies in the district general hospital.

There are phone consultations with a GP over a child with fever, vomiting and diarrhoea. Eventually, the child is brought to hospital after suffering seizures. The severely ill child has lost half their red blood cells and is suffering profound kidney failure. Only with emergency renal support does the child improve.

A mother says she stayed at home due to the official COVID advice not to attend unless seven days of fever have passed. The child is eventually brought to hospital four or five days after the onset of fever, headaches and vomiting. The delay means the child is now severely ill with meningococcal disease.

On the same official COVID advice, a sick child is kept at home. The child is suffering from Kawasaki’s disease, an inflammatory condition which can affect the heart. Urgently needed treatment is delayed.

These are just some of the details from a dozen severe cases logged since the virus lock-down in just one paediatric regional network in England. The children described are between six months and 13 years of age.

Senior physicians have confirmed to openDemocracy that the situation in other regions of the UK, where COVID-19 has hit hard, is likely to be similar.

In order to protect medical and patient confidentiality, openDemocracy has not named the network which logged these cases, nor offered more information from the COVID-19 incident log that could lead to patients or the hospitals being identified.

But these are real cases, not anecdotal evidence or details casually passed on. They are from an NHS paediatric service and show a worrying pattern that the parents of sick children are hesitating before bringing their kids to hospital.

The government’s stay-at-home message, designed to back-up social distancing and prevent the spread of the coronavirus, is appropriate for adults – but dangerous for children.

Paediatricians are calling for an urgent change in the government’s message and official advice for sick children. As one physician told openDemocracy: “Children can die of these diseases mentioned here. That, sadly, will not change. But what is making the difference is that we are seeing these children later than usual, and it is this late presentation that needs to be addressed or things will only get worse.”

Last week it was revealed that the president of the Royal College of Paediatrics and Child Health (RCPCH), Professor Russell Viner, privately contacted the Chief Medical Officer for England, Professor Chris Whitty, urging an immediate change in the government’s public information strategy.

Central to Viner’s concern was the very low number of children currently coming to hospitals and the hugely reduced numbers being referred by GPs.

Paediatricians from across the UK have also reported to the RCPCH that children are arriving at hospital with illnesses at a far more advanced stage than they would normally see.

Children as ‘collateral damage’ of coronavirus

Although NHS England and the Department of Health have recently said that people should always go to hospital if they need urgent care, there is still no specifically tailored message for parents of sick children.

For some frontline paediatricians, the child illness advice available on NHS 111 is not good enough. They have urged an immediate change in the messaging strategy to prevent children becoming, as one consultant put it, the “collateral damage of this pandemic”.

The BBC has reported that Dr Richard Brown, a consultant paediatrician at Addenbrooke’s Hospital in Cambridge, said there were “recurrent themes” – ruptured appendixes and severe sepsis – affecting young children who had not come to hospital as soon as they should.

The incident log seen by openDemocracy shows that the situation at Addenbrooke’s is an example of what is happening across England. 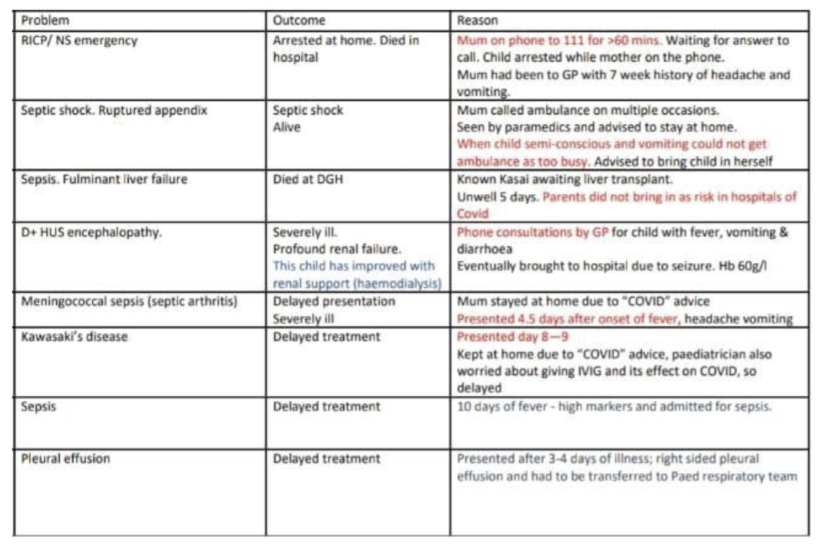 A mother calls the ambulance on multiple occasions about her unwell child. She is eventually advised by paramedics to stay at home. When her child becomes semi-conscious and is vomiting, the ambulance service is too busy. She is then advised to bring the child to hospital herself. The child has a ruptured appendix and is suffering from sepsis (blood poisoning) that could kill. Although suffering from septic shock, the child survives.

Another child, ill for three or four days, is eventually brought to hospital and diagnosed with “right-sided pleural effusion”: water on the lungs, likely pneumonia. The child requires immediate transfer to a paediatric respiratory team. Delayed treatment is listed as the outcome.

A child suffering from ongoing fits is given significant amounts of seizure drugs at home by parents worried about calling an ambulance. This results in a loss of consciousness. Eventually, an ambulance is called and the child is taken to hospital and found to be COVID positive. Non-stop seizures are listed in the incident log.

A child is known to their local hospital. They have recently been seen for asthma. The parents notice increased breathing and distress at home and increase the use of the asthma drug, salbutamol. They call 999 and are told it will be three hours until an ambulance can come. The parents drive to their local hospital. Delayed treatment is eventually given to the child who suffers a near cardiac arrest. The child is close to stopping breathing but survives.

All these cases come from the same official incident log. The worry among many doctors is that this pattern is typical across the country.