George Monbiot – The Problem With Freedom 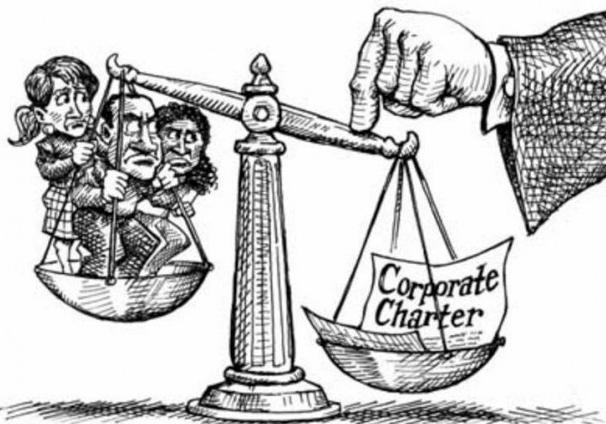 Freedom is used as the excuse for ripping down public protections on behalf of the very rich. Propaganda works by sanctifying a single value, such as faith, or patriotism. Anyone who questions it puts themselves outside the circle of respectable opinion. The sacred value is used to obscure the intentions of those who champion it. Today the value is freedom. Freedom is a word that powerful people use to shut down thought.

When think tanks and the billionaire press call for freedom, they are careful not to specify whose freedoms they mean. Freedom for some, they suggest, means freedom for all. In certain cases, this is true. You can exercise freedom of thought and expression, for example, without harming other people. In other cases, one person’s freedom is another’s captivity.

When corporations free themselves from trade unions, they curtail the freedoms of their workers. When the very rich free themselves from tax, other people suffer through failing public services. When financiers are free to design exotic financial instruments, the rest of us pay for the crises they cause.

Above all, billionaires and the organisations they run demand freedom from something they call “red tape”. What they mean by red tape is public protection. An article in the Telegraph recently was headlined “Cut the EU red tape choking Britain after Brexit to set the country free from the shackles of Brussels”. Yes, we are choking, but not on red tape. We are choking because the government flouts European rules on air quality. The resulting air pollution frees thousands of souls from their bodies.

Ripping down such public protections means freedom for billionaires and corporations from the constraints of democracy. This is what Brexit – and Trump – are all about. The freedom we were promised is the freedom of the very rich to exploit us.

To be fair to the Telegraph, which is running a campaign to deregulate the entire economy once Britain has left the EU, it is, unusually, almost explicit about who the beneficiaries are. It explains that “the ultimate goal of this whole process should be to … to set the wealth creators free.” (Wealth creators is the code it uses for the very rich). Among the potential prizes it lists are changes to the banana grading system, allowing strongly curved bananas to be categorised as Class 1, a return to incandescent lightbulbs and the freedom to kill great crested newts.

I suspect that the Barclay brothers, the billionaires who own the Telegraph, couldn’t give a monkey’s about bananas. But as their business empire incorporates hotels, shipping, car sales, home shopping and deliveries, they might be intensely interested in the European working time directive and other aspects of employment law, tax directives, environmental impact assessments, the consumer rights directive, maritime safety laws and a host of similar public protections.

If the government agrees to the Telegraph’s proposed “bonfire of red tape”, we would win bent bananas and newt-squashing prerogatives. On the other hand, we could lose our rights to fair employment, an enduring living world, clean air, clean water, public safety, consumer protection, functioning public services and the other distinguishing features of civilisation. Tough choice, isn’t it?

As if to hammer the point home, the Sunday Telegraph interviewed Nick Varney, the chief executive of Merlin Entertainments, in an article claiming that the “red tape burden” was too heavy for listed companies. He described some of the public protections companies have to observe as “bloody baggage”. The article failed to connect these remarks to his company’s own bloody baggage, caused by its unilateral decision to cut red tape. As a result of overriding the safety mechanism on one of its rides at Alton Towers, which was operating, against the guidelines, during high winds, 16 people were injured, including two young women who had their legs amputated. That’s why we need public protections of the kind the Telegraph wants to destroy.

The same ethos, with the same justification, pervades the Trump administration. The new head of the Environmental Protection Agency, Scott Pruitt, is seeking to annul the rules protecting rivers from pollution, workers from exposure to pesticides and everyone from climate breakdown. It’s not as if the agency was over-zealous before: one of the reasons for the mass poisoning in Flint, Michigan was its catastrophic failure to protect people from the contamination of drinking water by lead: a failure that now afflicts 18 million Americans.

As well as trying to dismantle the government’s climate change programme, Trump is waging war on even the most obscure forms of protection. For example, he intends to defund the tiny US Chemical Safety Board, which investigates lethal incidents at chemical plants. Discovering what happened and why would be an impediment to freedom.

On neither side of the Atlantic are these efforts unopposed. Trump’s assault on public protections has already provoked dozens of lawsuits. The European Council has told the UK government that if it wants to trade with the EU on favourable terms after Brexit, companies here cannot cut their costs by dumping them on the rest of society.

This drives the leading Brexiters berserk. As a result of the Pollution Paradox (the dirtiest corporations have to spend the most money on politics, so the political system comes to be owned by them), politicians like Boris Johnson and Michael Gove have an incentive to champion the freedom of irresponsible companies. But it also puts them in a bind. Their primary argument for deregulation is that it makes businesses more competitive. If it means those businesses can’t trade with the EU, the case falls apart.

They will try to light the bonfire anyway, as this is a question of power and culture as well as money. You don’t need to listen for long to the very rich to realise that many see themselves as the “independents” Friedrich Hayek celebrated in The Constitution of Liberty, or as John Galt, who led a millionaires’ strike against the government in Ayn Rand’s novel Atlas Shrugged. Like Hayek, they regard freedom from democracy as an absolute right, regardless of the costs this may inflict on others, or even on themselves.

When we confront a system of propaganda, our first task is to decode it. This begins by interrogating its sacred value. Whenever we hear the word freedom, we should ask ourselves, “freedom for whom, at whose expense?”.

This article is published with permission from George Monbiot.George Monbiot is a British writer known for his environmental and political activism. He writes a weekly column for The Guardian and is a bestselling author. His latest book is How Did We Get into This Mess? Politics, Equality, Nature. His latest project is Breaking the Spell of Loneliness, a concept album written with the musician Ewan McLennan. This article first appeared at www.guardian.co.uk